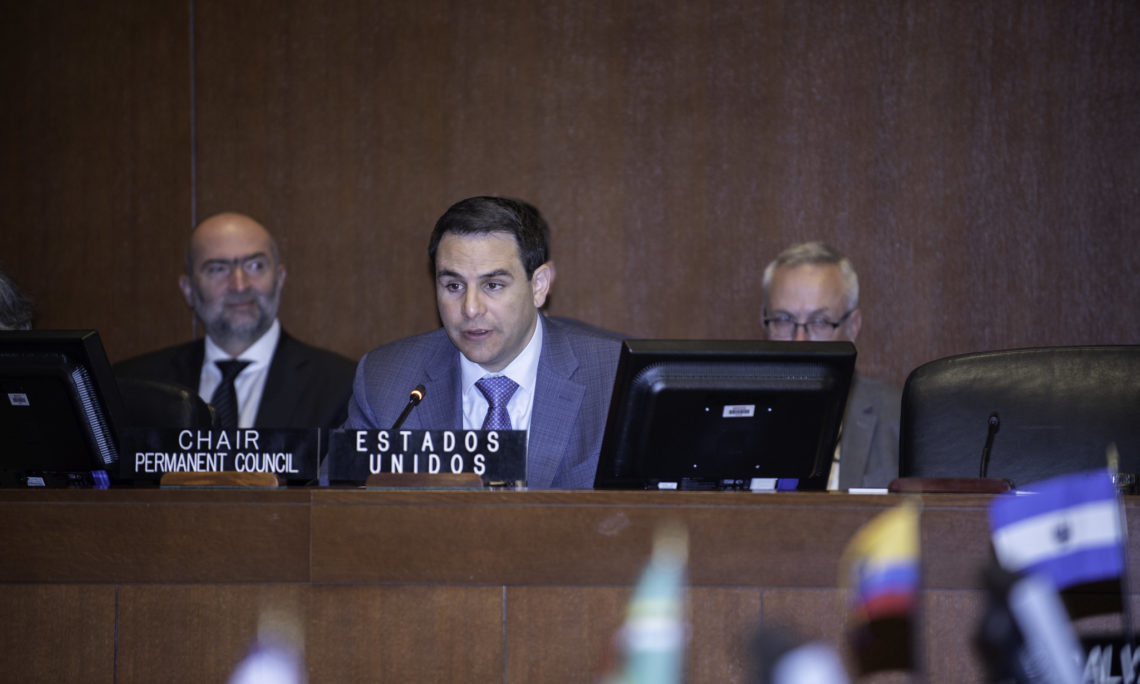 Ambassador Carlos Trujillo, Chair of the OAS Permanent Council and Permanent Representative of United States of America to the OAS presides over a Protocolary Meeting to commemorate Panamerican Day and Week, April 17, 2019.

In October 1889, the nations of the Americas convened in Washington, D.C., at the First International Conference of the American States, to strengthen the bonds of friendship among the countries of the Western Hemisphere and to consider opportunities for improved cooperation.  This conference set the foundation for the Organization of American States, which was eventually established in 1948 and today serves as the primary international forum for the countries of the Western Hemisphere.  As we celebrate this Pan American Day and Pan American Week, nearly 130 years after the First International Conference, the United States proudly continues to stand in solidarity with the nations of the Americas.  Together, we commemorate the progress we have made toward our shared goal of a hemisphere united in democracy, prosperity, and security.

The people of the Americas are bound together by much more than geographic proximity.  From the earliest days of the inter‑American system, we have shared a deep respect for liberty.  Enshrined in the Charter of the Organization of American States is a declaration that “representative democracy is an indispensable condition for the stability, peace, and development of the region” and that “the historic mission of America is to offer to man a land of liberty.”  We remain committed to freedom and a strong and interconnected Western Hemisphere in the face of current challenges.

Together, the nations of America must continue to confront oppression and advocate for freedom ‑‑ both in the region and around the globe.  Sadly, the people of Cuba, Venezuela, and Nicaragua continue to live under tyranny and authoritarianism.  The brutality and corruption of the illegitimate former regime in Venezuela has crippled the country and brought it to ruin.  We must not forget that the struggle is one between dictatorship and democracy, between oppression and freedom, and between continued suffering for millions of Venezuelans and an opportunity for a renewed future of freedom and prosperity.  The community of democracies in our Western Hemisphere must continue to support the people of Venezuela, Cuba, and Nicaragua as they fight for the restoration of democracy and liberty.

Despite such challenges, the countries of the Americas have made substantive progress on issues such as trafficking and crime, poverty reduction, and safety.  The United States has worked with its partners to disrupt transnational criminal networks, stem drug and human trafficking, enhance citizen security, and strengthen border security.  We will continue working cooperatively in the Americas and throughout the world to promote the rule of law and give the people of our countries every opportunity to thrive. On Pan American Day and during Pan American Week, the nations of the Americas renew our common mission of advancing freedom in our hemisphere.  Through unmatched levels of trade and investment, steady cooperation, and investment in the well‑being of people from all walks of life, we are helping to secure prosperity and security for future generations.

IN WITNESS WHEREOF, I have hereunto set my hand this twelfth day of April, in the year of our Lord two thousand nineteen, and of the Independence of the United States of America the two hundred and forty-third.