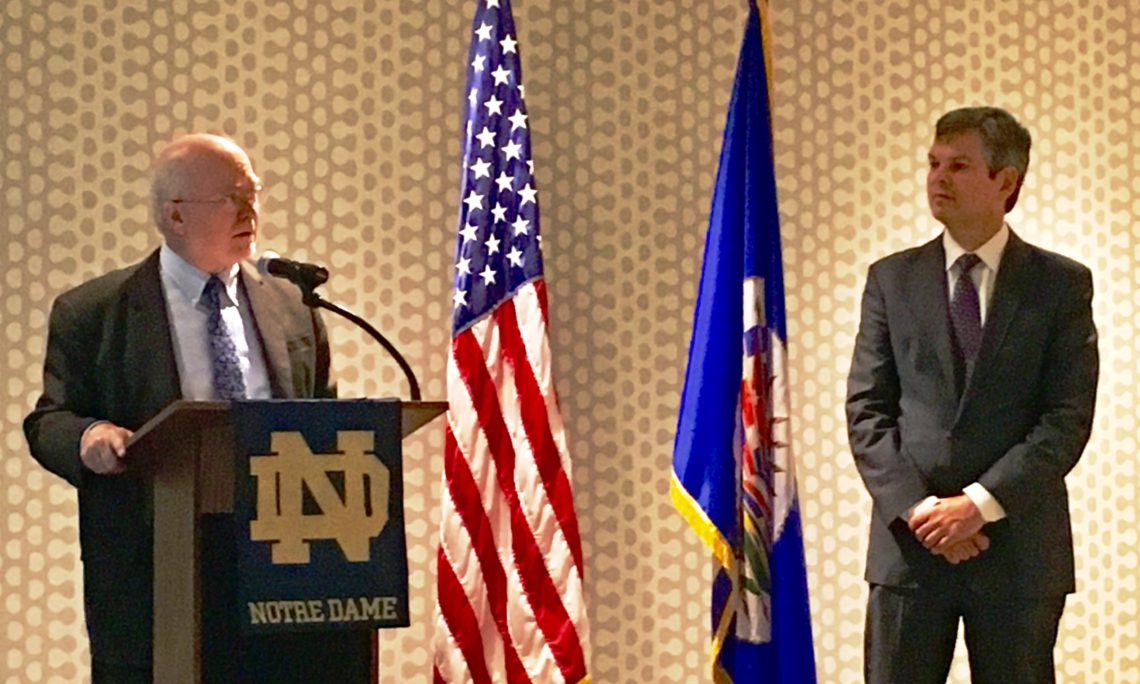 I want to welcome and thank you all for coming this evening.

I am pleased that so many members of the Inter-American Commission’s Executive Secretariat, OAS Secretariat, and representatives of OAS Permanent Missions could join us.   This has been a momentous week at the OAS, but tonight our focus is on the work of the Inter-American Commission on Human Rights. The Commissioners who give their time and talent to defend and promote human rights across our Hemisphere merit our recognition — as do the hard-working staff and Secretariat members who support their efforts.

In this vein, I want to acknowledge the important efforts of Commissioner James Cavallaro, who is unable to join us this evening.  In addition to his fundraising work over the past year, Jim took valuable steps as Commission President to help broaden access to the Inter-American human rights system – through training — for attorneys and nationals from the Caribbean.

I want to recognize some other distinguished guests who are with us today: members of civil society and human rights defenders, who often risk their own and their families’ lives and safety to advocate for universally-recognized human rights.

We are also joined by some former U.S Ambassadors to the OAS — Hattie Babbitt and John Maisto.  I am pleased they could join me this evening in support of Doug Cassel’s candidacy.  And I would like to recognize Amy Griffith, Doug’s wife, who is also able to join us this evening.

Let me begin my brief comments by underscoring the importance and value that the U.S. government places on our collective efforts at the OAS to strengthen the Commission — while also respecting the Commission’s independence and integrity.

I also want to recognize the commitment all our governments and organizations have made to enhance and improve our human rights system.  We have had some encouraging discussions in recent months on how to broaden the sources of funding to the Commission, which reflects the clear consensus within the OAS on the importance of strengthening the Commission.

It is now my privilege to introduce our U.S. candidate to the Commission, Doug Cassel of Notre Dame Law School.  Professor Cassel is highly-respected in the field of human rights and international law.  He also has extensive expertise in our regional human rights system.  He has lived and worked in several countries in the region, and speaks both English and Spanish.

Doug co-founded the International Human Rights Law Institute of DePaul College of Law, and he also served as the director of two other human rights centers — at Northwestern University School of Law and at Notre Dame Law School.  He has also represented victims in various cases before the Inter-American Commission as well as the Court.

Quite simply, Doug has dedicated his career to human rights—in both his scholarly research and his legal practice. We are proud of him and quite fortunate that he has agreed to serve as our candidate this year.  I would now like to speak a bit in Spanish for the benefit of our many Spanish-speaking colleagues.

With these brief comments, I invite you to meet Doug and talk to him about what he would hope to bring to the Commission.  And I look forward to seeing many of you in the coming days and weeks as we finalize preparations for the upcoming OAS General Assembly in Mexico.

I would now like to introduce Thomas Kellenberg, the Executive Director of Notre Dame University’s Washington Program — where he teaches courses in law, public policy and human rights. Tom has also spent a number of years in Latin America working with various human rights organizations.  He will provide some comments in representation of the Dean of Notre Dame Law School, Nell Jessup Newton.

Professor Kellenberg, thank you for the strong support of Notre Dame University in co-hosting this special event.  The floor is yours.