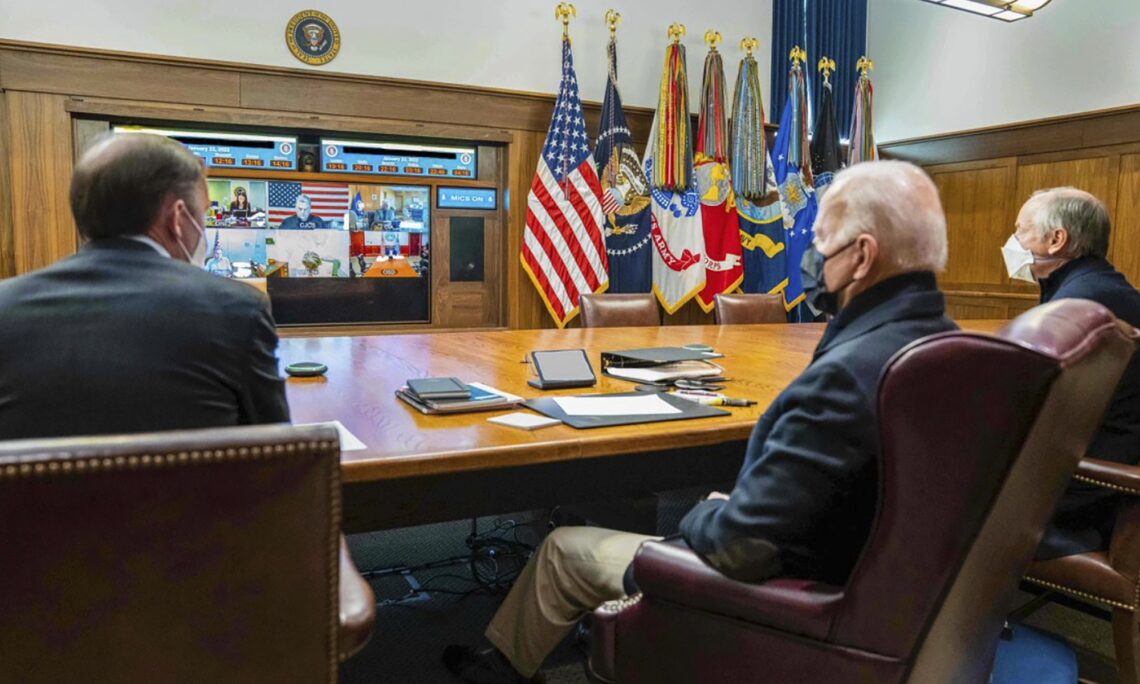 In this photo released by The White House, President Joe Biden, center, meets virtually with his national security team and senior officials to discuss Russia's aggressive actions toward Ukraine, Saturday, Jan. 22, 2022, at Camp David, Md. (The White House via AP)

Chairman, I would like to take the opportunity to briefly comment on Russia’s miliary buildup in and around Ukraine and its impact on the Western Hemisphere.

Russia’s actions threaten a renewed crisis not only for Ukraine, but for the wider world.  Russian aggression puts the sovereignty and territorial integrity of all states at risk by implying that a country can change the borders of another by force.  Russia’s actions violate basic tenets of our international system that are vital to peace and security.

The United States government remains concerned that Russia’s aggression towards Ukraine and attempts to overturn the European security order could spill over to the Americas. This order is based, inter alia, on the right of states to choose their own path internationally, without interference from neighboring states; on the rejection of so-called spheres of influence; and on the rejection of the threat or use of force to change international boundaries.

We call on our partners in the Hemisphere to reject Russia’s attempts to provoke conflict in Ukraine and beyond.

As the United States and others in the international community work diplomatically to deter a further Russian invasion of Ukraine, we must take seriously Russia’s threat to extend any potential conflict, including into the Americas.

This is a time of extraordinary international tension.  We all should do what we can to prevent those tensions from deepening in our region.

We must prevent Russian destabilizing activity from spreading further into this Hemisphere.

We urge all to use your relationships—especially within the Hemisphere—to make clear your opposition to Russian aggression toward Ukraine and any attempts to export its aggression to the Americas.

As Secretary Blinken stated, “diplomacy is the only responsible way to resolve this crisis.”

The United States urges you to advocate for diplomacy and denounce actions that challenge the international order that we, working together, have sought to build, sustain, and adapt.

We look forward to working with all in the OAS to uphold the values of the international system, and urge Russia to choose the path of diplomacy.