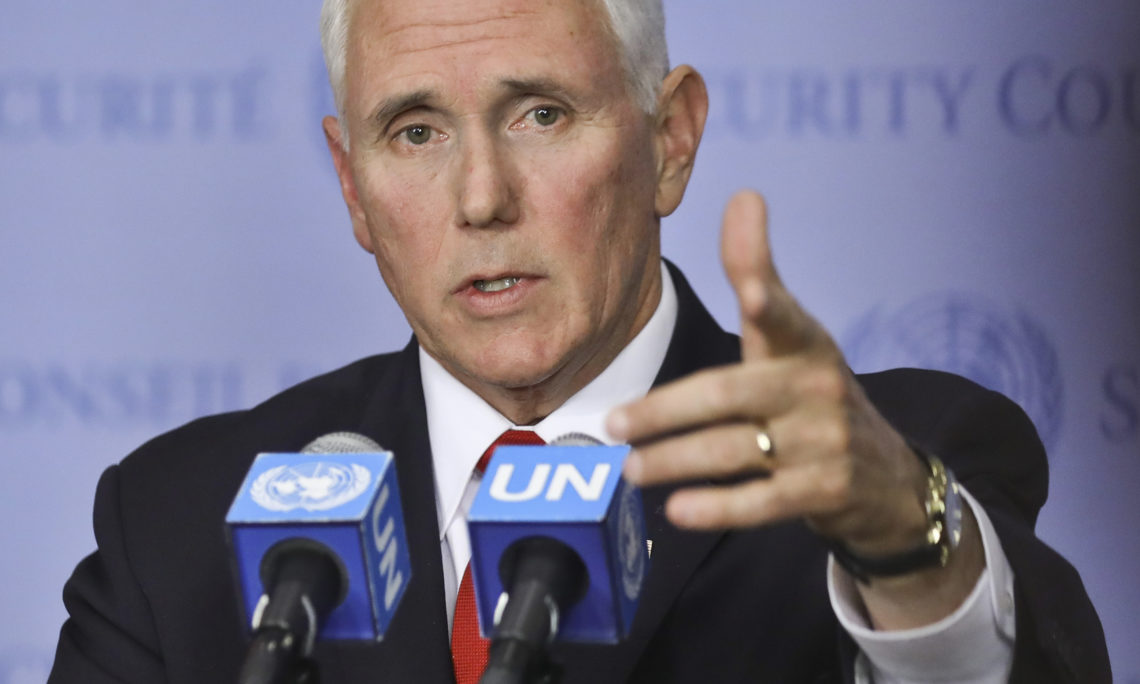 THE VICE PRESIDENT: Well, thank you all for being here. I just completed a meeting with the Secretary General and completed addressing the United Nations Security Council. The President directed me to be here because the United States of America is standing with the people of Venezuela, and we will continue to stand for the restoration of freedom and the rule of law in Venezuela.

The Venezuelan people have stepped forward. Even today, by the thousands, the people of Venezuela have taken to the streets to stand for the restoration of democracy, the rule of law, and their libertad.

Coming here today to the Security Council, our message is simple: It’s time for the United Nations to act. Just yesterday, the Organization of American States recognized the government of President Juan Guaidó and their official representative. The United States was proud to be the first nation in the world to recognize Interim President Juan Guaidó as the legitimate President of Venezuela. Now 54 nations around the globe have joined us in common cause.

But it’s time for the U.N. to act. This institution was created in the aftermath of the Second World War to advance the interests of peace and security. But it was born in the realization among nations around the world that, when dictators arise in nations and oppress their own people, that nations collapse and failed states know no boundaries. We saw the aggression in the last century. And today, we’re seeing Venezuela spinning into greater deprivation and oppression. And today, we call on the United Nations to speak with one voice.

The time has come for the United Nations to recognize Interim President Juan Guaidó as the legitimate President of Venezuela and seat his representative in this body.

I’d be happy to take your questions.

Q Thank you. Thank you. Michelle Nichols from Reuters. First of all, can you clarify: This will be a General Assembly resolution, not a Security Council resolution?

What makes you think the U.S. has the support needed to revoke the credentials of Maduro’s representative? Because it seems, after talking to people around here, that you don’t.

And did the U.S. think that this — that ousting Maduro would happen quicker? Has this taken longer than you expected?

All options are on the table, but as the President said, the economic sanctions that we brought to bear on Venezuela, can be a lot tougher. And the President is prepared to take even additional action.

But today we call on the world to act through the diplomatic power of the one voice of the United Nations. Our team here at the U.S. Mission at the United Nations is working on a resolution that would revoke the credentials of the representative of the Maduro regime and would recognize Interim President Juan Guaidó and seat his representative here.

We’re — we’ll — we’re looking at bringing that resolution to the body in some form, but I will leave it to them to determine, as we discussed today with the Secretary General, what the proper venue is under the structure of the United Nations.

Q What makes you think you have the support?

But now it’s time for this body, this historic institution, to step forward and to give voice to that momentum. And we’re going to be reaching out to nations across the world to join us in this resolution and to have the United Nations speak on behalf of the people of Venezuela.

Q Mr. Vice President, this is Majeed Gly, Rudaw Media Network. In your remarks, you talked about Iran’s role, even in Venezuela, and recently — just yesterday, your administration announced new sanctions against Iran’s Revolutionary Guard.

Q What is next in terms of Iran? What does this administration hope will happen in terms of the Iranian activities throughout the globe and in terms of — in the region, in the Middle East especially?

THE VICE PRESIDENT: Well, under President Trump’s leadership, the United States has been marshaling support across the Arab world to confront the malign influence and violence that’s exported by Iran across the region, and we’ll continue to do that. The designation this week of the Iranian Revolutionary Guard as a terrorist organization is a part of that.

Look, the President withdrew the United States from the disastrous Iran nuclear deal, and now we see Iran’s economy is struggling as a result.

We’re just going to continue to stand up, and to stand up to the ayatollahs in Iran, confront them for their malign influence in the region. But we’re also going to stand with the people of Iran who, even this year, have taken to the streets to see freedom restored in their country.

So, we’ll — all these steps are designed to demonstrate this is a President who embraces his role as leader of the free world. But with regard to Venezuela — whether it be Russia or whether it be Iran — the President’s message is very clear: Russia and Iran have no business in Venezuela. They should step aside and allow the people of Venezuela to restore their democracy and their freedom.

Q Thank you. It’s Pamela Falk from CBS News. Mr. Vice President, would you elaborate on the options open to the United States when all options are on the table — military? Would you say what those are?

THE VICE PRESIDENT: President Trump had made clear that all options are on the table. Venezuela is a failed state, and failed states know no boundaries. Venezuela has become a hub of criminal activities, cartels, terrorist organizations that not only oppress their own people and bring violence to those who oppose the Maduro regime, but they’re also spreading that violence throughout the region, and threatening allies across the region and threatening the interests of the United States of America.

So the President has made it very clear we’re going to continue to take decisive steps to bring economic and diplomatic pressure to bear on Venezuela and on those who are supporting the corrupt Maduro regime. But all options are on the table, and the President is determined to see this through until we see democracy and libertad restored for the people of Venezuela.

Q What is the red line for this administration regarding Russia’s involvement in the Western Hemisphere and Venezuela? And I just want to go back —

THE VICE PRESIDENT: I’m sorry, I didn’t hear the first part of your question.

Q What is the red line for this administration regarding Russia’s involvement in Venezuela and the Western Hemisphere at large? And also, I want to reiterate the question on “all options on the table.” It’s something that this administration reiterates all the time. And is military intervention any more of a closer possibility than it was before, given then worsening situation?

THE VICE PRESIDENT: Katie, on the first question, I think the President has made it clear that Russia needs to get out of Venezuela. Russian aircraft landing in Venezuela, bringing personnel of a non-descript nature into the country in some security role or advisory role, is just unacceptable.

The people of Venezuela are suffering. Three million people have fled the deprivation and the oppression of the Maduro regime. Two million more are poised to flee that country again.

I would say that when we say “all option are on the table,” that means that it’s no more or no less true today than it was when the President first said it in 2017. President Trump has made it clear from early in this administration we’re absolutely determined to see freedom and democracy restored in Venezuela. It’s in the interest of the people of Venezuela. It’s in the interest of the United States of America.

And we’re going to continue to stand strong and make it clear that we are going to stand firm until Nicolás Maduro steps down from power and the people of Venezuela are able to restore their democracy with Interim President Juan Guaidó.

Thank you all very much.