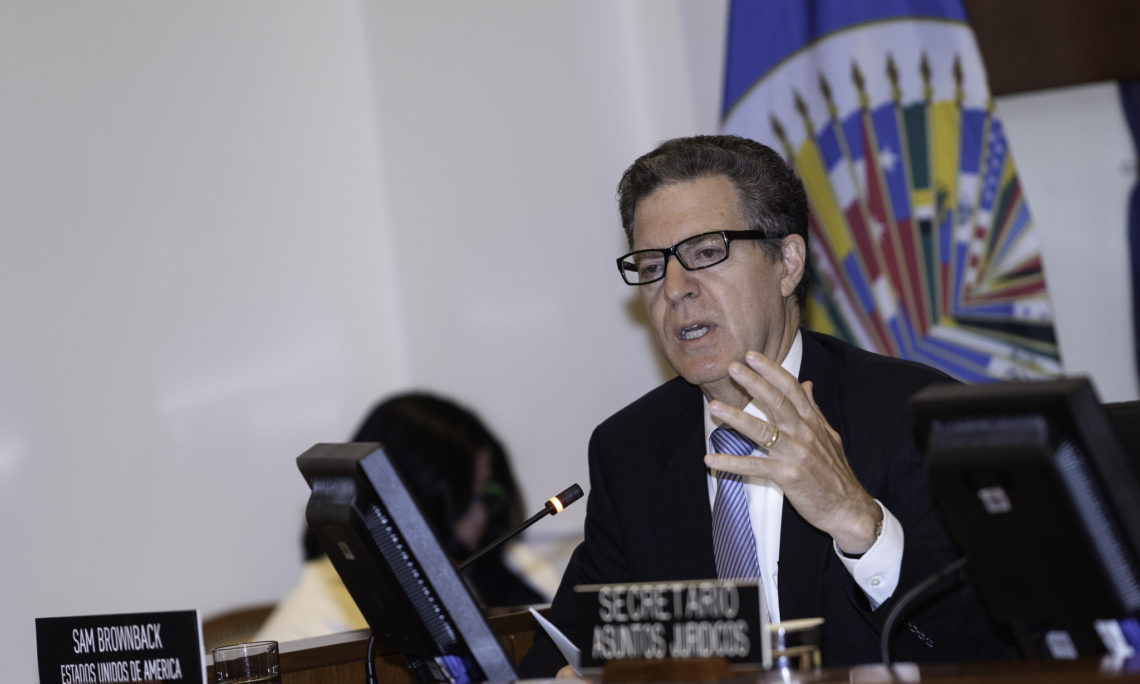 If I could provide a quick summary to you at the outset of my presentation, the United States is a strong proponent of religious freedom. We believe in it, we believed in it from our founding as a nation. It’s our first amendment. It is a topic that we are strongly pursuing in this administration.

We do this because it is a universal right. In our estimation and in our founding documents this is a God given right that no government has the right to interfere with, that you are entitled to do with your own soul as you see fit.

To have a faith, to not have a faith, to transfer and pick a different course of action. And this is all your right. To be able to do and that the role of government is to protect the right of religious freedom. It is not to pick a winner or loser. It’s not to pick on a particular faith or favor another one. It’s to protect the right to religious freedom. Period. Full stop. And we are going to pursue this aggressively.

A number of you saw, some of you attended, the Ministerial we recently did at the end of July on religious freedom. Where we called together a number of nations from around the world. Eighty-four nations came to the Ministerial, first ever by our count that we’ve been able to see- on the topic of religious freedom. We hope to have follow on regional conferences. I’ve already been contacted by Europeans about a follow on conference- a regional religious freedom conference that they will be putting on and putting forth. We hope one will be hosted in the Western Hemisphere, perhaps by a nation represented here today to pursue the topic of religious freedom and to promote it in our hemisphere. And we want to continue to push this. The Secretary of State, Secretary Pompeo, has already announced that there will already be another religious freedom summit next year here in Washington D.C. We had over 400 civil society and religious groups. I would anticipate that number would double or triple this next year. We would hope to have more countries involved as well.

That is this a key time in human history to purse this right and that it’s not only about this human right, but this right is a basic right that out of which several other rights will flow more aggressively. We’ve seen in our academic studies that the more a nation embraces religious freedom the less terrorism is in that nation. We’ve seen that where more a nation involves itself and guarantees this right to religious freedom in their nation, there’s more economic growth that comes out of the nation. Were seen where nations give more religious freedom, that there is a spiritual capital that’s released in the nations.

Of goodness and of things these groups can and will do- of forming hospitals, and civil societies and schools and providing help for the poor. That you release this spiritual capital into the atmosphere of that nation when religious freedom is released as well. So that this isn’t a right just in and of itself, although that is significant, and important and profound and part of our human dignity. But it also releases other things that are positive for the world community.

We seek more partnership with people in the Organization of American States and in the Western Hemisphere. Most of this region guarantees and pursues religious freedom. We hope you can work with us around the world. There are problem spots in our own hemisphere and I will address some of those later in my comments.

A couple of things that we would like for you to consider doing, this organization or countries here. Number 1: we would ask that somebody in this room would step up and host a regional religious freedom summit before the next one that we would do and that this would be something that a nation would step up and say we’re going to host this and were going to pursue this in our hemisphere of a religious freedom summit. And what we can do as nations in our hemisphere to pursue this.

You will have relationships and capacities in places that the United States does not have and we hope to work in partnership on the pursuit of religious freedom.

Other OAS countries participating with the ICG include Argentina, Chile, and Mexico. We would hope other nations in this hemisphere would join the international contact group.

Knox Thames is here from our office. Knox, if you would please stand briefly, I would appreciate that and has worked that group for our office for many years. It’s an important group where there is communication taking place on real time of events that are taking place now and then groups and nations can work together to pursue religious freedom in a particular area of interest.

As I stated, we’d like to see more countries from our hemisphere join the International Contact Group. The Italian mission to the OAS hosted an ICG meeting last year in Washington to encourage greater OAS member state participation. And we look forward to continuing to serve as a committed partner in advancing this important work.

Religious freedom is a truly shared value of the Americas, and your voices can have important influences. As I stated earlier where perhaps ours may not. But certainly together our voices are stronger than they are separately. For instance, Iran continues to systematically, and ongoing, and have egregious violations of religious freedom against Baha’is, Christians, Sunni Muslims and even some groups of Shia Muslims who disagree with the theocratic regime. While the United States will continue to highlight those abuses and press for reform, many of your governments have relationships with Tehran that could be quietly used to advance religious freedom. We have seen how quiet advocacy from OAS member states helped pastors be freed from jails in Iran. That we have witnessed.

And on another topic- while our hemisphere generally respects this right of religious freedom, there are still problems. Like the worsening situation unfortunately in Nicaragua and Venezuela. Concerns that are shared by many present here today.

President Ortega has been actively and unfortunately vilifying and attempting to divide the Catholic Church which he had initially called to serve as mediators in a national dialogue. This divisive rhetoric will not succeed and will only further delegitimize his government. We do applaud the Catholic Church for its unity in the face of government repression and encourage the broader religious community to express solidarity with them. We also welcome and support the ongoing monitoring and investigating efforts being advanced through the Inter-American Commission on Human Rights (IACHR) and its Nicaragua-specific mechanisms.

Madam Chair, the Venezuelan government is likewise obligated – as is every OAS member state – to respect the human rights and fundamental freedoms of all those living in the country, including the right to freedom of religion. By targeting religious leaders who are promoting peace and provide hope for believers, the Venezuelan regime is not fulfilling its obligations. We continue to stand strongly with the religious leaders, the Catholic Church and the Venezuelan people in their battle to restore their rights and their human dignity.

We are very concerned by the humanitarian crisis unfolding in Venezuela, and welcome the special Council meeting planned for this afternoon to address the situation. I want to thank you, again, distinguished members of this Council, for your warm welcome today. For your work and your effort and your partnership on religious freedom. Again, I am deeply honored and very much appreciative for all that you do to strive for peace and a more just world. Let us find new ways to work together to advance religious freedom for all. Religious freedom is in our collective DNA. Let’s take the best examples of the Americas and share them with other countries and organizations, and encourage them to do better. I look forward to our continued collaboration towards these goals. Thank you very much, God bless you all.