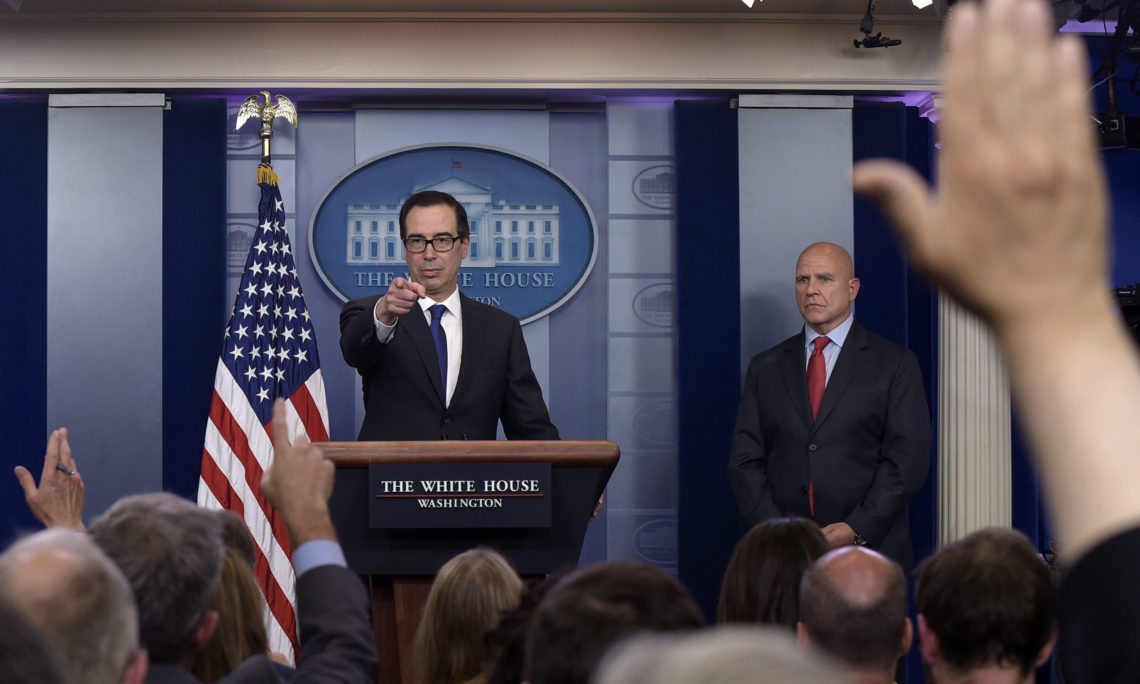 U.S. Department of the Treasury

Washington – Today, the U.S. Department of the Treasury’s Office of Foreign Assets Control (OFAC) designated the President of Venezuela, Nicolas Maduro Moros, pursuant to Executive Order (E.O.) 13692, which authorizes sanctions against current or former officials of the Government of Venezuela and others undermining democracy in Venezuela.  These sanctions come a day after the Maduro government held elections for a National Constituent Assembly (Asamblea Nacional Constituyente, or ANC) that aspires illegitimately to usurp the constitutional role of the democratically elected National Assembly, rewrite the constitution, and impose an authoritarian regime on the people of Venezuela.  As such, it represents a rupture in Venezuela’s constitutional and democratic order.  The Maduro administration has proceeded with the ANC even though Venezuelans and democratic governments worldwide have overwhelmingly opposed it as a fundamental assault on the freedoms of the Venezuelan people.  The creation of the ANC follows years of Maduro’s efforts to undermine Venezuela’s democracy and the rule of law.

As a result of today’s actions, all assets of Nicolas Maduro subject to U.S. jurisdiction are frozen, and U.S. persons are prohibited from dealing with him.

“Yesterday’s illegitimate elections confirm that Maduro is a dictator who disregards the will of the Venezuelan people.  By sanctioning Maduro, the United States makes clear our opposition to the policies of his regime and our support for the people of Venezuela who seek to return their country to a full and prosperous democracy,” said Secretary of the Treasury Steven T. Mnuchin.  “Anyone who participates in this illegitimate ANC could be exposed to future U.S. sanctions for their role in undermining democratic processes and institutions in Venezuela.”

Nicolas Maduro was elected President of Venezuela on April 14, 2013, following the death of former President Hugo Chavez.  Maduro held previous roles in the Venezuelan government, including as Executive Vice President and Minister of Foreign Affairs.

Under Maduro, the Venezuelan government has deliberately and repeatedly abused the rights of citizens through the use of violence, repression, and criminalization of demonstrations.  At his direction, the regime’s security forces have systematically repressed and criminalized opposition parties through arbitrary detention, military prosecution of civilians, and the excessive use of force against demonstrators.  Any member of the opposition or critic of the regime risks being detained, imprisoned, assaulted, tortured, and assassinated.

In addition to committing widespread human rights abuses, Maduro’s regime has mismanaged the economy and engaged in systemic corruption.  Despite having among the world’s largest oil reserves, tens of millions of Venezuelans are going hungry because the Government refuses to import sufficient food for the Venezuelan people, engages in rampant corruption around currency and the exchange rate regime, and rejects offers of humanitarian aid.

Treasury undertook the action, in consultation with the State Department, pursuant to Executive Order 13692.  The U.S. government and democratic governments worldwide continue to call on the Venezuelan government to halt the ANC process and allow Venezuela’s democratic processes and institutions to function as intended. We urge those who were elected to the Constituent Assembly to decline to take office.