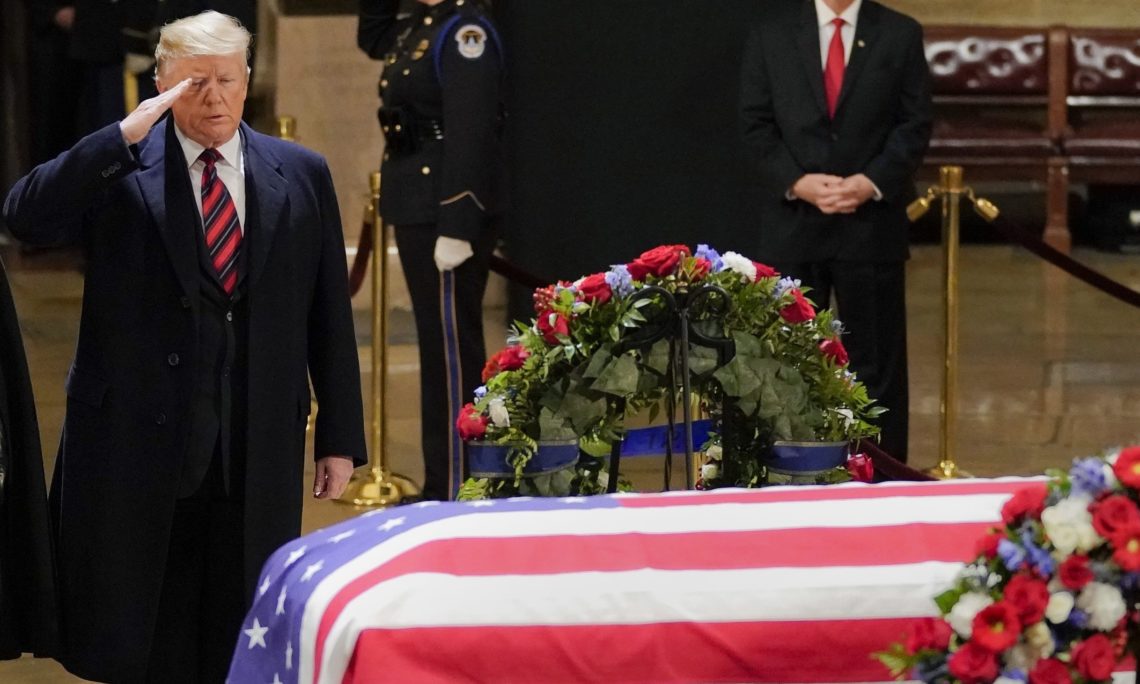 It is my sorrowful duty to announce officially the death of George Herbert Walker Bush, the forty-first President of the United States, on November 30, 2018.

President Bush led a great American life, one that combined and personified two of our Nation’s greatest virtues: an entrepreneurial spirit and a commitment to public service. Our country will greatly miss his inspiring example.

On the day he turned 18, 6 months after the attack on Pearl Harbor, George H.W. Bush volunteered for combat duty in the Second World War. The youngest aviator in United States naval history at the time, he flew 58 combat missions, including one in which, after taking enemy fire, he parachuted from his burning plane into the Pacific Ocean. After the war, he returned home and started a business. In his words, “the big thing” he learned from this endeavor was “the satisfaction of creating jobs.”

The same unselfish spirit that motivated his business pursuits later inspired him to resume the public service he began as a young man. First, as a member of Congress, then as Ambassador to the United Nations, Chief of the United States Liaison Office in China, Director of Central Intelligence, Vice President, and finally President of the United States, George H.W. Bush guided our Nation through the Cold War, to its peaceful and victorious end, and into the decades of prosperity that have followed. Through sound judgment, practical wisdom, and steady leadership, President Bush made safer the second half of a tumultuous and dangerous century.

Even with all he accomplished in service to our Nation, President Bush remained humble. He never believed that government — even when under his own leadership — could be the source of our Nation’s strength or its greatness. America, he rightly told us, is illuminated by “a thousand points of light,” “ethnic, religious, social, business, labor union, neighborhood, regional and other organizations, all of them varied, voluntary and unique” in which Americans serve Americans to build and maintain the greatest Nation on the face of the Earth. President Bush recognized that these communities of people are the true source of America’s strength and vitality.

It is with great sadness that we mark the passing of one of America’s greatest points of light, the death of President George H.W. Bush.

NOW, THEREFORE, I, DONALD J. TRUMP, President of the United States of America, by the authority vested in me by the Constitution and the laws of the United States, in honor and tribute to the memory of President George H.W. Bush, and as an expression of public sorrow, do hereby direct that the flag of the United States be displayed at half-staff at the White House and on all public buildings and grounds, at all military posts and naval stations, and on all naval vessels of the Federal Government in the District of Columbia and throughout the United States and its Territories and possessions for a period of 30 days from the day of his death. I also direct that, for the same length of time, the representatives of the United States in foreign countries shall make similar arrangements for the display of the flag at half staff over their embassies, legations, consular offices, and other facilities abroad, including all military facilities and naval vessels and stations.

I hereby order that suitable honors be rendered by units of the Armed Forces under orders of the Secretary of Defense.

I do further appoint December 5, 2018, as a National Day of Mourning throughout the United States. I call on the American people to assemble on that day in their respective places of worship, there to pay homage to the memory of President George H.W. Bush. I invite the people of the world who share our grief to join us in this solemn observance.

IN WITNESS WHEREOF, I have hereunto set my hand this first day of December, in the year of our Lord two thousand eighteen, and of the Independence of the United States of America the two hundred and forty-third.