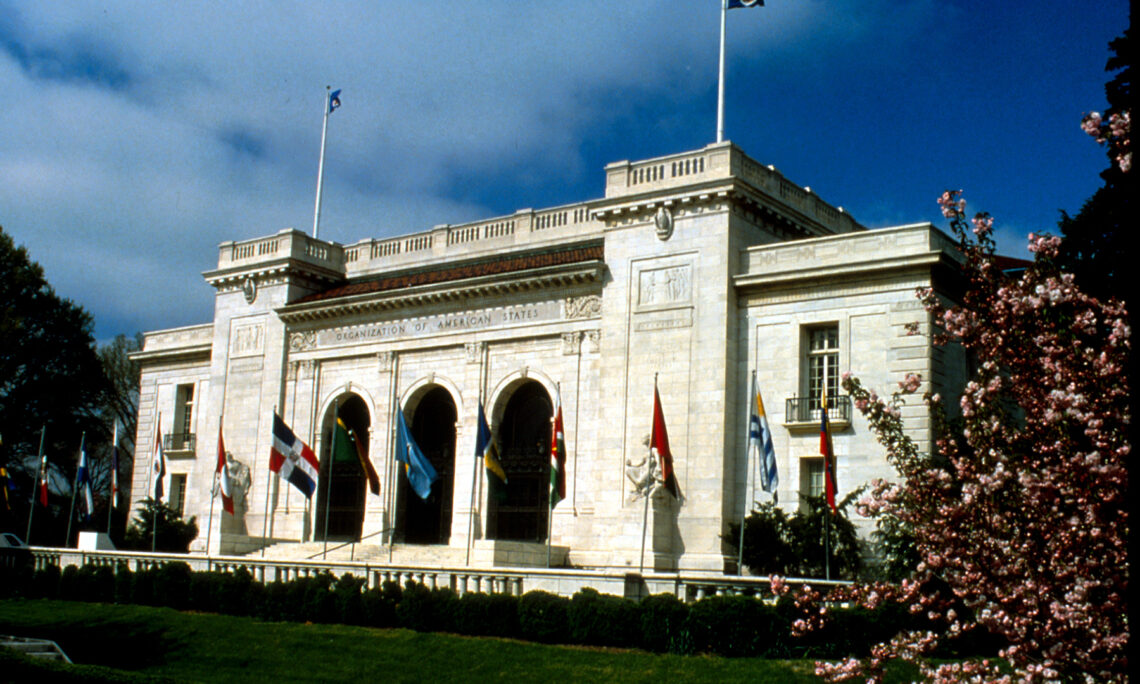 The Organization of American States

Thank you, Mr. Vice Chair for the opportunity to provide closing remarks on behalf of the United States, which was pleased to support the holding and organization of today’s timely special session. I want to thank all of the speakers for their remarks, and to the Secretariat for its ongoing support of our work in this committee.

Since the adoption of the Universal Declaration of Human Rights in 1948, Mr. Vice Chair  and distinguished colleagues, there has been widespread consensus that “recognition of the inherent dignity and of the equal and inalienable rights of all members of the human family is the foundation of freedom, justice and peace in the world.”

This has been reinforced in our region by the American Declaration on the Rights and Duties of Man, the American Convention, the OAS Charter and the Inter American Democratic Charter.

These obligations and commitments serve to also underpin the United Nations Sustainable Development Goals (SDGs), including SDG 16 on peaceful and inclusive societies and SDG 4 on inclusive and equitable quality education, target 4.7 of which prioritizes education for sustainable development, human rights and peace.

It’s worth emphasizing that these international conventions, declarations, charters and agendas have been strongly embraced by many OAS states.  The Inter-American Democratic Charter in particular articulates the mutually reinforcing relationship between the enjoyment of human rights and strengthened, participatory democracies.

And yet, as we have heard many times during this 5th Inter-American Week for Indigenous Peoples, multiple forms of discrimination persist throughout our region, including in my own country — which can include racial and ethnic discrimination, often leading to conflict and violence. There is also an increasing level of gender discrimination in the region, with alarming rates of femicide.

These are just a few examples of a broader trend towards polarization on social and political issues in the Americas, which has been reaffirmed by today’s speakers.

This leads us to several pressing questions, which must inform this committee’s preparatory work for the upcoming OAS General Assembly in Lima – in essence, how can we seek social justice and peace amidst shrinking civic space, corruption, the challenges of COVID-19 both as it pertains to public health but also the threats the pandemic has posed to people’s exercise of their human rights, and the fundamental need to promote and protect human rights?

Mr. Vice Chairman, allow me to provide some concluding observations by stressing that in the United States, the First Amendment of our Constitution protects the right to peaceful assembly and state constitutions do the same.

The United States firmly believes that a robust civil society – independent of state control or government involvement- is necessary for democracy to thrive. From the earliest days of U.S. history, civil society organizations have played a key role in protecting human rights and advancing human progress.

Secretary Blinken himself has said that “democracy is a system where we all have a role to play in defending it.”  Civil society, in particular, is a source of all-encompassing ideas, promoting everything from transparency and free expression, reversing inequality, and rescuing our environment.  We remain resolute in our commitment to the idea that the public interest is served best when private citizens and members of civil society can choose freely the aims, organizations, and causes they support.

Likewise, we understand that collaboration between government and civil society can in fact improve how services are provided or the impact of a government action on a community.

Public participation in civil society organizations is highly valued, whether the groups provide services for low-income people, caring for and helping to educate our children, advocate for the environment, or support candidates for political office.  Even people who are not focused on political expression or even voting take part in their local church’s soup kitchen or volunteer with an organization that tutors children.

So, despite the deep political divisions and serious social challenges facing my own country, across diverse communities, the law and the cultural norm remains that the PEOPLE have the freedom to  to organize, function, and gather peacefully without undue government interference.

Mr. Vice Chair, we also acknowledge that many civic actors, including human rights defenders, and governments  are watching the ongoing dialogues and debates in the United States, and we believe deeply that these processes reflect the reality that, the work of democracy is never done –  as President Biden has said “democracy does not happen by accident, we have to defend it, fight for it, renew it… “…as a global community for democracy, we have to stand up for the values that unite us….”

The answer to the division and polarization that we see today must therefore lie within us all.  As governments, we must respect people’s human rights and fundamental freedoms, we must provide civil society with space to do its work, we must listen to all voices with intention and intrigue, and most importantly, we must protect our most vulnerable.

In the face of sustained and alarming challenges to democracy and universal human rights all around the world, democracy needs champions. While citizens in many of the member states represented here today join organizations for the improvement of their communities, or to advocate for issues that impact us all, it remains clear that Freedoms of Association and Peaceful Assembly are under assault in across our region. Therefore, as President Biden has said, in the face of these threats “democracy needs champions” and civic actors, including human rights defenders, work everyday to champion these ideas.

Bearing in mind the outcomes of the recent Ninth Summit of the Americas in Los Angeles, the Biden Administration and its partners are responding to threats to these fundamental freedoms by fortifying democratic institutions, investing in civil society, strengthening independent media, and following through on regional digital transformation that is transparent and equitable.

At the inaugural Summit for Democracy, President Biden announced its commitments under the Presidential Initiative for Democratic Renewal, a landmark set of policy and foreign assistance initiatives that build upon the U.S. government’s significant, ongoing work to bolster democracy and defend human rights globally.  Within the initiative, the Department of State and USAID dedicated over $477 million to support democracy, human rights, fighting corruption, and the rule of law in the Western Hemisphere.

Working with Congress, the Administration will also invest approximately $75 million over three years across 300 locally based, community-led organizations via the U.S. Government’s Inter-American Foundation to empower local civil society organizations, including human rights defenders, underrepresented and underserved populations.  Additional support will strengthen the Citizen Forum of the Americas to build civil society’s capacity to engage with governments and monitor implementation of Summit commitments, and expand the Citizen Corruption Observatory, which provides technical assistance for civil society’s anti-corruption efforts.

USAID will launch the interagency Voices (Voces) Initiative, devoting $42 million to protect, defend, and promote civic space in Central America. These programs will focus on Promoting Digital Democracy and Countering Digital Authoritarianism; Promoting Freedom of Expression and Strengthening Independent Media; and Countering Criminalization and Providing Protection. The United States will work alongside like-minded partners—governments in the region and beyond, the international community, civil society, including human rights defenders, the private sector, and others—to advocate for protection of internationally recognized human rights.

In parallel, we will provide seed funding and will endorse the OAS and U.S.-based non-government partners to launch the Center for Media and Information Integrity program. The United States will also expand its Digital Communications Network, a cross-section of digital leaders, developers, influencers, educators, and specialists to bridge the divide between digital, traditional media, and new media, to the Americas to enable local partners to better address disinformation.

In the International Community, we continue our efforts to join allies in bolstering democratic resilience and multilateralizing our approach to emerging threats.

In summary, Mr. Vice Chairman — we must embrace the lessons learned and best practices identified during today’s panels, so that we may strengthen regional and OAS responses in support of human rights such as fundamental freedoms of peaceful assembly and association. This is the task ahead of us, as we look to the OAS General Assembly in Lima. I am also pleased to take note of the special session of the Permanent Council to be held tomorrow, Friday afternoon, regarding the situation in Nicaragua.

Situations such as that in Nicaragua help to underscore the need for OAS Member States to work together to promote and protect shared and universal rights.  We must find inclusive ways to cooperate more effectively, and we must also be willing to speak up when we see those rights being attacked anywhere in the hemisphere.

Let me close with a timely quote from the much beloved historian David McCullough who passed away this week at age 89:

“In our foreign policy as in our own national life we need less fanfare, less stagecraft and circumventing. We need to talk sense, to speak the truth, to work harder and stay faithful to our fundamental beliefs. We are, each of us, responsible for our own actions, but we also know it has been bedrock in our American creed, that without cooperation, without all of us working together, pulling together, we can’t make it.” Thank you all very much.