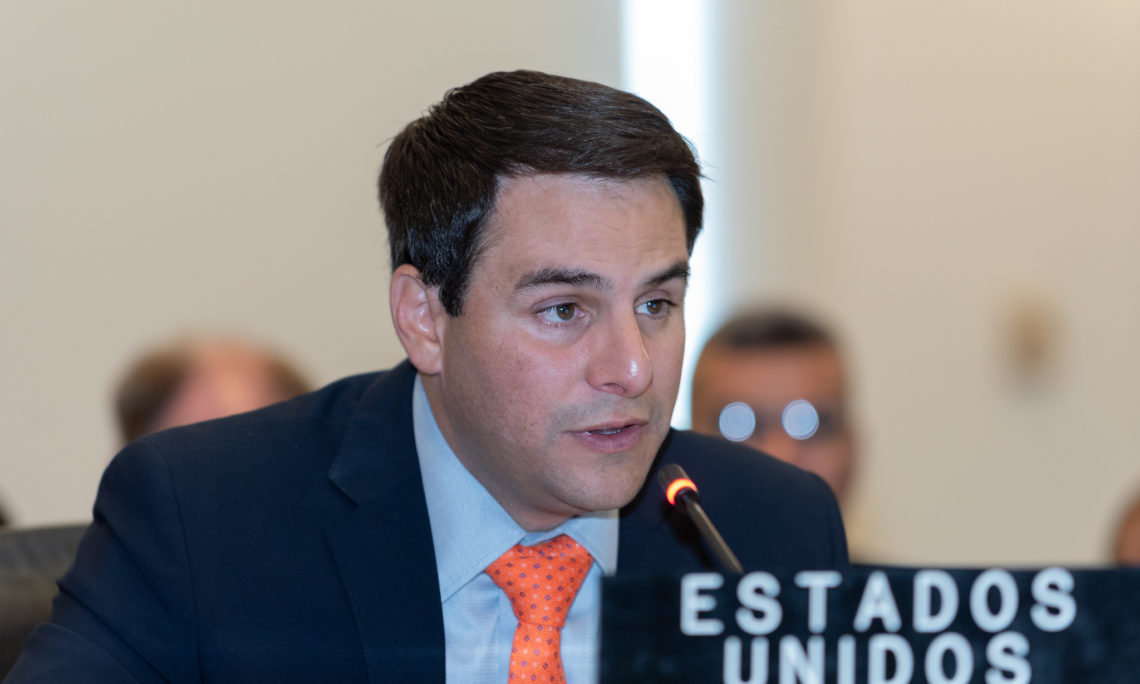 The States Parties to the Inter-American Treaty of Reciprocal Assistance (TIAR) approved a resolution to establish the Organ of Consultation of the Treaty and convene a Meeting of Ministers of Foreign Affairs. Ambassador Trujillo addresses the Permanent Council, September 11, 2019. (OAS Photo)

Thank you Chair, and we are very pleased that the OAS is discussing this historic opportunity to work with our regional partners to insist on the peaceful restoration of democracy in Venezuela.

Colleagues, today is September 11, the anniversary of the terrorist attack that prompted the last invocation of the TIAR or Rio treaty. The Rio treaty was born after the cold war, but it is an instrument to unite the region to face all types of threats, from conventional war, to terrorist attacks, and now to new threats to the stability of the region.

Colleagues, there can be no serious question that the actions of the former Maduro regime have disturbed the stability of the region. We have discussed this for years, and we have passed numerous resolutions condemning human rights violations, the failed economic and political policies, and the destruction of Venezuela’s democracy. We have proposed dialogue, and looked for so many ways to peacefully resolve the crisis. In return, we have gotten nothing. At times, the Maduro regime agrees to dialogue to play for time when they are under pressure, but they have never altered their destructive course.

The results of the Maduro regime’s disastrous political and economic policies are now plain for everyone with eyes to see. The formerly rich country has fallen into an unprecedented state of chaos where the Venezuelan people do not have food to eat, nor do they have medicine to treat the basic illnesses. The situation is so terrible that over 4 million people, well over 10% of the total population, has fled Venezuela and sought help from neighboring countries. The number will keep growing, as the Maduro team could care less about how their policies hurt the common people, as long as they can enrich themselves. Infectious diseases, and rare like measles and malaria, once under control, are now spreading to neighboring countries since the former Maduro regime cannot be bothered to provide vaccines to their own people.

The humanitarian crisis is not the only threat to regional stability. The mismanagement and decline of the former Venezuelan government has allowed the rise of narco-traffickers, trafficking of arms and people, and irregular armed groups that further threaten the peace of the American region. Indeed, in many cases, these traffickers in narcotics, arms and people, as well as other armed groups, benefit from the covert assistance of the former Maduro regime. The United States has sanctioned many top Maduro officials for their roles in arms trafficking and systemic corruption.

Colleagues, this is why the United States strongly supports the convoking an Organ of Consultation under the Rio Treaty to frame a regional response to these threats which endanger the peace and stability of the Americas. This is an historic day when the region joins together to finally seek stability and democracy in Venezuela, and a country in harmony with its neighbors.

The Rio treaty provides many options to achieve our collective goal, which is the peaceful restoration of democracy in Venezuela. We look forward to discussing these options with the other Signatory states, and designing a strong and comprehensive strategy to peacefully restore democracy in Venezuela. We are stronger together, and working together we can and will achieve our goals.