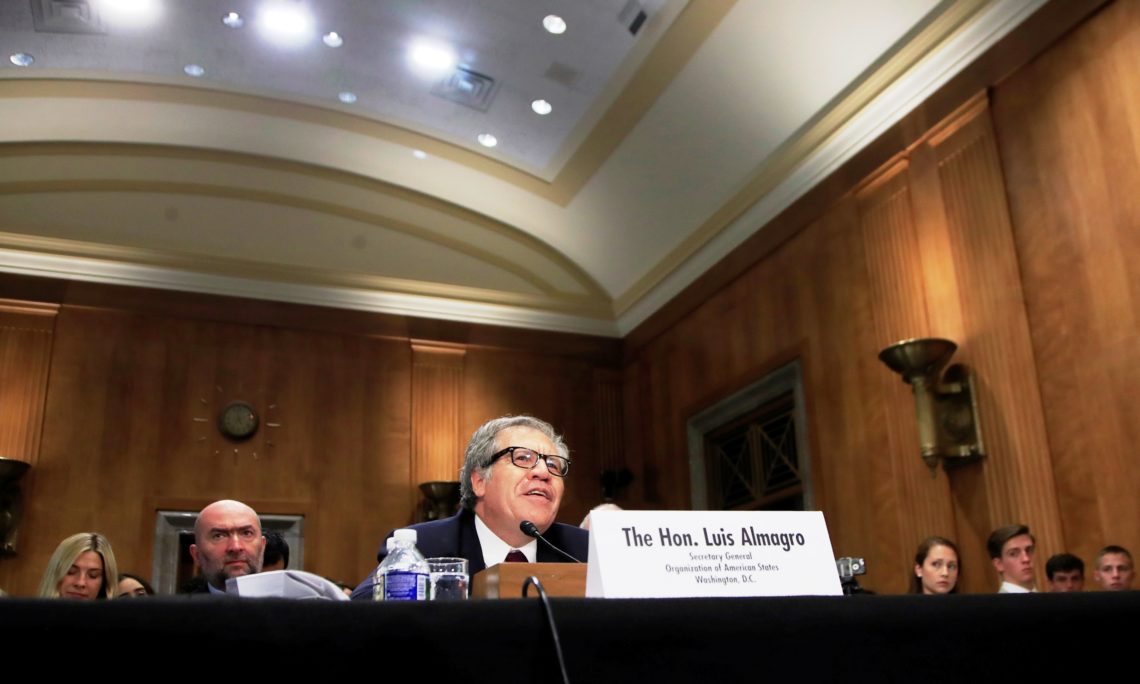 Testimony of #OAS Secretary General @Almagro_OEA2015 at US Senate hearing on #Venezuela pic.twitter.com/Cr5EVCKLkD

Thank you for this opportunity to be with you today as we address the ongoing crisis in Venezuela.

The OAS – the Organization of American States – is the only multilateral forum that has taken action against the dictatorship in Venezuela.

On April 3, 2017, the Permanent Council passed Resolution 1078/17 declaring an “alteration of the constitutional order” in Venezuela.

The Supreme Court decision to suspend the powers of the National Assembly as inconsistent with democratic practices, and constitutes an alteration of the constitutional order in Venezuela.

We urged the Venezuelan government to ensure the full restoration of the democratic order.

We requested that the Venezuelan government safeguard the separation and independence of powers.

We said that we stand ready to support measures to return to democratic order and to take diplomatic initiatives to foster the restoration of the democratic institutional system, in accordance with the OAS founding Charter and the Inter-American Democratic Charter.

The international community has a vital responsibility when faced with tyranny and repression.

Venezuela is going through a decisive moment. In play is the sovereignty of the people and the survival of the Constitution, the last link of the country with the rule of law. In 100 days of citizen protests, nearly 100 people have been killed, the majority of them young people, many of them minors. The number of political prisoners has risen to 433 and 415 civilians have been brought before military courts. The systematic violation of human rights and basic freedoms is the worst attack against the Constitution.

The regime proposes more abuse, more repression, increasingly less freedom and the tool it proposes to institutionalize this is a Constituent Assembly. A Constituent Assembly imposed by decree, without the people and against the people, setting the will of the dictatorship above the popular will expressed through a universal and direct vote.

I echo the words of the Venezuelan Episcopal Conference.

“The mentioned constituent project seeks to impose a dictatorial regime on the country. In addition, by privileging, in its composition, sectoral voting bases with no legal support, it violates the right of all to elect and be elected and the constitutional principle (Art. 63 CRBV) of the proportional representation of the population according to territorial distribution.”

And it underlines that: “The National Constituent Assembly would have supra-constitutional power, with the aim of eliminating the current state bodies, mainly the National Assembly, legitimately elected by the people.”
It is the right and the responsibility of all citizens to participate in decisions relating to their own development. This is also a necessary condition for the full and effective exercise of democracy. Promoting and developing diverse forms of participation strengthens democracy.

We are in a time in which mediation efforts are taking place, all of them of course welcome because they demonstrate the commitment of the international community to the search for a solution to the crisis. In this context, the institution that is in the best condition to act is the
Episcopal Conference because it is Venezuelan as we have said, because it knows people’s feelings, because it knows better than anyone the history of this process and because of its immense moral authority.

From the international community we have stripped the regime of its impunity. The alteration of the Constitutional order has be recognized and denounced, the return of democracy to the country has been called for, sanctions have been applied to corrupt and criminal affiliates of the regime, the freeing of political prisoners has been requested, and various mediation forums have and will be offered.

The work of the OAS has been and is essential in this sense, but the solution to the crisis is Venezuelan.

Over the last month, the regime in Venezuela has buried democracy, the separation of powers, justice, civil guarantees, political, economic and social rights, as well as the principles that constitute a legitimate government. All the members of the current illegitimate government are responsible and the role of the President of the National Electoral Council Tibisay Lucena has been crucial in the institutional collapse. An independent, impartial and healthy electoral body with adequate technical capabilities is fundamental to guarantee the political rights of the citizens. Its responsibility is nothing less than the protection of the strict respect for the right to political expression of the people, the only sovereign that is legitimate to carry on the country.

In this way it definitely puts an end of the right of the Venezuelan people to democracy.

People like Tibisay Lucena, that continue stripping democracy of its content, work to serve the consolidation of the interests of the dictatorship imposed through the suffering of its people, sustained by the killing of its people, by the political imprisonment of opposition leaders and by torture.

The Venezuelan judiciary also has violated the fundamental principles by which the people are ensured justice, its independence. It has become an essential part of the organizational chart of institutional corruption. If justice does not follow the principles and values of democracy and the rule of law, this accelerates the illegitimate functioning of the state.

The Bolivarian National Guard and its head are directly responsible for the repression that has murdered, imprisoned, and tortured people. The brutal repression shows the National Guard as the perpetrator of the violation of right to life, freedoms and guarantees of due process. Behind every detainee, every political prisoner, behind every person tortured and killed there is someone institutionally responsible in Venezuela.

The Minister of Internal Relations, Nestor Reverol, Benavides Torres, General Zavarse lead the two institutions charged with the use of force in Venezuela. In this sense they are responsible for every aggression, every shot and every death.

The return of democracy to Venezuela and the restoration of the rule of law is urgent. Legitimacy will only be returned to its institutions when those in power assume their functions according to the Constitution and the popular mandate. The Minister of Defense General Vladimir Padrino Lopez has separated the armed forces from their fundamental commitments to respect the Constitution, the laws, and the institution itself.

I am often asked about sanctions. And let me be clear, the sanctions will not worsen the suffering of the Venezuelan people.

A clear message must be sent to Maduro and his colleagues that the criminals whose corruption, who’s strategy, and whose orders have created this crisis and killed countless of their citizens, should be targeted and held to account.

We support sanctions on individuals who have committed crimes and are accused of corruption and we need more economic pressure on a government that is investing the money it earns through natural resources that belong to the people to fight and kill that very same people.

Torture is a crime against humanity. We intend to support investigations and we ask everybody to do so that may help to identify the practices of torture in Venezuela and those responsible for them, especially in front of the International Criminal Court.

All our actions should be oriented to resolve this agenda. The agenda is free, transparent, just general elections. The freeing of political prisoners, restoration of the powers of the National Assembly and an emergency plan to resolve the humanitarian crisis in the country.