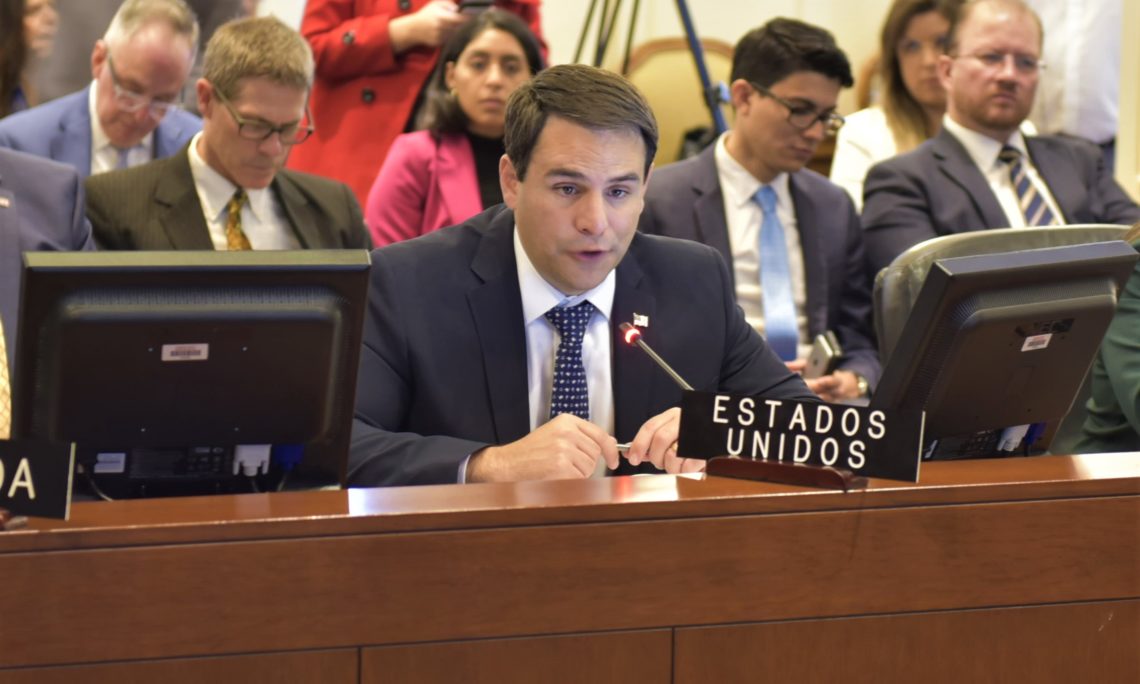 Ambassador Carlos Trujillo addresses the special session of the OAS Permanent Council on the situation in Bolivia, October 23, 2019. (OAS Photo)

Madam Chair, thank you for convening this morning’s Special Session of the Permanent Council.

We also appreciate the timely presentation on behalf of the OAS Secretariat, which provided us with important updates regarding electoral and political developments in Bolivia.

The United States strongly supports respecting the will of the Bolivian people, as expressed through democratic elections. The people of Bolivia have spoken in this election, even as the Government of Bolivia used many means to try to tilt the election in their favor.

Let me therefore begin by reaffirming that the United States is closely monitoring developments in Bolivia. This includes the sudden interruption of the electronic vote tabulation.

We believe strongly that electoral authorities should immediately restore credibility and transparency to the process, and in doing so, show respect for the will of the Bolivian people.

The United States strongly supports the OAS Bolivian electoral observation mission (EOM). The OAS has successfully and credibly monitored many elections throughout the hemisphere. Indeed, the OAS has provided electoral monitoring in numerous elections in Bolivia, and its expertise and impartiality are internationally recognized.

Why did the Government shut down the reporting of results? Because it became clear that they would not win in the first round and that the voters would force President Morales into a second round. The Government allowed a somewhat fair election because they did not realize their unpopularity and thought that they could win under this system.

The Government claims that they shut down the election reporting because of some computer issue. This is nonsense.

Why did the same computer software work perfectly for other elections in Bolivia and fail this time? Why did the system for reporting election results work perfectly for 84% of the results, only for the authorities to shut down reporting, without explanation, for 24 hours? There is only one reason, the government needed time to fix the election.

It is clear from the results that we have- from before the 24 hours the Government used to cook the results- that President Morales was leading, but under Bolivian law there should be a second round of voting.

The preliminary results, with 84% of the voting, showed President Morales up by 7%. The OAS quick count, covering all the votes, showed him up by 5%. The official quick count showed him up by 4%. Each of these counts, showing votes counted under normal circumstances, showed President Morales ahead by 4-7%, well below the 10% required to avoid a second round.

The United States has consistently maintained it is essential to respect democratic values and rule of law throughout our hemisphere — including through free, fair, credible, and transparent elections that reflect the will of the Bolivian people and that respect the Bolivian constitution, as well as Bolivia’s international obligations and commitments.

With these points in mind, the United States soundly rejects the Electoral Tribunal’s ongoing attempts to subvert Bolivian democracy — by delaying the vote count and taking actions that undermine the credibility of Bolivia’s elections.

And so, Madam Chair, we call again on the TSE to immediately act to restore credibility in the vote counting process. The Government has burned the ballots in several locations, so it is impossible to have a re-count.

At this point, the only credible path is to follow the will of the Bolivian people, as expressed in the legitimate vote counts, and order a second round of the election.

If President Morales is as popular as he claims, he will win in the second round.

We call upon continued vigilance by the OAS and the international community to safeguard the right of the Bolivian people to vote democratically. Now that President Morales and his party know their own unpopularity, they will cheat to win.

My delegation would like to underscore this point, since a key mission of the OAS is to foster free, stable and responsive democratic institutions throughout the Americas.

The observations and recommendations of the OAS electoral monitoring mission to Bolivia therefore serve as a guide for our supportive efforts. As the OAS mission put it quite aptly, “We hope that the result of the final calculation will adhere to the will of the voters expressed at the polls.”

In closing, let me reaffirm that the United States looks forward to working to recognize and support the popular will of the Bolivian people — to advance respect for democracy, prosperity, and security. Thank you.