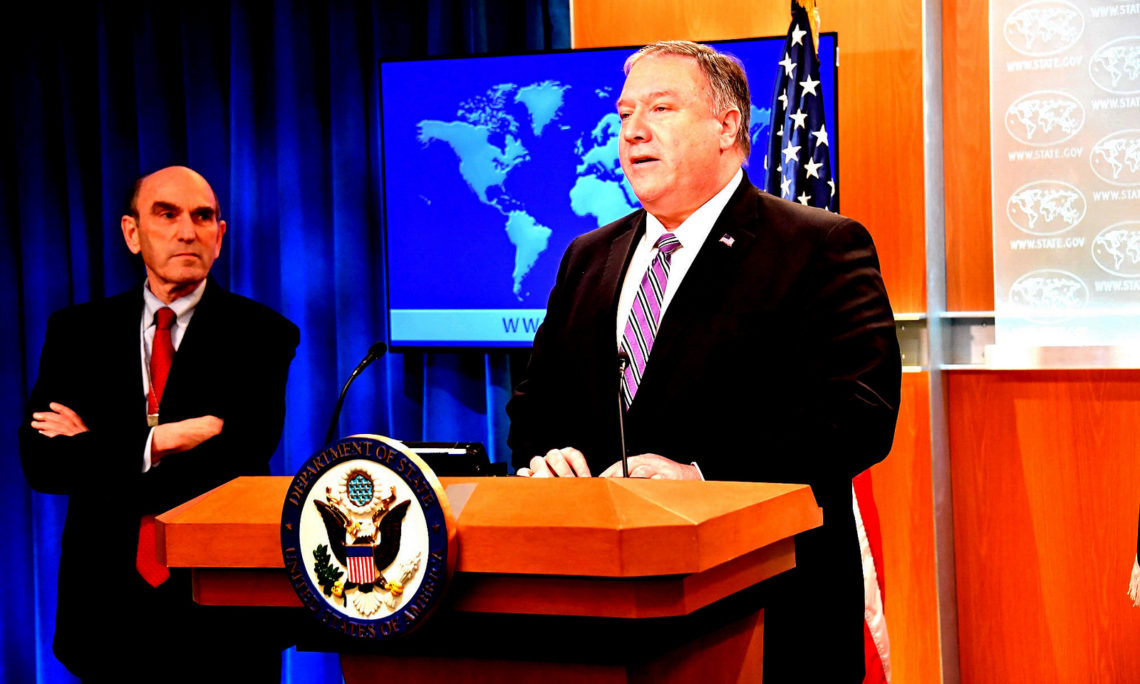 SECRETARY POMPEO: Good afternoon, everyone.Today I am incredibly excited to announce that a seasoned, principled, and tough-minded foreign policy veteran is joining our State Department team.

Elliott Abrams is coming aboard to lead our efforts on Venezuela.

His critical work will get started right away. Tomorrow, he will travel with me to the UN Security Council, where the United States has called a long overdue meeting to urge other nations to support Venezuela’s democratic transition.

Elliott’s passion for the rights and liberties of all peoples makes him a perfect fit and a valuable and timely addition. This week, the Venezuelan people have rejected former President Maduro’s illegitimate rule. Consistent with Venezuela’s constitution, and with the support of the Venezuelan people and the National Assembly, Juan Guaido has declared himself the interim president of Venezuela.

These are just the first steps on Venezuela’s road to liberty. Elliott will be a true asset to our mission to help the Venezuelan people fully restore democracy and prosperity to their country.

On this issue and all others, he is eager to advance President Trump’s agenda and promote the ideals and interests of the American people.

And now Elliott would like to say a few words.

MR ABRAMS: Thank you. Very briefly, I left this building 30 years ago this week, last time I worked here. So it’s very nice to be back. This crisis in Venezuela is deep and difficult and dangerous, and I can’t wait to get to work on it. Thank you.

SECRETARY POMPEO: Well, as to your first question, Elliott will have responsibility for all things related to our efforts to restore democracy in Venezuela. It’s a global challenge. There are multiple dimensions to how we hope to assist the Venezuelans in achieving democracy there, and he will be responsible for leading that effort.

We have an enormous team here that’s done truly remarkable work to date to get us to the point we are at today, and they’ve done this over certainly my eight months, but long preceding that as well. I’m incredibly proud of the work that our State Department team has done to date. Elliott will now lead our effort that relates directly to our efforts on behalf of the Venezuelan people.

I would expect, though, that his first task will be to get up to speed and then travel with me to New York tomorrow morning for the UN Security Council meeting. And after that, I couldn’t tell you where it will take him. Wouldn’t surprise me if he ends up traveling to the region, but what – the road ahead will be driven by the demands of the Venezuelan people and how we can assist them in achieving the outcome that America wants them to achieve.

QUESTION: And on the overseas assets?

SECRETARY POMPEO: On the overseas assets, we’ll have announcements from other places later today talking about how it is that we anticipate the interim President Juan Guaido will have the resources he needs to lead the Government of Venezuela forward.

QUESTION: NTN 24, Gustau Alegret. Among the countries that has not recognized Juan Guaido as president are Mexico and Uruguay, and both countries has offered their diplomacies in order to help in the crisis. Is the U.S. thinking to work with them, or is the U.S. asking them to recognize Guaido? What’s the position of the State Department with these two countries?

So whether it is Mexico or Uruguay or any other country, we hope to work with them to achieve the sense that we can ultimately have a free and fair election in Venezuela, where the voices of the Venezuelan people who, under the Maduro regime, have been starved. Enormous medical and humanitarian situation in Colombia, more than a million refugees have fled the horrors of the Maduro regime. We’ll work with all nations to try and achieve that outcome. We think every country ought to take steps towards achieving that, and not side with this cruel dictator in Venezuela who has caused so much devastation for the people of Venezuela.

MR PALLADINO: Wrap it up, sir?

SECRETARY POMPEO: I think one more.

QUESTION: Mr. Secretary, I think a lot of people are concerned about the diplomats who are down there. Would you tell us what you’re prepared to do if tomorrow, when the 72-hour deadline passes, they – the Venezuelans cut off electricity and water, maybe even surround the building, or even try to go in to bring out the diplomats by force? Could you be specific about what you are prepared to do in the event of any of these scenarios? And how can you assure people that they are protected?

SECRETARY POMPEO: I appreciate that question. There’s been no activity that’s taken more of our time over the past days than ensuring the protection of all those folks that are under our chief of mission authority there in Venezuela. We’re working diligently to make sure that they are protected. There’s no higher priority for the Secretary of State, and you should know no higher priority for the President of the United States. We have discussed this at some length.

With respect to the way we will deliver that, we’ve made clear to everyone that it is our expectation that the U.S. officials that are there, that have now been invited to be there by interim President Juan Guaido have a right, they have the privileges and immunities that accrue to having been invited to be there by the duly credentialed leader of Venezuela, and we have every expectation that those rights will continue to be protected.

You would have seen today that we have ordered a – have an ordered departure. We’re beginning to move some of our staff out. This is consistent with what the State Department does every day. The first briefing I get every morning is all around the world, every mission, every consulate, every facility where we have officers, I receive a briefing on risk and risk analysis. We’ll continue to do that in Venezuela. It is literally a 24/7, moment-by-moment exercise to evaluate risk to the people who work for me in the State Department, and we’ll get this right. We will make sure that we protect our folks on the ground and take all appropriate measures to ensure that they’re protected.

QUESTION: And if they’re not?

SECRETARY POMPEO: Thank you all.

MR PALLADINO: Thank you very much.

QUESTION: Has the meeting tomorrow been scheduled at the Security Council?