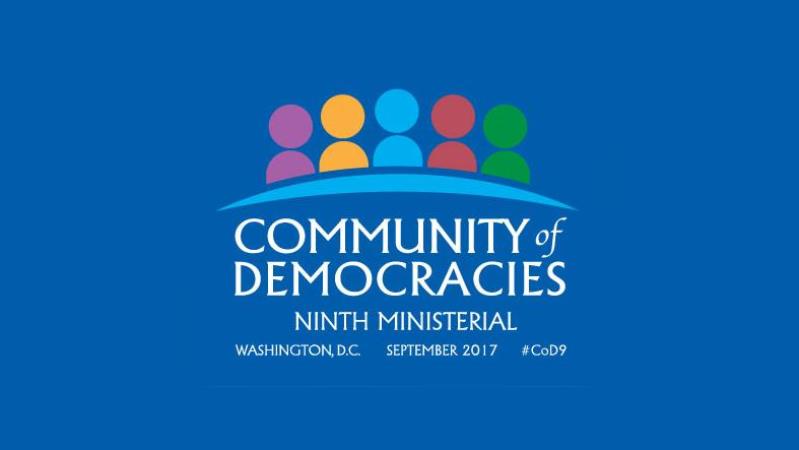 On September 15th, the International Day of Democracy, Secretary of State Rex Tillerson will host the Community of Democracies (CoD) Governing Council Ministerial meeting in Washington D.C. The Secretary has invited the foreign ministers of the 30 Governing Council member countries. Representatives of other CoD members, youth, and members of civil society and the private sector will also join the full-day event at the State Department. As the host, we are pleased to highlight our goals for this important meeting.

The United States and Poland founded the Community of Democracies in June 2000 as a vehicle to sustain and strengthen democratic values. At the first meeting, members produced the Warsaw Declaration, which articulates a shared commitment to the promotion and protection of democratic values and emphasizes the interconnectedness of peace, development, human rights, and democracy. Today, the CoD continues to bring together governments, civil society, and others working to advance democracy globally.

This year’s Ministerial is the culmination of the U.S. Presidency of the CoD.  During our presidency, we have urged governments to work together on protecting and promoting the role of civil society in the democratic process. We have also highlighted the vital role democracy plays in fostering long term security, including in addressing terrorism, and economic development.

The United States believes that governments with strong democratic institutions that respect the fundamental rights of their citizens are more stable and secure. Democracy allows a country to unleash the full potential of its citizens and benefit from the unrestricted exchange of ideas and beliefs.

“Our mission is at all times guided by our longstanding values of freedom, democracy, individual liberty, and human dignity…. As a nation, we hold high the aspiration that all will one day experience the freedoms we have known.”

In hosting this Ministerial, we affirm that standing up for human rights and democracy is a moral imperative and is both in the best traditions of our country and vital to our national interests. We will continue to work with members of civil society and our partners worldwide to strengthen democratic governance, promote the rule of law, and defend individual liberty for all.