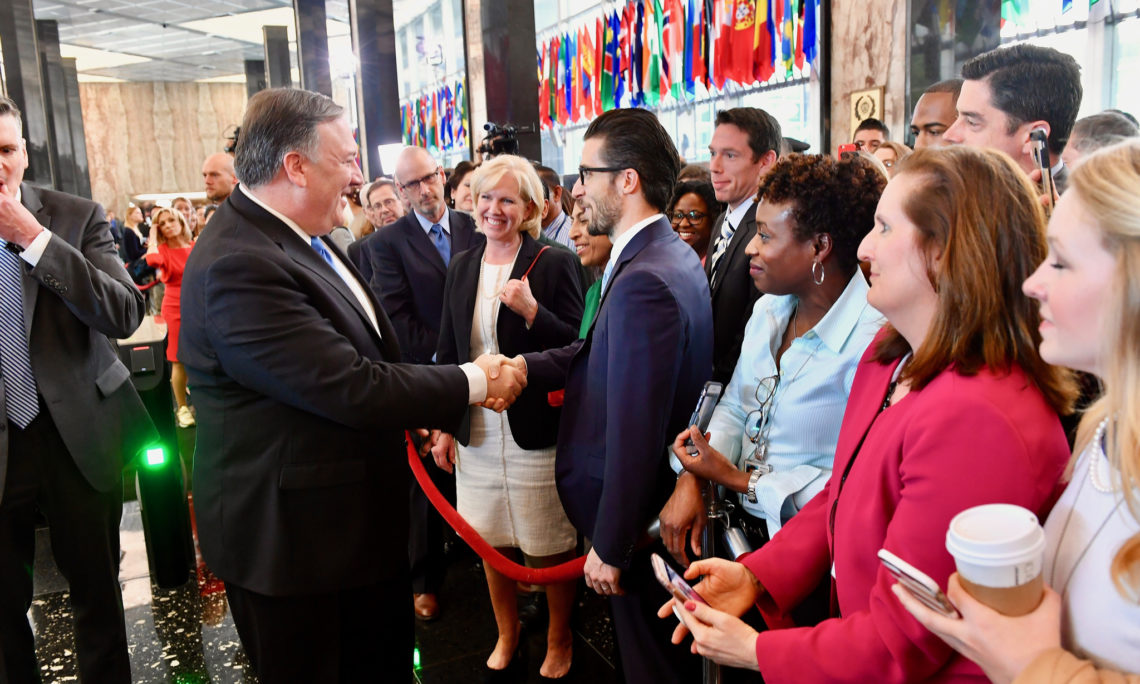 DEPUTY SECRETARY SULLIVAN: Thank you. Thank you, everyone, for being here. It’s a great honor to be here to introduce our new Secretary of State. Before I do so, I wanted to thank all of you, each and every one of you, for your hard work over the last six weeks. The pace of world events doesn’t pause to allow the United States Government to change from one secretary of state to another, but it’s because of your dedication and professionalism that this department has continued to meet its mission for the American people. So thank you to all of you for all you’ve done the last six weeks. (Applause.)And now it’s my great honor to introduce our new Secretary. You all know his bio; he’s a former three-term member of Congress, former-now director of the Central Intelligence Agency. I offer my own perspective as somebody who comes from the private practice of law; in looking at his bio, I looked at it through the lens of a former law firm partner, and I imagined how I would assess his bio if I were looking at our opposing counsel, and I had to advise my client on who we were going to be dealing with. And what stood out to me was we have a tank commander who then went to Harvard Law School and was elected to the Harvard Law Review, which is a pretty unusual combination. So if I were advising my client about who we were going to be dealing with on the other side of the table if we’re in negotiation, or if it were in a court room, I’d say, “Wow. Well, ma’am, we’re dealing with a cross between George Patton and Oliver Wendell Holmes.” (Laughter.)

So that’s a pretty tough combination to face as an opponent, but the good news for us is he’s coming here to lead our team. It’s the adversaries of the United States who are going to be facing that formidable opponent across the table.

So without further ado, I’ll turn over the microphone to the 70th Secretary of State, Mike Pompeo. (Applause and cheers.)

So I think I have the record for the longest trip to the first day of work. (Laughter.) And I am humbled to be here. I tried to prepare myself for this moment, but to stand here and look at the most important diplomatic corps in the world is enormously humbling to me. I talked in my hearing about the fact that this nation is so exceptional and so incredibly blessed. And the facts that derive from that are that it also creates a responsibility, a duty for America all across the world. And I know for certain that America can’t execute that duty, can’t achieve its objectives absent you all, absent executing America’s foreign policy in every corner of the world with incredible vigor and incredible energy. And I am looking forward to helping you all achieve that. (Applause.)

I then will, sometime either later this week or beginning of next, do more to develop my commander’s intent, what it is I hope to achieve with your help. I’ll speak to the entire work force, I’ll lay out for you my expectations and my hopes, and most importantly, share with you my leadership style. And this is very different. Like, one of the first rules is don’t talk down to people, right? (Laughter.) So I’ll speak to you all right up here, exactly.

But alongside that is that I feel like I know you. I’ve worked alongside you as a member of Congress when I traveled. I’ve had the chance to watch when I was traveling around the world and I would go into an embassy and I’d arrive late at night and there were the folks in the political section or the economic section toiling, doing great work on behalf of America.

So I have a great deal to learn about the State Department and how we perform our mission, but as people, I’m confident that I know who you are. I know that you came here. You chose to be a Foreign Service officer or a civil servant or to come work here in many other capacities and to do so because you’re patriots and great Americans and because you want to be an important part of America’s face to the world. My mission will be to lead you and allow you to do that, the very thing you came here to do. (Applause.)

I will get to as many parts of this organization as I can. I said in my testimony that I’ll spend as little time on the seventh floor – I think it’s the seventh floor, right? Yeah. (Laughter.) I’ll go up there in a minute. I’ll be – I’ll travel. I’m going to get out to USAID as quickly as I can to see their important part of our mission as well. I know that every task, every endeavor that each of you undertakes is a critical part of achieving that ultimate objective, which is to deliver President Trump and America’s foreign policy around the world, to be the diplomatic face that achieves the outcomes that America so desperately needs to achieve in the world.

I’ve told this story a couple of times, but it’s worth repeating: The best lesson I ever got was from a fellow named Sgt. 1st Class Petry. He was the first platoon sergeant in my first tank platoon when I was 22 or 23 years old. And I arrived there and he, when I hopped out of the jeep, he said, “Lieutenant, you’ll do well to just shut up for a while.” (Laughter.) And he – and actually, I think he meant that, but – (laughter) – but what I took him to be saying was that it’s important that we listen and learn, and I know that I have an enormous amount to listen to you about and to learn from you. I talked about getting back our swagger, and I’ll fill in what I mean by that, but it’s important. The United States diplomatic corps needs to be in every corner, every stretch of the world, executing missions on behalf of this country, and it is my humble, noble undertaking to help you achieve that.