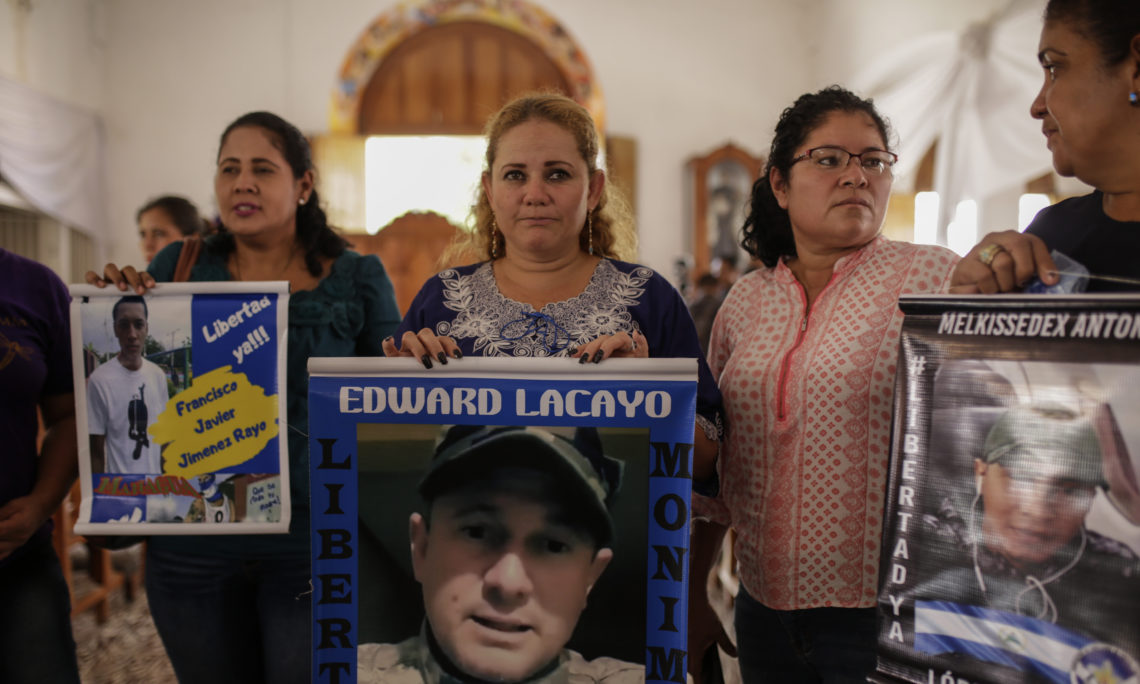 Mothers and relatives of jailed anti-government demonstrators holds signs with images of their imprisoned sons and family, at the San Miguel Arcangel Church in Masaya, Nicaragua, Thursday, Nov. 14, 2019. The group started a hunger strike to demand their freedom. (AP Photo/Alfredo Zuniga)

Report of the OAS High-Level Commission on Nicaragua

In keeping with Resolution AG/RES.2943 (XLIX-O/19), adopted on June 28, 2019 at the Fourth Plenary Session of the forty-ninth regular session of the General Assembly of the Organization of American States (OAS), which stated that human rights violations that have taken place in Nicaragua and the overall situation since April 2018 ‘are leading to an alteration of the constitutional regime that seriously impairs the democratic order in the terms of Article 20 of the Inter-American Democratic Charter’, and with Permanent Council resolution CP/RES.1135 (2244/19), adopted at its regular meeting of August 28, 2019, the OAS High Level Commission on Nicaragua ( ‘the Commission’ ) was created to carry diplomatic efforts to seek a peaceful and effective solution to the political and social crisis in Nicaragua and to submit a report within a maximum of 75 days of its creation.

The Government of Nicaragua refused to meet the Commission which was duly created as a diplomatic effort by the General Assembly and prohibited its members from entering Nicaragua. Nevertheless, the Commission was able to hear testimonies from a number of victims and stakeholders that validated information already provided by independent international bodies on the situation in Nicaragua.

As mandated, the Commission is therefore submitting its report for consideration by the OAS Permanent Council. This report comprises three sections:

• Section I describes the establishment of the Commission, which was created at the regular meeting of the Permanent Council of the Organization of American States (OAS) on August 28, 2019.
• Section II highlights complaints and testimonies received by the Commission at all its meetings with Nicaraguan political groups and representatives of civil society, trade unions, campesinos, journalists, and business owners.
• Finally, section III sets out the High Level Commission’s conclusions and recommendations for the OAS Permanent Council.

In light of the analysis of the work carried out by the High Level Commission, the Commission is of the view that actions taken or permitted by the Government of Nicaragua since April 2018 are inconsistent with the rights and guarantees protected in the Nicaragua 1987 Constitution and that these are giving rise to an alteration of the constitutional regime that seriously impairs the democratic order in Nicaragua, as outlined in Article 20 of the Inter-American Democratic Charter.

The Commission would like to thank the OAS Secretariat, the Governments of Argentina, Canada, Jamaica, Paraguay and the United States for the support they provided, as well as the Government of El Salvador for allowing the Commission to meet with important witnesses in its country.

Finally, the Commission would like to thank the witnesses, who all showed courage and determination, risking their safety and security to share their experiences and inform the work of the Commission.