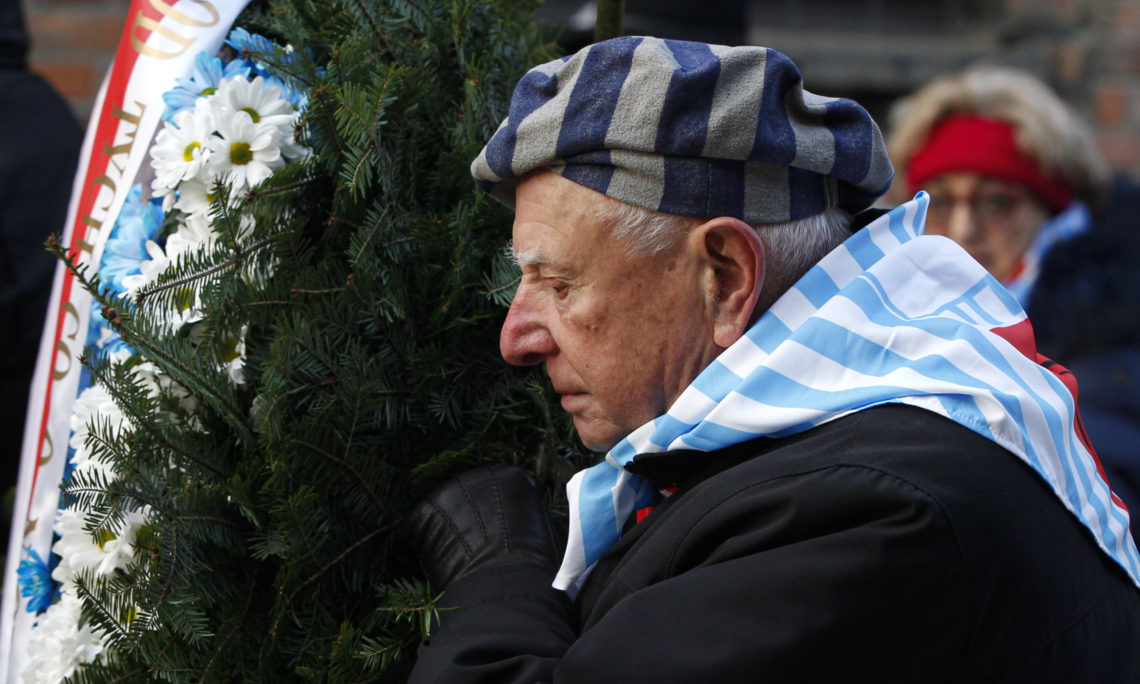 A survivor carries a wreath during a ceremony at the Auschwitz Nazi death camp in Oswiecim, Poland, Monday, Jan. 27, 2020. Survivors of the Auschwitz-Birkenau death camp gathered for commemorations marking the 75th anniversary of the liberation of the camp. (AP Photo/Czarek Sokolowski)

Mr. Chairman, I speak today on behalf of the United States on the occasion of the 75th anniversary of the liberation of the Nazi concentration and extermination camp at Auschwitz.

At the Auschwitz-Birkenau camp, evil found willing servants and innocent victims. For almost five years, Auschwitz was a factory for murder where more than 1.1 million people, including one million Jews and over 200,000 children, were killed.

Those who were not sent directly to gas chambers were sentenced to forced labor. We must work to collectively preserve the memories and history of Auschwitz to serve as a reminder that these acts must not happen again — and that we must fight the persecution of people for ethnic, religious or political reasons.

The 75th anniversary of the liberation of Auschwitz is an opportunity to pass on the stories and lessons of the Holocaust to future generations.

We commend Poland for observing this occasion with appropriate ceremonies and programs to honor the victims of Auschwitz and of the Holocaust, and we call upon international allies and partners to do the same.

The U.S. Government is committed to helping more than 80,000 survivors of the Holocaust achieve a measure of justice for material losses suffered during the Holocaust.

To this end, the State Department works to develop and implement U.S. policy to return Holocaust-era assets to their rightful owners.

The United States is also deeply concerned by continued high levels of – and in some places increasing incidents of — anti-Semitism in many countries as well as rising trends in anti-Muslim and anti-minority sentiment.

Overall, there were reports of physical assaults; verbal harassment; vandalism, including desecration of Jewish property and places of worship; and hate speech on the internet and in social media. The frequency and intensity of online anti-Semitic hate speech and harassment remains of great concern to the U.S. government.

This is why the upcoming special CAJP session on religious freedom, planned for February 20 and supported strongly by the United States, is so timely and relevant.

U.S. engagement in these topics reflects our commitment to the legacy of Holocaust survivors and to Jewish life throughout the world. The United States remains committed to the post-Holocaust imperative of “Never Again.”