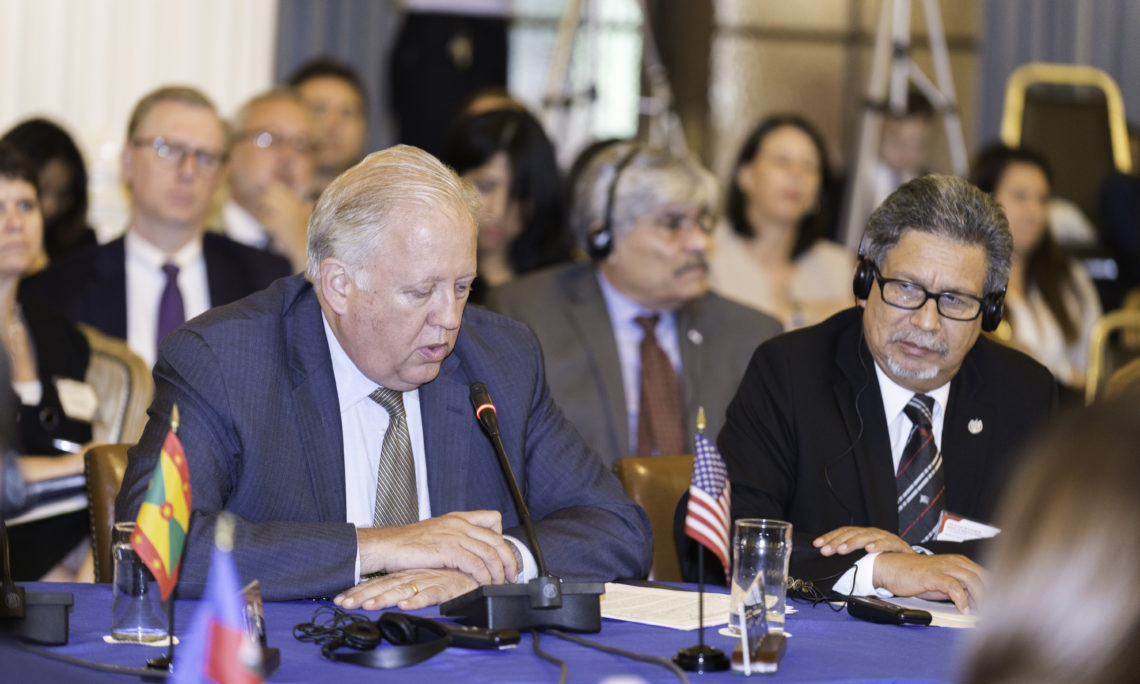 UNDER SECRETARY SHANNON:  Thank you, Mr. Chairman.  To you, sir, to the Secretary General and to all my colleagues, I extend my respect and gratitude for your presence here today as we discuss the increasingly dire situation in Venezuela.  Over the last 18 months, we have seen a dramatic erosion of constitutional rule in Venezuela.  This extends from disputes over the National Assembly’s makeup and powers; the thwarting of the recall referendum late last year; the Supreme Court’s assumption of basic legislative functions in recent months; the ongoing imprisonment of opposition leaders and other restrictions on individual freedoms, including the use of military tribunals to try civilians; the violent repression of peaceful protests; and, most recently, the effort to seat a constitutional assembly to usurp the role of the National Assembly.  All of these signal a rupture in Venezuela’s democratic and constitutional order.

At the same time, we have all been moved by the humanitarian hardships faced by 31 million Venezuelans.  Economic stagnation has given way to hyperinflation and increasing economic instability.  Venezuelan citizens struggle to maintain even basic access to food and medicine.  The United States has condemned the government’s violent crackdown against the parties of the parliamentary majority and civil society.  In just the past two months of political protests, as has been noted, more than 60 people have been killed, more than 1,000 injured, and nearly 3,000 detained, including 331 civilians charged criminally by military courts.  I know many other states have been similarly disturbed by the course of events in Venezuela and ever more determined to do what we can to address it.

Mr. Chairman, beyond this region, the European Union and the Vatican have also expressed grave concerns regarding events unfolding in Venezuela.  We also have seen a growing willingness among Venezuela’s neighbors to assist in finding a peaceful, democratic, and comprehensive solution to the problems facing the Venezuelan people.  Let me underscore my nation’s continuing call for nonviolence in the streets of Venezuela.  The rights of peaceful assembly and peaceful protest ought to be protected and not repressed.

The unfortunate decision by the Government of Venezuela to initiate the nation’s withdrawal from this organization will do nothing to resolve the country’s woes.  Withdrawal will only deprive Venezuelans of the tools and institutions they need just when they need them most.

Mr. Chairman, instead of abandoning our hemispheric community of democratic nations and further isolating itself from the international community, we urge the Venezuelan Government to fulfill the commitments it freely made last fall during its participation in the Vatican-backed dialogue process – namely, to promote free elections, respect the independence of the National Assembly, respect the freedoms of all of Venezuela’s political prisoners, and meet the humanitarian needs of the Venezuelan people.

The Organization of American States can partner with other actors in the international community on a renewed effort to identify an agreed path out of the polarization and violence we see to Venezuela toward a better future.

The United States supports the proposal contained in the draft declarations calling for the establishment of a contact group to guide the next stage of our diplomatic efforts.  We believe there is an international role in the rebuilding of trust among the main political actors in Venezuela, as well as the reduction of tensions among citizens and their institutions.

Any new effort must begin with concrete confidence-building steps of the kind laid out in our declarations today.  Many of these are no more than fulfillment of existing constitutional obligations the government has bypassed or ignored.  Our goal is to return to the full respect for the rule of law, the full respect for freedoms of political expression and participation.

Mr. Chairman, the collective commitment to promote and consolidate democracy that we, the nations of the Americas, have enshrined in core OAS instruments remains a model for other regions in the world.  Today is an opportunity for us to demonstrate that this commitment remains alive and well and relevant to the current plight of our Venezuelan neighbors.  Let us continue to show the world that inter-American solidarity can help find a path back to peace and prosperity for an essential member of our American family, always mindful that our solidarity is based on the respect and legitimacy that extends from the self-determination of peoples and not the self-perpetuation of governments.  Thank you very much.