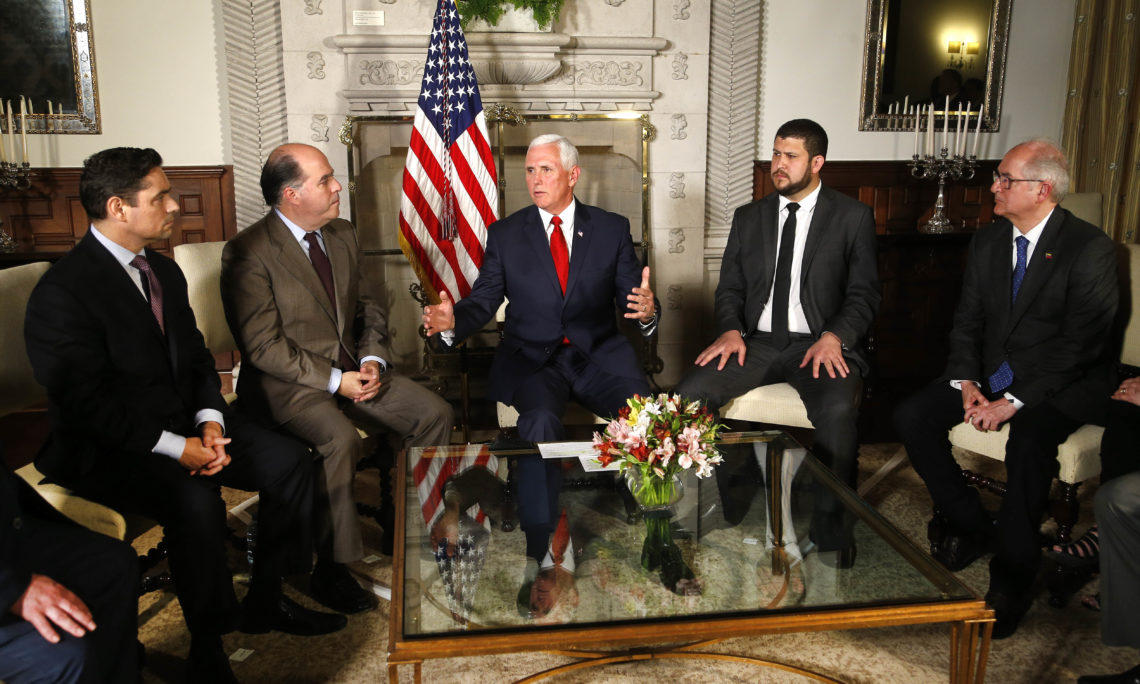 VICE PRESIDENT PENCE:  (In progress) — with you to see freedom once again, prosper and thrive, and to end the humanitarian crisis.  It is Venezuela today.

The simple truth is that Nicolas Maduro has turned Venezuela democracy into dictatorship.  And the leaders gathered around here know that, have lived that, and fought against that.  His actions have resulted in a wave of corruption, crime, and abject misery of the people of Venezuela.  Nearly 9 in 10 Venezuelans today live in poverty.  Stores are empty.  Food is hard to find.  Major hospitals have only 5 percent of basic supplies.

The Venezuelan people are literally, in many cases, starving.  Many have died of starvation and deprivation.  And millions have fled the oppression of the dictatorship in Venezuela.  Some 2 million in number have left their country to seek refuge in neighboring lands, and are continuing to flee in record numbers; by some estimates, nearly 5,000 people every day.

As you all know, and we’ve spoken with several of you before, under President Trump’s leadership, the United States has been enforcing strong sanctions and bringing economic and diplomatic pressure to bear on the Maduro regime, and we will continue to.

We’re providing a little more than $2 million in support for Venezuelans in Colombia.  But today, with Mark Green of USAID, I’m very pleased to announce that the United States will devote an additional $16 million in the region to support Venezuelans who fled the tyranny and dictatorship and deprivation of that nation, and are now in Colombia.

In the course of this Summit of the Americas, I’ll be calling on America’s allies across the region to join us in this humanitarian effort.  Because under President Donald Trump, we want one message to be clear: We are with the people of Venezuela.  We oppose the tyranny, the repression, the dictatorship, the corruption.  But we are with the people of Venezuela, and we’ll continue to do everything in our power to provide sustenance and support to those who have fled this tyranny.

The U.S. and our allies, I believe, are prepared to do much more than even that which we’re announcing today to directly help the long-suffering Venezuelan people.  Sadly, with regard to the people who are still in your native country, Nicolas Maduro stands in the way, refusing humanitarian aid to be delivered to Venezuela.  And the world deserves to know that.

I’m very honored to be joined not only by these opposition leaders in Venezuela, but by two important members of the President’s diplomatic corps, and I want to recognize them before we hear from these leaders.

The Administrator of USAID, Mark Green, is with us — the agency that will administer these current and new funds for refugees who have fled from Venezuela — and also, Paco Palmieri, the Acting Assistant Secretary for Western Hemisphere at the Department of State.

So before we hear from these courageous leaders, let me recognize my fellow Americans who are with us.

ADMINISTRATOR GREEN:  Thank you, Mr. Vice President.  You said it very well, so I’ll just add a few brief thoughts.  To be clear, the humanitarian assistance that we are announcing today is not about politics; it is about helping the victims of a massive crisis.  This aid is based upon need, and need alone, because America will always stand with the hungry and the displaced.  That’s simply who we are as Americans.

However, we cannot pretend that this situation falls under the same category as the natural disasters that we have seen over the last year — hurricanes and earthquakes.  Let’s be honest: In some ways, this is more tragic because it is entirely manmade and regime-made.

Now, we have all heard stories of the terrible suffering and the hunger among Venezuelans.  What I think many people don’t realize, especially those of us in the U.S., is that this crisis is also causing the largest displacement in Latin American history.  Hundreds of thousands of Venezuelans are fleeing their homeland to escape the brutality and the corruption of the Maduro regime — 1.6 million, in fact.  They’re fleeing not only to their immediate neighbors, but to something like 20 other countries, as well.

Remember, Venezuela was once the wealthiest nation in South America.  It has vast natural resources.  It should be a donor nation, a regional leader, providing assistance to other less-developed nations and less-fortunate people.  But instead of responding to suffering, it’s driving it, causing widespread shortages of food, medicine, and fuel.

The assistance that we are announcing today will help Venezuelans in Colombia and Brazil cope with hardship, for things like potable water, shelter, and other supplies.  As good neighbors and supporters of the Venezuelan people, we are glad to be able to help.  But we all know that this action is merely a short-term response, not a solution.

With that, let me turn things over to our partner in this, Paco Palmieri.

As Vice President Pence stated, the United States is providing nearly $16 million in additional humanitarian assistance to help meet the basic needs of these men and women who have lost everything to escape the Maduro regime.

This funding supports the regional response by the United Nations High Commissioner for Refugees, international organizations, and NGOs responding to the crisis.  This funding will provide support for the most vulnerable, security from violence and exploitation, and work and education opportunities for Venezuelan people.

We have been committed since the early stages of the crisis.  Last year, UNHCR allocated more than $3 million provided by the United States to provide immediate humanitarian assistance.

Recently, UNHCR issued a $46 million emergency appeal for Venezuela, covering nine countries across the region.  For example, with this U.S. funding, UNHCR will work with local governments to increase registration of Venezuelans and support their access to local services such as healthcare, education, food, and shelter.

The United States is impressed by the generosity and compassion of those countries throughout the hemisphere who lead by example, hosting and providing humanitarian assistance to hundreds of thousands of Venezuelans.  We also command the humanitarian contributions from our partners in Asia and Europe, and encourage additional contributions to meet growing humanitarian needs.

Unfortunately, the Maduro regime continues to reject offers of international assistance.  President Maduro should welcome this international aid, including food and medicine, and we call on him to do so immediately.

The United States will continue to stand with the international community in support of the Venezuelan people and their right to have a voice in their government.  Thank you.

Julio is on an extended tour of foreign capitals to promote the opposition’s cause, sparking some rumors that he may seek asylum, which he strongly denies.  His commitment is to Venezuela, and he’s a man of great courage.  And I’m honored to be with you.

What we want is a prosperous Venezuela, with future, with democracy; a united country, not a divided one.  And we believe that we are near this change.  And thank you for the international community for helping and being with us in this process.  And we wouldn’t want allowed to have in Latin America a second Cuba, as in the case of Venezuela, but a Cuba with oil, gas, and all the richness in the direction against democracy in Latin America.  On the contrary, a democratic country, open for the future of all over America as it have to be.

VICE PRESIDENT PENCE:  Thank you, Julio.  Great honor to have you here.

David Smolansky is the leader of the 2007 generation of student-turned opposition mayors.  And he’s the former mayor of El Hatillo.  The pro-Maduro Supreme Court issued a warrant for your arrest last year, causing you to flee to Brazil.  And he now resides in Washington, D.C. but his heart is in Venezuela, and he’s been a great and courageous champion for freedom in his native land.  Thank you.

So I have just arrived from Cucuta, which is the border of Venezuela.  I was close, but at the same time far from my country.  I saw thousands of people fleeing that bridge from between Colombia and Venezuela every single second.  Children with malnutrition, adults with no medicine, and people just escaping.

So this support that you’re giving to Venezuelans that are suffering in Colombia is very important to guarantee right to education, healthcare, shelter.  It’s something that we are — thanks for that.  And we have to keep working to recover democracy, to recover freedom in Venezuela.  Because if we recover freedom and democracy in Venezuela, not only Venezuelans will be benefitted, but also the whole region will be benefitted.  So thank you.

And let me recognize the former Mayor of Caracas, Antonio Ledezma.  He was arrested in 2015, placed under house arrest.  He escaped in 2017, reaching Colombia and ultimately Spain.  But he continues to be a strong — strong voice for freedom and the restoration of democracy in Venezuela.

And, Mr. Mayor, thank you for being with us.

VICE PRESIDENT PENCE:  Thank you.  Thank you.  Lastly, let me recognize Carlos Vecchio, a top lieutenant of the opposition leader, Lopez; a co-founder of the party of Voluntad Popular.  After Lopez was imprisoned in 2014, Vecchio was indicted and went into exile in Florida.  We have met on several occasions.  And, Carlos, I’m a great admirer of Mr. Lopez and you, and we appreciate you being with us today.

VICE PRESIDENT PENCE:  Before we go forward, I wanted to ask about Leopoldo Lopez and his wife, Lilian.  I know we spoke last year.  How is he?  How is he holding up?  And how are they?

As you know, Lilian delivered her third son — a daughter, sorry.  Daughter.  So they are happy because of that.  But at the same time, they are suffering what the Venezuelan people are suffering.

And I would like to highlight, Mr. President — Vice President, that Leopoldo is only one of the political prisoner.  But we have thousands of political prisoners.  And I want to talk on behalf of him.  So thank you for asking for Leopoldo.

VICE PRESIDENT PENCE:  Well, I hope you’ll convey our regards and our prayers for him and his family, and our prayers to all of those that are in prison for their commitment to freedom and to the Venezuelan people.

VICE PRESIDENT PENCE:  Let me again thank you.  Thank you for your compelling stories.  The President and I thought it was altogether fitting to begin the United States presence here at the Summit of the Americas, here in Latin America, highlighting the plight of the Venezuelan people.  And to have the opportunity to do that with these courageous leaders who have paid a price and who represent, literally, millions who continue to struggle under the weight of the dictatorship and the deprivation that is Venezuela today is something for which the President and I are both very grateful.

So  I’ll end where I began.  On behalf of President Trump and the American people, I hope our efforts today to continue to expand American aid is an encouragement.  We’ll be delivering a message to bring our allies together to confront this humanitarian crisis.  But we’ll also be bringing a message for additional sanctions, additional isolation, and additional diplomatic pressure beginning in our hemisphere, but across the wider world, to recognize that Venezuela is a dictatorship.  Democracy has been denied.  Basic services are being deprived in what was once one of the richest countries in South America.

And we are going to remain committed to stand with you, to stand with the people of Venezuela until we achieve and restore democracy in this hemisphere of freedom.

So thank you, and God bless you for your leadership.  We’re with you.  Thank you all.