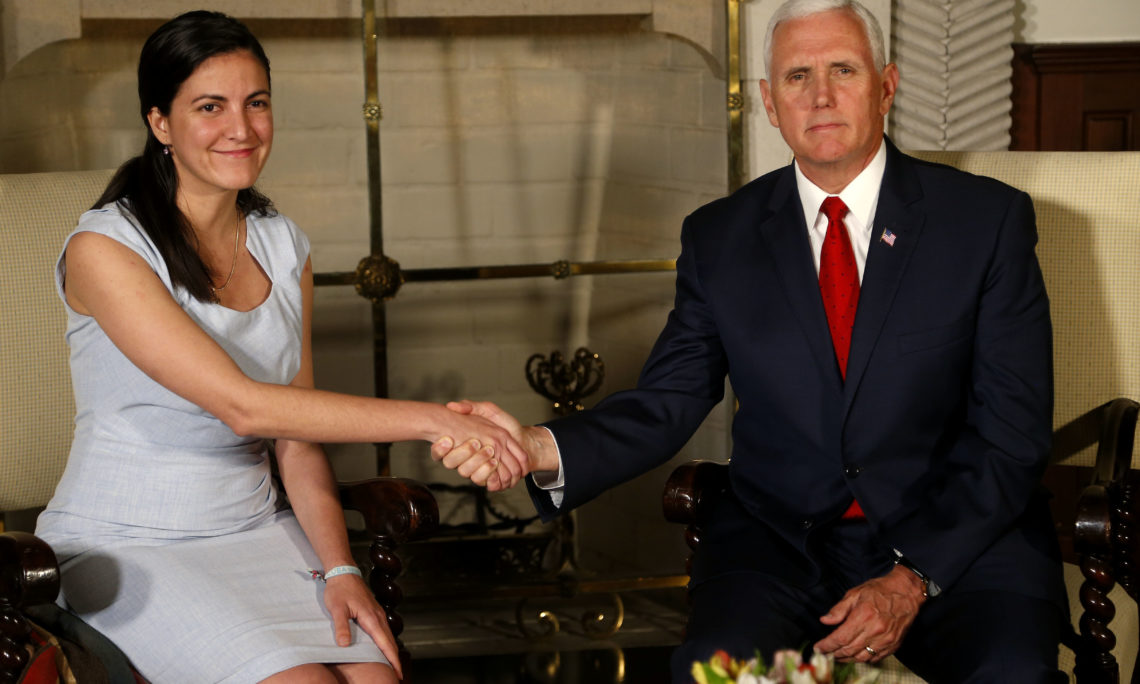 Remarks by Vice President Pence in Meeting with Cuban Dissident

VICE PRESIDENT PENCE:  Well, thank you all for joining us.  It’s my great honor to have the opportunity to meet with Rosa María Payá.  She is the daughter of Oswaldo Payá, the head of the Christian Liberation Movement and also the 2002 Sakharov Prize winner, who died under mysterious circumstances in 2012 in Cuba.  And we have — you have our deepest condolences.

PAYÁ:  Thank you so much.

Ms. Payá is an activist who’s continued her father’s legacy for human rights advocacy since his death.  Ms. Payá has served as President of the Latin American Network of Youth for Democracy since 2015.  But notably, she is also leading the Cuba Decide campaign, which seeks to effect a democratic transition in Cuba to see democracy and freedom and basic human rights restored.

She’s addressed the U.N. Human Rights Council and, in fact, has, despite her international recognition, she has struggled herself in advancing the freedom and liberty of the people of Cuba having, in fact, been arrested at the 2015 Summit of the Americas in Panama.

But she is here.  And I didn’t want to begin my formal participation in the Summit of the Americas without having the opportunity, Rosa, to meet you.  And while there is a great focus at this great Summit of the Americas on the dictatorship and the deprivation and the struggle of the people of Venezuela, I wanted to assure you, on behalf of President Trump, that the American people and our administration are with you.  And we are with you for the freedom of the Cuban people, for the release of political prisoners, for the restoration of basic human rights, and for free and fair elections.

And President Trump has taken decisive action to bring pressure to bear on the regime in Cuba.  And your presence here in this time gives us another opportunity to continue to highlight the commitment of the American people to a free and democratic Cuba.  So thank you very much.

PAYÁ:  Thank you so much.

VICE PRESIDENT PENCE:  It’s an honor to be with you, and I welcome your thoughts.

My father was killed by that regime almost six years ago.  His crime was to denounce what they are trying to do today.  They are trying to make a false, a fraudulent transition from power to power, from a dictator to the inheritors of the dictatorship.

We need another system.  We need a democracy.  And we are ready to push for that to happen.  The way to do it is binding plebiscite.  The way to do it is a free vote on the island.  And I think that your presence, your support, the support of the administration and the support of all the democratic administrations on this region, on the Americas, in this moment, is fundamental not just for ending with that dictatorship and putting the power where the power should be — that is in the hand of the people — but also to end that threat that has been the interference of the Cuban dictatorship in the rest of the region.

One, the determinant factor in the collapsing of the democracy in Venezuela have been the Cuban regime, and have been working through the whole region deteriorating and undermining democracies in other countries, also.

We are asking for the democracies of the region to condemn a false succession, a false transition; not to recognize the government that has not been elected by the Cuban people; and to support the end of the impunity of that criminal regime, to support the life of those Cubans that fight inside the island, to support the liberation of the political prisoners.

Thank you so much for taking that into consideration.

VICE PRESIDENT PENCE:  Well, Rosa, thank you.  I’m greatly inspired by your courage and by your leadership that’s inspiring people across Cuba, Cubans across America and across the wider world.  And Rosa makes such an important point, that as we look across this hemisphere of freedom, and we see the collapse and the dictatorship in Venezuela, that the malign influence of decades of dictatorship and repression in Cuba has driven and expanded.

And so I want to assure you, as you witness President Trump reversing the course that the prior administration and the United States was on with regard to Cuba, taking a strong stand for fundamental reforms for the reestablishment of democracy, for the release of political prisoners, that I just want you to know this President and the American people are with you.  And we will continue to stand with you and pray for you as you fight for the liberty of the people of Cuba.

May God bless you.