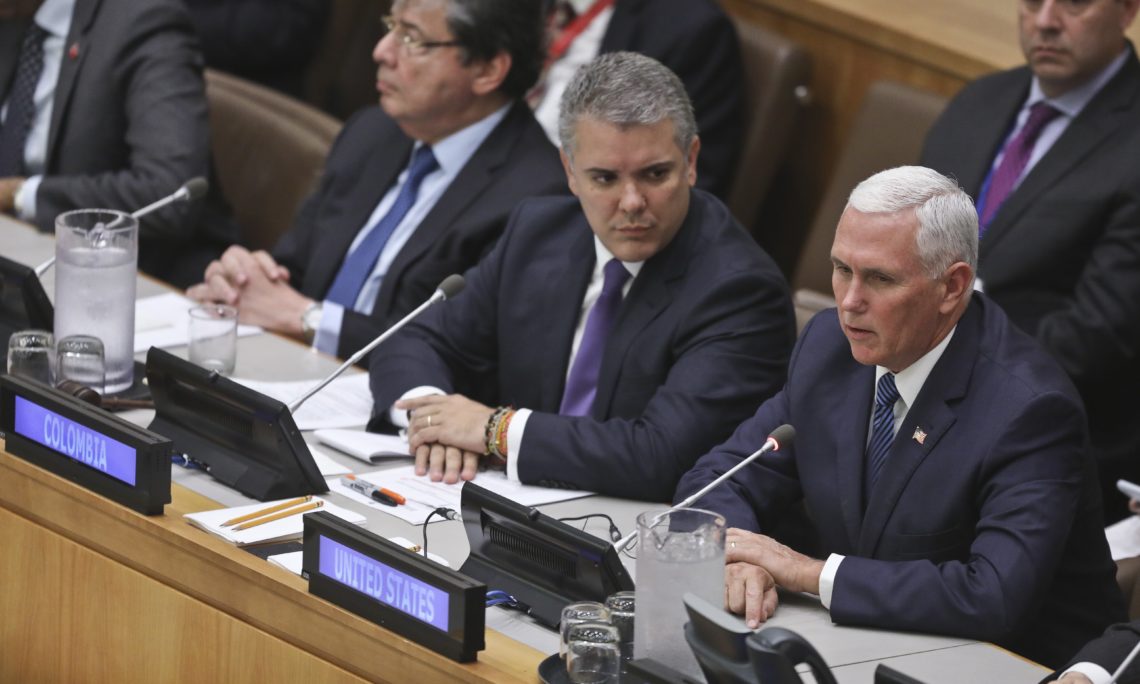 THE VICE PRESIDENT: President Duque, thank you for convening this Ministerial meeting, for your words today, and for working tirelessly both in Colombia, and now on the world stage, to form a comprehensive response to the Venezuelan migration crisis. And not just simply to the consequences of the crisis in Venezuela, but to engage the distinguished leaders who are here, the nations represented here, to bring renewed focus on the political, economic, and humanitarian crisis that continues to unravel to the great suffering of the people of Venezuela.

I want to thank President Varela of Panama. I want to thank our Deputy Secretary of State Sullivan, who is with us today. Our co-hosts, the Ministers of Canada and Peru. And to all of you distinguished representatives of nations not only across this New World, but around the world, for making time for this important forum.

I bring greetings to each of you and gratitude for your presence today from a great champion of freedom not only in this hemisphere, but all over the globe, who you heard from this morning. I bring greetings from President Donald Trump.

This morning, when President Trump addressed the United Nations General Assembly, the world saw firsthand the resolve and the determination of the United States of America and all the free nations of the Western Hemisphere to stand with the Venezuelan people and stand up to their oppressors.

As the President said today, what is happening in Venezuela is a “human tragedy.” Nicolas Maduro, by dismantling his democracy, by imposing the failed policies of socialism on his people, has, as the President said, bankrupted that oil-rich nation, what was once one of the wealthiest nations in our hemisphere, and, as the President added, driven its people into abject poverty, with millions of Venezuelans forced to flee in anguish inflicted by the policies of the Maduro regime and its Cuban sponsors.

Just moments ago, President Trump and I met with President Duque, and we discussed in detail not only the situation past and present in Venezuela, but a recognition that the hardest work in addressing this crisis lies before us. And that’s what brings us here today.

America, throughout our history, has stood for freedom. And America stands with Colombia and with all the freedom-loving nations of the world.

We’re here today because, in this New World, what was once one of the most vibrant democracies in our hemisphere — and prosperous — under the Maduro regime has one of the worst murder rates in the world, and nearly 9 out of 10 Venezuelans live in poverty.

Every day that Nicolás Maduro clings to power, some 5,000 Venezuelans leave their homes to escape the tyranny of that regime. They pour into neighboring nations, including many of those so well represented here today.

Since 2017, more than 2.6 million Venezuelans have fled their homeland in a mass exodus, escaping violence and tyranny, and deprivation. It is the largest cross-border exodus in the history of our hemisphere. And as President Duque just said moments ago, it is arguably the worst crisis Latin America has ever faced.

Like many of you in this room, I have seen firsthand the results and the impact on people suffering under the deprivation and the violence of Venezuela who have fled that country. I’ve visited each of the nations I just recited. I have met with refugees from the collapsing democracy and tyranny and deprivation of Venezuela, and it is heart breaking.

I’ll never forget meeting with migrants when my wife and I visited Colombia. As we made our way through a small shelter, I came across a grandmother who told me that she had finally decided to take her four grandchildren and make the trek all the way across Venezuela to leave for Colombia because things had gotten so bad that the children were required to stand in a line at five in the morning to get one ticket so that they could purchase one piece of bread at five in the afternoon. It was heart breaking.

When we were in Manaus, we were in a church shelter, and I’ll never forget a father surrounded by his wife and two small children, who said to me, with tears in his eyes, “It is a terrible thing to come home at the end of a long day and tell your children that today we are not eating.” That’s the reality in Venezuela.

We speak of political collapse. We speak of violence and tyranny. But we also have to understand the human cost of these failed policies as well. And we have to meet that challenge with resolve and with unity, with determination and with generosity. And we are meeting that.

On behalf of President Trump, I’m pleased to announce today that the United States of America will provide an additional $48 million in humanitarian assistance to all of our partners in the region, to confront the humanitarian crisis that is unfolding before us.

As your nations confront the challenges of this migration crisis, the United States of America will stand with all of you in that.

But we all know that providing aid to those who are suffering under the tyranny in Venezuela is not the real answer. This crisis will only keep growing as long as the Maduro regime remains in power and continues to deny the Venezuelan people democracy, and continues to impose the failed socialist agenda that has impoverished that nation.

That’s why we must cut out the corruption at the heart of this crisis, and we must do all that we can to continue to isolate the Maduro regime. Toward that end, as President Trump announced today, the United States is imposing tough new sanctions on Maduro’s inner circle and close advisors — those that are exploiting the Venezuelan people and supporting drug traffickers and criminals who threaten the stability not just of the region, but of our hemisphere as a whole.

We must stand together in this effort, in new and in renewed ways, to isolate this regime economically and diplomatically. But rest assured, the United States of America will continue to stand with our allies on behalf of their security.

News reports today are that the Maduro regime has moved military troops to the border of Colombia as they have done in the past, in an obvious effort at intimidation. And let me be clear: The United States of America will always stand with our allies for their security. And the Maduro regime would do well not to test the resolve of the President of the United States or the American people in this regard.

And as President Trump made clear again today, we will remain resolved to stand with freedom-loving people not only in our hemisphere, but the people of Venezuela who long to see freedom restored and democracy restored in their land.

And we take all these actions with the usual optimism of the American people, as we believe in freedom. We believe that as Simón Bolívar declared, “A people that loves freedom will in the end be free.” And the people of the New World love freedom.

So thank you for all that the nations represented here have done, so far, to meet this crisis and to partner with us.

I trust our announcement today of renewed American support — the President’s words today before the United Nations General Assembly — give evidence of the importance of this issue not only to this administration, but to the American people.

And we promise that we are prepared to continue to stand with you to assist the victims of the Maduro regime, to support the Venezuelan people’s noble quest to rescue their country, to rebuild their democracy, and reclaim their birthright of freedom.

And I know that with your strong support, with the generosity of the nations represented here, with the solidarity of freedom-loving nations not only across the New World, but across the world, we will see freedom restored in Venezuela to the benefit of their people, our hemisphere, and the world.

So thank you very much, and God bless you. (Applause.)