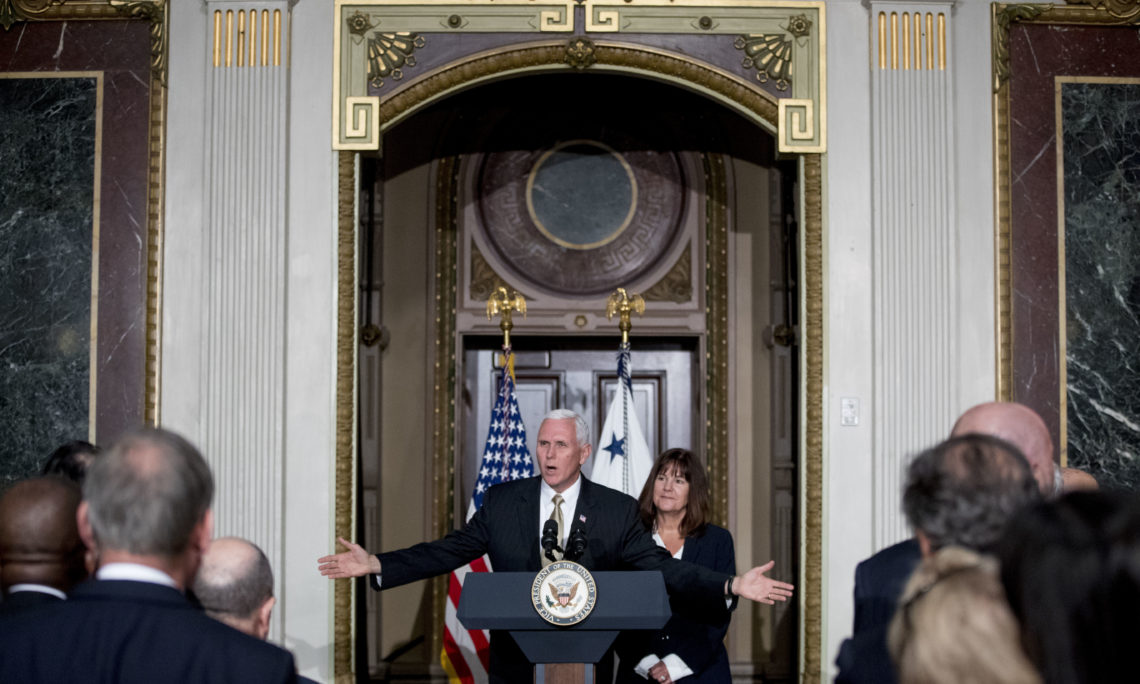 Vice President Mike Pence, accompanied by his wife Karen Pence, right, speaks at a reception for the Organization of American States in the Indian Treaty Room at the Eisenhower Executive Office Building on the White House complex in Washington, Monday, June 4, 2018 (AP Photo/Andrew Harnik)

THE VICE PRESIDENT:  Well, thank you, Deputy Secretary Sullivan.  To Secretary General Almagro, Ambassador Trujillo, and to all the great representatives of freedom-loving nations across the New World: On behalf of the First Family, my wife and I say, welcome to the White House.  (Applause.)

Before I begin, allow me to express our deepest sympathies to people across Guatemala affected by the volcanic eruption yesterday.  Our hearts are with the people of Guatemala.  Our hearts are with all of those that are suffering in the wake of this terrible event that’s already claimed at least 60 lives. And to Foreign Minister Jovel, please know that, tonight, your country and your people are on our hearts and in our prayers.

And to all of you, I begin this evening by bringing greetings from a friend of mine and a great champion of freedom across the Western Hemisphere.  I bring greetings from the 45th President of the United States of America, President Donald Trump.  (Applause.)

You come here to the White House at a momentous time in the life of our administration.  This is the 500th day since the beginning of this administration, and it has been 500 days of extraordinary progress.  I’m pleased to report to all of our neighbors across this hemisphere, we have made historic investments in our national security.  We’ve passed historic tax relief, tax reform, and regulatory reform.  And the American economy is humming as a result.  3.4 million new jobs.  Billions of dollars in new investments.  The lowest unemployment rate in nearly 50 years.  And I know I speak for all of the American people when I say with confidence to our neighbor that when America prospers, our entire hemisphere prospers.  And we are proud of the progress that we’ve made.  (Applause.)

Our President has also taken decisive action to renew American prosperity and security, at the same time.  We’ve stood strong — stood strong to restore American leadership at home and abroad.  And it’s that leadership that extends the hospitality of our President to each one of you tonight.

As I made clear when the President had me travel to South America on my first trip last year: The Western Hemisphere is a key priority for this administration.  Under President Donald Trump, as we’ve said again and again, we will always put the security and the prosperity of America first.  But America first does not mean America alone.

And the United States is proud — proud to stand with free nations across this hemisphere in the pursuit of our shared goals.  That’s why we joined with so many of you in founding the Organization of American States seven decades ago.  And join me in congratulating the OAS on 70 years of standing for freedom in the New World.  (Applause.)

As we gather tonight in the midst of this important meeting of the General Assembly, it’s noteworthy for us to reflect on why the OAS was formed.  Seventy years ago, as its charter says, “The historic mission of America is to offer a land of liberty.”  And we now have that opportunity, beginning our eighth decade, to rededicate ourselves to that principle.  We’ve made it clear from the outset of the OAS that, here in the New World, we aspire to be a hemisphere of freedom.

Over the years, freedom has made great advances across our region, illuminating a better path and a better life for millions.  But as we gather here, sadly the dark cloud of tyranny still hangs heavy over a few of our neighbors, and it casts a shadow across our hemisphere as a whole.

In Cuba, the Castro name has begun to fade, but under a handpicked successor, their legacy endures and the oppressive police state they established is ever-present.  Under President Donald Trump, America will always stand for Que Viva Cuba Libre.  (Applause.)

In Nicaragua, the government of Daniel Ortega, as we all know, is committing and condoning terrible violence against its people in recent days, including attacks on a peaceful protest in the country’s Mother’s Day celebration that injured hundreds and killed nearly a dozen innocent people.

On Saturday of this week, that chaos claimed the life of an American citizen.  And our deepest sympathies are with his family, but they’re also with all of those who have lost loved ones in this senseless violence and crisis.  The United States and our allies must speak with one voice and say to the Ortega government: The violence must end, and the violence must end now.  (Applause.)

The United States calls on the Ortega government to end the attacks on peaceful protestors and uphold its citizens’ basic rights, and turn Nicaragua back toward democracy.

And finally, there’s the plight of Venezuela that brings us together here tonight.  The regime of Nicolas Maduro has turned a free and prosperous nation into one of the most poorest and most despotic in our hemisphere.  The once-great Venezuelan economy and government is now nothing more than a failed state.

The election held two weeks ago was a disgrace.  The regime had banned major parties and barred opposition leaders from standing for office.  On Election Day itself, Maduro’s henchmen engaged in widespread intimidation and illegal actions, rigging the vote to silence the people’s voices, and ensuring victory for the regime’s failed socialist ideology.

The United States has called this election what it really was: a sham; a disgrace to democracy and a disgrace to the tradition of freedom that we celebrate across the New World.

For our part, President Trump has already taken decisive action to hold the Maduro regime accountable, [with] unprecedented sanctions, and most recently an executive order that presents [prevents] the regime from profiting off of Venezuela’s economic implosion.

Thanks to the President’s leadership, Venezuela recently released an American hostage that had actually been held captive for nearly two years.  And we were pleased to be able to welcome Joshua Holt back home, and even here to the White House.

But irrespective of his release, the United States’ position remains firm.  Sanctions will continue until Venezuela is free once more.  Maduro must hold free and fair elections, release all political prisoners immediately and unconditionally, end the repressive economic deprivation that is starving and costing lives of innocent Venezuelans and driving millions to leave their homes and to leave their country.

The crisis is already the largest cross-border mass exodus in the history of our hemisphere.  More than 5,000 people leave Venezuela every day.  And as media reports this morning demonstrated, 48,000 teachers have abandoned their posts, according to estimates, and likely fled, as well.  The country’s most basic services are falling apart, adding to a crisis fueled not just by repression but by its consequences of little food, little medical care, and little hope for the Venezuelan people.

Let me say from my heart, on behalf of President Trump and our entire administration, how grateful we are to all the nations who gather here tonight, the way you’ve stood with us, the way you’ve taken individual action in one country after another to support the Venezuelan people and pressure the Maduro regime.  But let me also say with great respect: The time has come for freedom-loving nations across this hemisphere to do more.

Today, all our nations agreed to take up the issue of Venezuela’s collapse during this General Assembly.  And tomorrow, we will have an opportunity to take an important step to hold the Venezuelan government accountable.  Whether the OAS takes this step, we believe it will speak volumes; it will speak volumes about the strength of this organization’s commitment to freedom here in the New World.

So tonight, I want to say to all of the friends and allies gathered here: The time has come for all of us to live up to the Inter-American Democratic Charter, which declares that “the people[s] of the Americas have a right to democracy.”

Venezuela has repudiated this promise.  Tomorrow, the General Assembly will have the opportunity to begin the process of suspending Venezuela from membership and participation in the OAS.  And so tonight, on behalf of President Trump, I call on the community of free nations, from across this New World, to expel the Maduro dictatorship from the Organization of American States.  The OAS must stand for freedom.  (Applause.)  And now is the time.

All our nations have a chance to demonstrate new leadership in this new era.  A majority of this region — the overwhelming majority of this region — is united.  By joining us tomorrow, you will prove your commitment to forge stronger bonds with the United States and also advance policies that will improve the lives of suffering people across Venezuela and all the nations that are struggling in the midst of its collapse.

Be assured to this: The United States is committed to expand our cooperation with your nations on issues ranging from our financial investments, economic growth, energy, infrastructure, security, and prosperity.  We are committed to building the ties that bind nations across the New World.

Tonight, it’s my pleasure to be able to announce to you that, at the President’s direction, later this month I will return to South America for my third visit to the region in less than a year.  I’ll be traveling to Brazil and Ecuador.  In fact, I spoke to President Moreno of Ecuador earlier today, and accepted his kind invitation to travel later this month.

On my trip, we will highlight opportunities — opportunities for stronger security and economic relationships.  And we’ll seize the opportunity to bring renewed attention on the collapse into tyranny and the humanitarian crisis that has overcome Venezuela.

So my message to all of you in this gathering this evening is, first and foremost, a welcome and a thanks.  Thank you for your friendship and your partnership on behalf of freedom with the United States of America.

Tonight is a small token of our appreciation for the stand that so many have taken to stand for freedom and for libertad across this New World.  And I’ll make a promise to you: Stand with us, and know that we will stand with you.  Work with us, and we will work with you.

And know that, under President Donald Trump, the United States will continue to be a steady partner and a friend to all the nations who love freedom across this New World.  And I truly believe, as we stand together for freedom, with your courageous leadership, with President Donald Trump in the White House, and with God’s help, we will, in our time, achieve that dream to be a hemisphere of freedom.

Thank you.  God bless all the nations represented here.  And God bless the United States of America.  (Applause.)