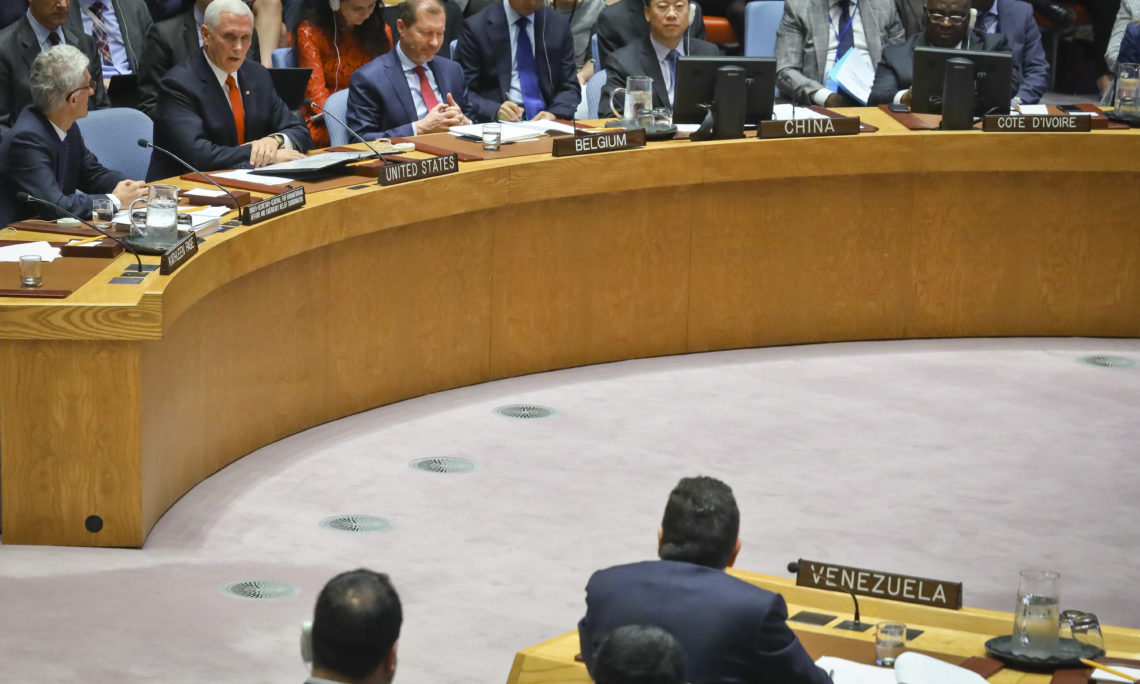 THE VICE PRESIDENT:  Mr. Secretary General, Mr. President, to all the members of the Security Council: I am here today, on behalf of the President of the United States of America, to discuss the ongoing crisis in Venezuela and to call on this body to stand up for democracy and the rule of law in that nation that has suffered so much.

Article 24 of the U.N. Charter confers on this Security Council the “responsibility for the maintenance of international peace and security.”  As another American President said many years ago, “The United Nations is designed to make possible lasting freedom and independence for all its members.”  It is why this institution exists.

For six long years, the people of Venezuela have suffered under the heavy hand of oppression.  The Maduro regime’s socialist policies have shrunk their economy by nearly half.  In what was once one of the wealthiest countries in our hemisphere,  9 out of 10 people now live in poverty.  The average Venezuelan has lost more than 20 pounds through deprivation and malnutrition.  Thousands of Venezuelan children are starving.  And at this very hour, infants in hospitals across Venezuela are dying for lack of basic medical care.

And the Maduro regime, in the midst of this deprivation and suffering, has used violence and intimidation against anyone who opposes their actions.  In the last three months, the regime has thrown at least 1,255 people into jail, without any due process of law, and killed at least 40 protestors.  That’s the nature of the regime that we’re dealing with.

But the Maduro regime is not only a threat to the Venezuelan people; it is a threat to peace and security of the wider region as well.  The rising desperation in Venezuela has fueled a mass exodus, the likes of which we have never seen in the Western Hemisphere.  More than 3 million Venezuelans have now abandoned their beloved country.  And if things don’t get better, it is estimated that another 2 million are expected to follow before the year is out.

And traveling through the region, my wife and I witnessed the results of this deprivation firsthand.  At a church in Manaus, Brazil, we spoke to families who had fled the deprivation in Venezuela.  And I’ll never forget when a father looked at me with his two young boys standing at his side and said how hard it was as a father to come home at the end of the day and say, “We’re not eating today.”  And as he said it, his two little boys looked up and nodded, recalling those days.

And then there was the day in Cartagena, Colombia, at another mission where Venezuelan people had fled the deprivation in their country.  And a grandmother told me how it had gotten so bad in their small rural town, her grandchildren had had to rise at four in the morning to get a single ticket to purchase a piece of bread at four in the afternoon.  The children were starving.  And she gathered up her grandchildren and fled the country.

Those are the stories the world deserves to hear of deprivation.

And the truth is, those who stay behind are subject to crime, violence, and lawlessness.  Thieves in Venezuela don’t rob banks; they rob restaurants for food.  Vicious gangs and so-called colectivos have turned the streets into warzones.  And Venezuela now has the highest murder rate in the world, as more than 70 people are murdered every single day.

Venezuela is a failed state, and as history teaches, failed states know no boundaries.  Drug traffickers, criminal gangs, even terrorists like Hezbollah, are exploiting the chaos in Venezuela to gain a foothold in the region and export crime and violence.  Were we to let the crisis continue, the chaos and suffering will only spread.

The struggle in Venezuela is between dictatorship and democracy.  Nicolás Maduro is a dictator with no legitimate claim to power, and Nicolás Maduro must go.

But for all of the suffering of the Venezuelan people, across Venezuela, in cities large and small, people are rising up.  They’re rising up against their oppression and deprivation.  Today, those courageous Venezuelans will take to the streets again.  And as President Trump said not long ago, “the fight for freedom [in Venezuela] has [just] begun.”

Just three short months ago, after Nicolás Maduro was sworn into his second term stolen in a sham election, the National Assembly — the only duly elected body in Venezuela — exercised its power under the constitution and recognized a new leader: Interim President Juan Guaidó.

And all across the Western Hemisphere, nations have been standing up to declare their support for President Guaidó.  Last month, the Inter-American Development Bank voted to seat President Guaidó’s representative.  Earlier this week, the G7 issued a statement saying the May 2018 presidential election lacked legitimacy and calling on the Maduro regime to, in their words, “restore the authority of the National Assembly.”

And just yesterday, the Organization of American States –- the oldest regional organization in the world –- voted to stand with the Venezuelan people and recognize the Guaidó government’s representative as the only true representative of Venezuela.

At President Trump’s direction, the United States was proud to be the first nation to recognize Interim President Juan Guaidó as the legitimate President of Venezuela.  And today, 54 nations have joined us.

The Western Hemisphere has spoken with a clear voice.  Nations across the world have spoken.  It’s time for the United Nations to speak.

In February, the United States introduced a resolution to this Security Council that called for the restoration of democracy in Venezuela and for the Maduro regime to allow all humanitarian aid to enter the country.  The resolution was not approved.  Two nations which continue to back this brutal regime used their vetoes to stop this body from taking action.  And while Russia and China continue to obstruct the Security Council, rogue states like Iran and Cuba are doing all they can to prop up the Maduro regime.

For decades, Cuba has tried to create client states across our region.  While normal countries export goods, Cuba exports tyranny and strong-arm tactics.  Even now, Cuban military and intelligence services train and support and equip Venezuela’s secret police as they silence opponents, jail and torture members of the opposition.

And this week, in addition to Cuba’s action, Caracas received a delegation from Iran to begin direct air service between these two rogue capitals.  This blacklisted airline is used to export terrorism by Iran’s Islamic Revolutionary Guard Corps, which President Trump formally designated as a Foreign Terrorist Organization on Monday.

This is the company that Nicolás Maduro keeps.  And these nations continue to prop him up even as he inflicts suffering on the Venezuelan people.  Just two months ago, the dictator in Caracas actually danced while his own citizens were shot and truckloads of desperately needed food and medicine burned.

Unlike nations that are subsidizing the dictator in Caracas, under the leadership of President Donald Trump, the United States has been standing with the people of Venezuela, and we are committed to helping the families and communities that have been devastated by the Maduro regime.

At this point, the United States has sanctioned more than 150 government officials and organizations loyal to the dictator.  We’ve sanctioned state-owned businesses to prevent the Maduro regime from robbing the people of what is rightfully theirs.  And as President Trump has said, we can be “a lot tougher.”

In addition, the United States has positioned more than 500 metric tons of food and humanitarian supplies on the Venezuelan border ready for immediate distribution.  We’ve provided $200 million in aid to support displaced Venezuelans and the host communities that support them.  And today, at President Trump’s direction, the United States is announcing an additional $60 million in humanitarian assistance to address this crisis.

The United States of America will continue to exert all diplomatic and economic pressure to bring about a peaceful transition to democracy in Venezuela.  But all options are on the table.

Up to this point, while other international bodies have acted, the United Nations and this Security Council have refused to act.  But now that nations across this hemisphere have spoken, the time has come for the United Nations to recognize Interim President Juan Guaidó as the legitimate President of Venezuela and seat his representative in this body.

This body should revoke the credentials of Venezuela’s representative to the United Nations, recognize Interim President Juan Guaidó, and seat the representative of the free Venezuelan government in this body without delay.

With all due respect, Mr. Ambassador, you shouldn’t be here.  You should return to Venezuela and tell Nicolás Maduro that his time is up.  It’s time for him to go.

There can be no bystanders to this history.  For the peace and security of our hemisphere, the world and the United Nations must stand with the people of Venezuela.

To that end, the United States is preparing a resolution recognizing the legitimacy of the government of Interim President Juan Guaidó.  And today, we urge every member of the Security Council and all U.N. member states to support this resolution.  Stand with the Venezuela people as they rise up to restore freedom, democracy, and libertad to their nation.  And this they are doing; they are rising up against intimidation and violence.  Even today, the people of Venezuela are taking to the streets to march for freedom.

But it’s time for the United Nations to act and for the world to stand with the people of Venezuela as they march to freedom.

History has taught us what happens when the civilized nations of the world allow oppression to go unchecked.  When a brutal dictatorship arose in Europe, the world failed to respond.  Millions of lives were lost in the Second World War.  This very institution was forged in the aftermath of that war so that nations around the world could come together and confront dictatorship with one voice.

And so the United States is calling on the United Nations to live up to its very purpose: Reject the failed leadership of Nicolás Maduro, and stand with us, stand with nations across the world and across this hemisphere to help the people of Venezuela forge a brighter future.

As President Trump has said, quote, “If the righteous many do not confront the wicked few, then evil will triumph.  When decent people and nations become bystanders to history, the forces of destruction only gather power and strength.”

So let us today rededicate ourselves to the mission upon which this body was founded: to maintain international peace and security.  And we have confidence that if we do that, if we make every effort to be at peace, that the God of peace will guide us and bless us, today, tomorrow, and always.

So thank you, Mr. President, for the honor of addressing you today.  May God bless the people of Venezuela.  And may God bless you all.