Home Home | News & Events | Remarks by U.S. Ambassador to the UN Nikki Haley at the Washington Conference on the Americas 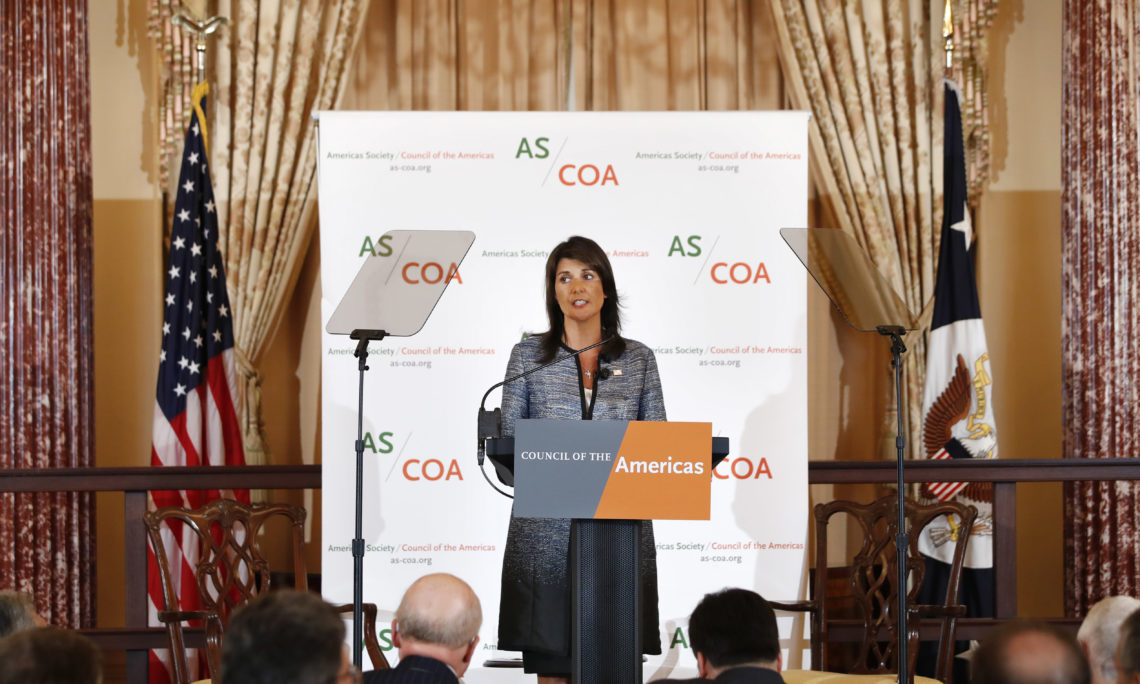 Ambassador to the United Nations Nikki Haley speaks about Venezuela to the Council of the Americas, during a luncheon at the State Department in Washington, Tuesday, May 8, 2018. (AP Photo/Jacquelyn Martin)

Council of the Americas Conference

Thank you. It really is great to be here with all of you today. I first want to thank Susan Segal and Eric Farnsworth with the Council of the Americas and, of course, I want to thank my esteemed predecessor, Ambassador John Negroponte.

I am here today because the Trump Administration places a high priority on the Western Hemisphere, its security, its prosperity, and its freedom. And we recognize that the United States must reassert our leadership in the hemisphere.

I have seen time and time again at the United Nations that when the United States fails to lead, we suffer, and the world suffers. This is even more true in our relationships with other nations. There is no substitute for strong U.S. leadership, based on our values of political and economic freedom and respect for human rights.

Among other things, we are each other’s largest and best trading partners. The United States sells more goods and services to our neighbors in the Western Hemisphere than we do to China, Japan, and India combined. While a lot of attention is placed on issues of trade with China, we should keep in mind that we trade nearly three times as much with the Western Hemisphere as we do with China.

We are also dependent on each other for our security.

Stopping drugs, gangs, and terrorists from crossing our borders begins with deterring threats before they reach the border.

And the principle that ties it all together is something else the United States has in common with most of our neighbors in the hemisphere – a commitment to freedom.

When he spoke to the Summit of the Americas in Peru last month, and again at the Organization of American States yesterday, Vice President Pence called the Western Hemisphere the “emisphere of freedom.” That’s a great description of the Americas. The western hemisphere is increasingly dominated by countries that share our political and economic principles.

The great human rights activist Natan Sharansky had a test for evaluating the freedom of societies that he called the “Town Square Test.” According to Sharansky, if someone can walk into a town square and express his or her views without being arrested, thrown in prison, or beaten, then they lived in a free society. If not, they lived in what he called a “fear society.”

As we look across the Americas, it’s pretty easy to tell the free societies from the fear societies. It’s a testament to the people of Latin America – and the love of freedom and dignity that exists in the human heart – that most of the hemisphere is free. As we know, it has not always been that way.

Several major countries in Latin America will hold free and open elections this year. This is a good and precious thing – a real reason for us to celebrate in the United States. Not because we will always agree with these governments. But because democracies respect the rule of law and the rights of their people.

And these are the preconditions for economic growth and hemispheric security.

Poverty, corruption, and violence continue to be challenges that all countries face.

The difference is how – or if – a government addresses those issues.

Across Latin America, the good news is that these challenges are increasingly dealt with through a commitment to the rule of law and democratic institutions. The region is far from perfection, but the progress is unmistakable.

There is one other country having what it calls “an election” in just a couple of weeks. But unlike the other elections I mentioned, the “voting” in Venezuela on May 20th is being done only to provide a phony cover for a dictator, not to determine the country’s legitimate leadership.

Venezuela’s economy and civil society has seen a cataclysmic decline under Chavez and Maduro. We have all seen the tragic suffering of the Venezuelan people.

In a region where 31 percent of the people are poor, a stunning 87 percent of Venezuelans live below the poverty line. A full 90 percent say they don’t know where their next meal is coming from. Venezuelans live in conditions today that they haven’t experienced in over 100 years.

Children are dying of malnutrition. Hospitals are without medicine and supplies. Once eradicated diseases are now reappearing. And the currency is next to worthless, with inflation rates of up to an unbelievable 18,000 percent.

The Venezuelan people no longer have a government. They are the unwilling victims of a criminal narco-state.

And it was only a matter of time before the Venezuelan crisis became a regional crisis. Now, the instability that began with the Chavez regime denying the economic and human rights of its people has spilled over Venezuela’s borders.

Today, the Maduro regime threatens the peace and security of the entire region. What has been described as the largest displacement of people in the region’s history is now taking place in Latin America.

Since 2014, the United Nations estimates that 1.5 million people have fled the poverty and violence in Venezuela. These desperate people are being received by neighboring countries, but they are straining city and state resources in Colombia, Brazil, Peru, and elsewhere.

This is a crisis that demands the attention of the entire world.

The last few years of European history have shown the potential for uncontrolled migratory flows to create political instability. Even relatively wealthy countries have experienced political and social backlash from trying to absorb large numbers of migrants. And Venezuela’s neighbors are not wealthy.

Colombia has taken in more than 600,000 Venezuelan migrants. Thousands more arrive each day, further straining a country that is struggling to implement its own peace agreement.

The Venezuelan crisis has created an immediate need for food, shelter, and medical assistance. The United States is helping. More countries must do so as well. But Venezuelan migrants, like those from Syria and other countries, want more than anything else to be able to go home.

And that makes the real core regional problem not a lack of resources, but the continued rule of the Maduro regime. As long as Maduro keeps the stores empty, the streets dangerous, and the government unaccountable, Venezuelans will not return home. And instability in the region will grow.

The implosion of Venezuela has also exposed another serious concern in Latin America: The government of Daniel Ortega in Nicaragua.

For a long time the Ortega government has looked less like a democracy and more like a dictatorship. The Maduro regime propped up Ortega with subsidized oil and other aid.

Venezuela’s self-destruction has ended that lifeline. And in the process it has exposed the rot at the core of the Nicaraguan government. Like his patron in Caracas and his mentors in Havana, the Ortega government has stayed in power by rigging elections, intimidating critics, and censoring the media.

In just the last month, the Nicaraguan people have found their voice after many years of corruption and misrule. It is the most serious threat to the Ortega government in a decade.

It began when students and others took to the streets to first protest the poor response to massive fires. It grew larger as protests against changes to the social security system. But it has become much more than that – protesting the very legitimacy of the oppressive government itself.

Police and pro-government mobs responded with lethal force. The government shut down independent radio and television stations. Over 60 people were killed or are still missing and hundreds were injured.

The images of the violence are horrific. One journalist was killed – shot in the head – while broadcasting live on Facebook. Another group of journalists described masked men breaking down the doors of their radio station and dousing the studio with gasoline. The thugs then fired into the gas and ignited the building.

Hundreds of thousands have demonstrated in response, demanding democratic reforms and calling for Ortega’s resignation. For the first time in many people’s lives, Nicaraguans are unafraid to openly express their desire for a real choice in determining their future, despite the very real threat of violence.

The United States calls on the Ortega government to make good on its offer to engage in a national dialogue. All sectors of Nicaraguan civil society – the business community, the students, and the Catholic Church, to name a few – must be included.

But talking is not enough. The real test will be whether the Ortega government will meet the people’s demands for democratic reforms and transparency.

As Natan Sharansky might say, Nicaragua is a “fear society” that yearns to be a “free society.”

The United States stands unequivocally with the people of Nicaragua in their demands for the same freedoms enjoyed by most of the rest of our hemisphere.

The people of Venezuela also hunger for the right to control their own destiny. But the time for talking – the time for urging the Maduro regime to open up to the voices of the people – is long passed in Venezuela.

The so-called elections that are scheduled to occur in 12 days are a sham. Maduro will not change. And to prove it, he is holding rigged elections to give his reign of terror the veneer of democracy. But he’s not fooling anyone.

We cannot allow Maduro to portray his “victory’ on May 20th as a validation of his rule. It will be nothing of the sort. As long as Maduro stops a credible, independent observer mission, we know the results will be fraudulent.

The systematic oppression of the Venezuelan people has become an active threat to the entire region.

For the safety and the security of all peoples in Latin America, it is time for Maduro to go.

When I traveled to Guatemala and Honduras earlier this year, I made a point of meeting with ordinary citizens, particularly women and girls. I do this in most countries I travel to. I find that it’s one of the best ways to get the measure of a country. The people I met were proud and hopeful – and no less deserving than you or me of the right to freedom and dignity.

Guatemala and Honduras face real challenges, but they are on the right track. This is what’s at stake in the Americas today.

At one point in time, there was a contest of ideas about forms of government in the Western Hemisphere. Today that contest is over.

The Cuban-Venezuelan-Nicaraguan model of socialism, dictatorship, corruption, and gross human rights violations has proved to be a complete and total failure. It has caused the suffering of millions of people.

The freedom model of democracy, economic growth, and human rights, is improving the lives of millions throughout the region.

There is much work left to do, but so much progress has been made. So many people have sacrificed so much.

We cannot allow the last, few surviving authoritarians to drag down the hemisphere. As neighbors, the United States and all the nations of Latin America are bound together on this journey.

If we stay true to our principles, I have no doubt we will succeed. And we will help ensure that the Western Hemisphere remains the hemisphere of freedom. Thank you.