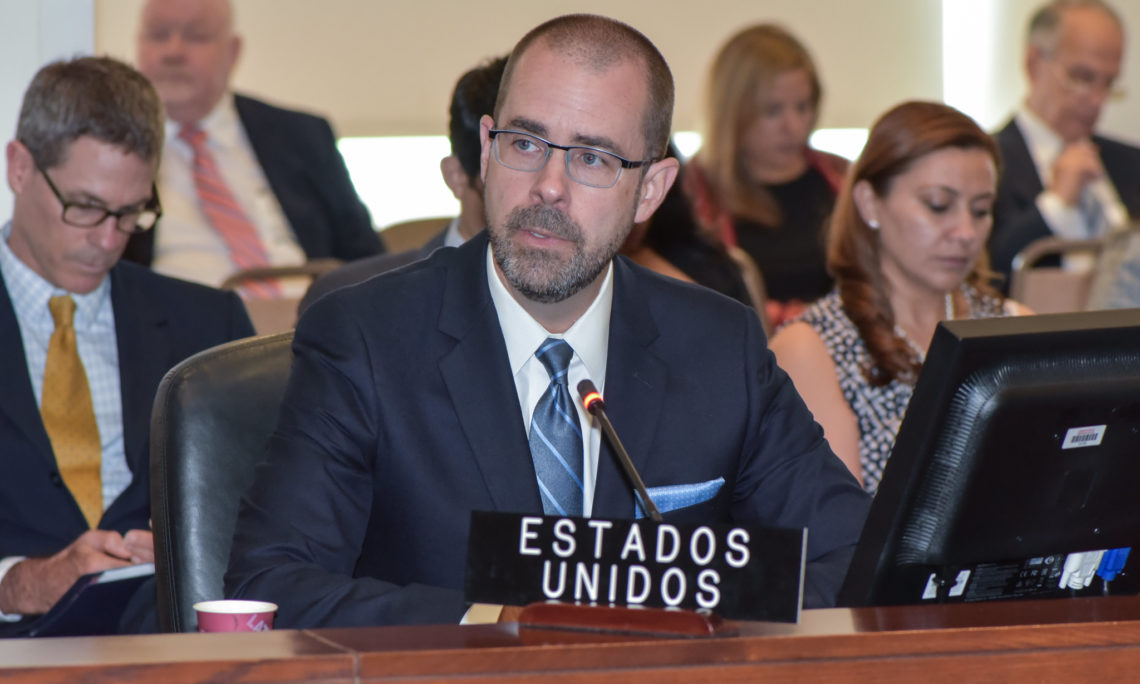 Distinguished Ambassadors, Representatives, and Secretary General Almagro – I want to thank the OAS for setting aside time to mark the first International Day Commemorating the Victims of Acts of Violence Based on Religion or Belief.

The International Day was a U.S. recommendation made in the Potomac Plan of Action after the first Ministerial to Advance Religious Freedom last year. Poland, during its UN Security Council membership, took this idea to the General Assembly and had this day established with the support of the United States and others.

The day is a moment when the international system can pause to remember the victims of acts of intolerance and violence around the world based on religion or belief, including against persons belonging to religious minorities, and to discuss how to stop the increasing number and intensity of such incidents.

The United States firmly believes that the global community needs to work together to defend the freedom of religion or belief, including here at the OAS. Religious freedom is essential for achieving peace and stability within nations and among nations. Religious freedom includes the right to hold any belief or none at all, to change faith, to meet for prayer or worship, to educate one’s children in the faith.

Where religious freedom is protected, other freedoms – like freedom of expression, association, and peaceful assembly – also flourish. Protections for the free exercise of religion contribute directly to political freedom, economic development, and the rule of law. Where it is absent, we find conflict, instability, and terrorism.

Recent reports by the Pew Forum found that 83% of the global population live in countries with high or very high restrictions placed on the free practice of religion by state or non-state actors.

It is because of these alarming trends that Secretary Pompeo convened two Ministerials to engage the international community about how to promote and protect religious freedom.

This year’s Ministerial reaffirmed international commitments to promote religious freedom for all and focused on concrete outcomes that can produce durable, positive change. A broad range of stakeholders, including over 100 governments and international organizations, and over 1000 members of civil society organizations and religious leaders attended to discuss challenges, identify concrete ways to combat religious persecution and discrimination, and promote greater respect for freedom of religion or belief.

We brought survivors who suffered persecution due to their religion or beliefs to the Ministerial to share their stories, to ground our discussions in the stark reality of persecution. To frame the summit, we launched the Ministerial at the U.S. Holocaust Memorial Museum, which serves as a stark reminder of the failure of the international community to protect Jews from the horrors of genocide resulting in millions murdered for their faith and religious identity.

And as much as we want to view the Museum as a history lesson, something disconnected from our reality today, we cannot. Persecution based on religion or belief continues. It continues today. Religious persecution is as old as human history. But it is not only history. For many faith communities, never again is happening again. The survivors we brought to the Ministerial, and the thousands and thousands of people we remember today, are evidence of this truth — that the religious persecution we hoped was a thing of the past still exists.

It is fitting that our countries of the Western Hemisphere mark this day, as thankfully religious freedom is a right recognized by OAS member states in the American Declaration on the Rights and Duties of Man, the American Convention on Human Rights, and in our respective constitutions. None of our countries are perfect on this issue, and we should all strive to ensure better respect for religious freedom. Yet we can be proud that in our hemisphere there are no extreme examples of persecution of victims based on their religion or belief that we see in too many places around the world, especially like in China and Iran.

In the United States, we like to say religious freedom is an American value. But as religious freedom is respected throughout the hemisphere, we can also say it is a value of the Americas.  And as an extension of these shared values, we all have a role to play outside of our region as well.

This is an issue where the Americas, and indeed, the OAS, can be a model for the world. Colleagues, as I have learned from my own travels around the globe, many people look to our hemisphere for guidance and hope as they consider how to improve their domestic situations. This is one reason why it is so important for us to champion freedom of religion vocally within the inter-American system and to work together to press China, Iran, Burma, Russia, Pakistan, and others to reform.

Thanks to Canada’s leadership, we co-chair with them the International Contact Group for Freedom of Religion or Belief, which for the past five years has started to bring together likeminded countries from around the world and our hemisphere to advocate for religious freedom together.

Our hemispheric commitment to promote religious freedom and protect victims of persecution was on full display at the OAS General Assembly in Medellin in June. The United States introduced and many countries cosponsored a new section in the “Promotion and Protection of Human Rights” omnibus on the “Right to Freedom of Religion or Belief” that passed unanimously.

The resolution tasked the General Secretariat to organize a regional dialogue on the right to freedom of religion or belief, to be supported with input from member states and the Inter-American Commission for Human Rights. It also requested the Committee on Juridical and Political Affairs to organize, within existing resources, a special meeting where member states may share lessons learned and exchange best practices to advance the goals of this resolution.

During our recent Ministerial last month, which many of your countries participated in, as well as the Secretary General, several countries announced their intention to host regional follow-on conferences. I would like to thank Colombia for its leadership in offering to convene the first regional event in the Americas in the first quarter of 2020.  This will offer an important forum in our hemisphere to build on the outcomes from the Ministerial and further coordinate efforts to promote and protect religious freedom in our region.

In closing, to meet the challenge of religious persecution in the 21st century, each one of our countries needs to find new ways to protect and to promote religious freedom for all. Religious freedom is in our collective DNA.  Let us take the best examples of the Americas and share them with other countries and organizations, and encourage them to do better.  I look forward to our continued collaboration towards these important goals.