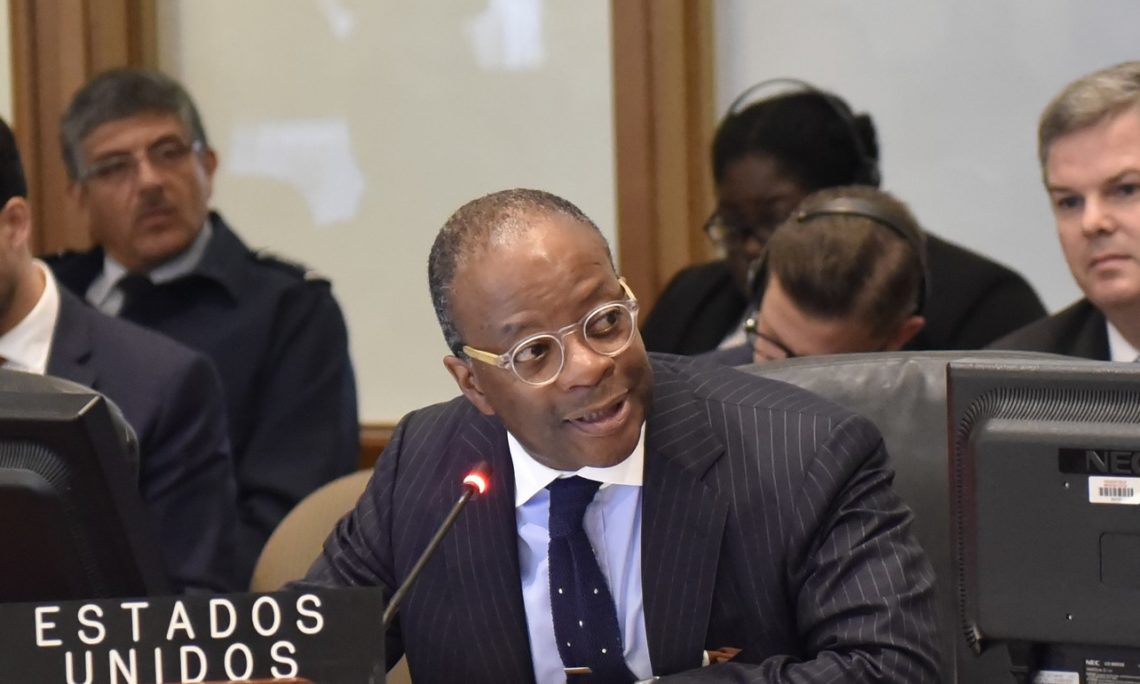 Thank you Madam Chair for convening another Special Session of this Council. Our Organization has a responsibility to respond to the rapidly deteriorating situation in Nicaragua.

Madam Chair, the situation continues to worsen by the day. This despite the growing international condemnation of the ongoing, government-sanctioned violence and intimidation campaign against the Nicaraguan people.

The United States condemns in the strongest possible terms the ongoing attacks by President Daniel Ortega’s para-police forces against university students, journalists, and clergy across the country — in addition to the arbitrary detention of Civic Alliance leadership and threats against those who support them.

Vice President Mike Pence tweeted on July 24 that “State-sponsored violence in Nicaragua is undeniable.” One local human rights group last week put the number killed since the violence began just three months ago at a staggering 448. Further, the government has now begun to use the new anti-terrorism law to arrest its critics.

So we meet again today to advance our strong commitment to work together to assist Nicaragua overcome an increasingly dire situation.

This body must be ready to support effective and proactive engagement, Madam Chair and fellow colleagues. Now more than ever, the world’s eyes are focused on how the OAS responds to the crisis in Nicaragua.

We took an important step forward in the resolution adopted overwhelmingly by this Council on July 18.

That resolution condemned ongoing “violence, repression and human rights violations committed by police, para-police groups and others” in Nicaragua; urged full stakeholder participation in the National Dialogue; and supported the monitoring and investigative work of the Inter-American Commission on Human Rights (IACHR) in Nicaragua.

Today, we are taking the next step by organizing more intensive oversight of multifaceted OAS efforts, to ensure that they remain responsive to the situation on the ground in Nicaragua

The text now before us reaffirms that we are committed to working together on a grave matter of concern — as members of this Organization, as friends of the Nicaraguan people, and in solidarity with their democracy

We strongly agree with the text’s creation of a special committee of OAS Member States to help provide support and leadership to the ongoing and critical work of this Organization with respect to Nicaragua.

Madam Chair, only a strong, internationally-backed mechanism as envisioned here can help prevent a further escalation of violence there and create better conditions for Nicaragua-led solutions

Madam Chair, despite the Nicaraguan government’s cynical efforts to disguise the truth, we know that ongoing violence and repression is being perpetrated by government forces and government supporters. They are attacking religious leaders, including those whom the government earlier invited to mediate the current conflict, as well as students and other ordinary citizens exercising their right to protest.

We know this because the Inter-American Human Rights Commission on the ground has documented this reality in great detail — based on eyewitness accounts and recordings.

Church leaders, independent media and other credible observers, including many of our own diplomatic missions, have also confirmed this grim reality.

Madam Chair, last week at the Ministerial to Advance International Religious Freedom here in Washington, Vice President Pence stated that the Ortega government is “virtually waging war on the Catholic Church.” As those of you who attended the Ministerial know, Father Zamora attended and spoke about the recent armed attack on his church where more than 200 students sought shelter.

With these experiences in mind, Madam Chair, we must express quite clearly and directly that violators and abusers of human rights must be held accountable.

As member states, we must reaffirm our full support for continued engagement and monitoring on the part of the OAS and its relevant entities, including the Inter American Commission

The United States believes the National Dialogue, established with the mediation of the Nicaraguan Council of Bishops, offers an invaluable opportunity to agree on steps that will advance peace and respect the will of the Nicaraguan people. with this in mind, the United States continues to support the proposal for early, free, fair, and transparent elections made by Nicaragua’s broad-based Civic Alliance, as part of the National Dialogue process.

Early elections represent the only viable path back to democracy and full respect for human rights in Nicaragua. The OAS has an important role to play in this regard if there is political will on the part of the Ortega government to implement the recommendations of the 2017 OAS electoral mission.

The United States will continue to work with the international community and other partners in support of the Nicaraguan people.

The Special Committee called for in our proposed resolution will offer Member States a flexible, agile mechanism that facilitates coordination with other international organizations, including the United Nations and SICA, as well as among various elements of the OAS itself.

Madam Chair, it is for this reason that we urge the Council to adopt immediately the resolution before us.

This action will ensure that we, as member states, are well placed to support inclusive dialogue and proactive OAS engagement, and do our part to prevent further violence.

Such action is fully in line with the commitments all of us have freely undertaken as OAS member states.