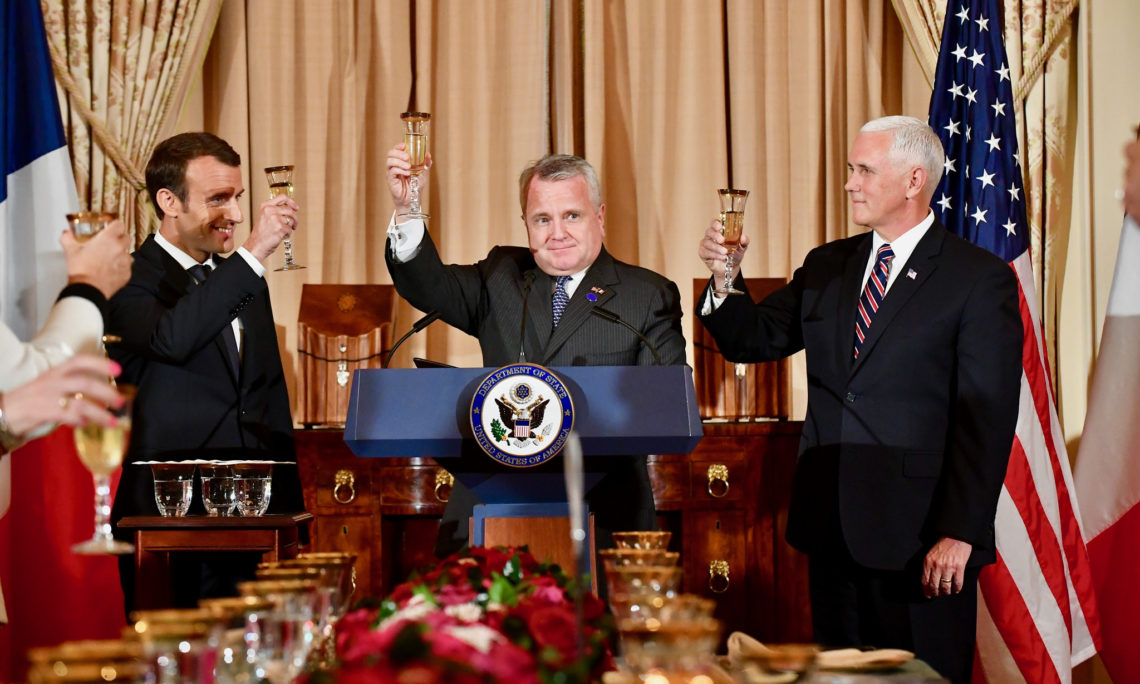 Acting Secretary of State John Sullivan flanked by Vice President Mike Pence and French President Emmanuel Macron toasts the U.S.- France relationship during the state luncheon at the U.S. Department of State in Washington, D.C. on April 24, 2018. France is an OAS Permanent Observer.

Remarks at a State Luncheon in Honor of French President Emmanuel Macron and Mrs. Macron

ACTING SECRETARY SULLIVAN: Well, thank you. Good afternoon, everyone. I’m honored to join Vice President Pence in welcoming President Emmanuel Macron and his wife Brigitte to the State Department. Bienvenue. It’s fitting that we meet here today in the Benjamin Franklin Room, where we have welcomed many French presidents and diplomats in the past, and for good reason: Benjamin Franklin was a central part of our two countries’ diplomatic relationship. As the United States’ first ambassador to France appointed 240 years ago, he was instrumental in establishing with France our young republic’s first treaty alliance. From the very beginning of our nation’s history, the United States and France have shared deep and abiding friendship built on our foundational commitment to the defense of liberty in our own countries and around the world.President Macron, your visit today offers an opportunity to deepen this historic relationship at a time when it has never been more important. Today, the United States and France are together addressing global security challenges and supporting the democratic aspirations of people across the globe as well as taking a firm, unapologetic stand against regimes that use despicable means like chemical weapons against their own people. Creating a more secure and prosperous future for ourselves, for our children, for our grandchildren requires steadfast and willing partners. We are so grateful for President Macron. He is that partner and that leader.

Fortunately, our countries also benefit from longstanding commercial and educational ties. Our economic relationship is robust and growing with more than $1 billion in daily bilateral commercial transactions. And our education and cultural exchange programs serve as a foundation for fostering the deep people-to-people ties that bind the United States and France so closely. We are proud that the hallmark educational program between our two countries, the U.S.-France Fulbright, is one of the oldest and largest in Europe. The program just celebrated 70 years of engagement and has provided 20,000 American and French students with the opportunity to study, teach, or conduct research in each other’s country.

Of course, we know that our partnership is not just about the past; it’s about the future. We look forward to working with President Macron to address the global challenges that lie ahead.

With no further ado, please join me in a toast.

To President Macron and to the people of France, may our alliance grow ever stronger and more dynamic over the next 240 years and beyond. A votre sante.

And now it’s my great honor to introduce the Vice President of the United States, Mike Pence. (Applause.)

PRESIDENT MACRON: (Via interpreter) Mr. Vice President, Madam Pence, Secretary of State, Madam Rodriguez, members of the American Congress and of the French parliament, ladies and gentlemen, it is, for Brigitte and myself, an immense honor, as well as for the whole of our delegation, to be together with you today in this temple of American diplomacy, a diplomacy which has for a long time been close to France. You both reminded us, Mr. Vice President and Secretary of State – reminded us of the deepness of our bonds, as illustrated by our contact with President Trump since we arrived yesterday.

We’ve always been there for one another. When it was about building a new, free country, some young Frenchmen came to support it because they’d found about the values of the United States. When on both sides of the oceans it was about defending that freedom, you joined us on the occasion of the First as well as the Second World War, where you stood with us to defend our values and this joint destiny. And all along these centuries, your diplomacy – and I apologize to the military present here; our defense is great because our diplomacy is great, and they strengthen each other. Your diplomacy has constantly been working with ours in order to build a coherent approach of the world.

In this place, some major events for our modern peace have been prepared for or agreed upon, and this is in particular based on the friendship between our two countries, which has contributed to forging this Western world based on democracy, the freedom of individuals, and enabled us to build the international order that we know. It is based upon a balance, always fragile because it relies on the powers and counter-powers and what each and every one does, but it is an indispensable balance for the world. An economic, financial, political order has been put together after the Second World War. Is it perfect? Probably not. Can it be improved? Definitely. Have we seen anything better? I do not think so. This order that we built, which your diplomacy contributed to, is the one which is in the name of all values from the United Nations to the IMF and the World Trade Organization. And thanks to all of the international organizations we’ve put together, this order enables us to enjoy the framework for our cooperation and for defending our values, and this is what we’re here to defend today.

I will talk about it further tomorrow when I take the floor before the Congress. It is an honor for France, and I shall thank your country and President Trump for that. And I will say it once again: I believe in a modern multilateralism, a strong one which knows how to be respected, how to build peace, foster peace, and foster jobs as well. It’s not about endless regulations. Neither it is about a new framework within which we would give up on the values, on everything we’ve taken so much time to build. So in this place, which is so important for the history of your country as well as the history of our relationship. I’m well aware that I’m talking to leaders in a place where a lot of our future will be decided.

I also would like to say a few words about our economic relations. Today you’re here with as many men and women who very much are in charge thanks to their investments of our economic bonds. And the United States of America, as a matter of fact, is the first foreign investor in France. And it is also the first country where French businesses invest. In total, it is $100 billion in goods and services that we exchange every year.

It is therefore a relationship based upon the strength of our economic relation. Because there’s always something more than the economy between our two countries, because it is a vision of the world, our values, our joint ambition. From distribution to finance, the energy sector, the defense sector, research, education, scientific cooperation, we have these strong bonds. Over the past few months, we implemented on both sides of the ocean some major reforms, which have brought about some new momentum to these exchanges. Since 2017, the United States is once again the first source of foreign investment in France, and I’m very pleased about it and would like it to continue.

And I’m very pleased that some of you have, over the past few weeks and even today, have announced some huge investments in France in the field of tourism or the media, intelligence, artificial – artificial intelligence, the financial sector, the pharmaceutical sector as well, and I would like us to continue to work to that end. Investments – investing in a business, investing in human capital through education and training.

This is absolutely indispensable for us to succeed. In France, we will continue to implement reforms and to transform the country in order to make it even more competitive, so that within the European Union, we can shoulder all of our responsibilities and support the necessary reforms in the coming month and continue in education, in culture, in research, and in the business sector, continue to be the leader that we are. In order to be – continue to be this counterpart that we’ve been to the United States for a long time.

Of course, it is about creating new jobs for our peoples, in particular, our middle classes. It is about also facing up to the coming challenges: the energy transformation as well as the digital transformation. Everything that will be required in terms of intelligence – artificial intelligence, the changes that it will bring about, ability to attract talents. And we will have to work to make sure that it is still possible because we know how to defend this peace that we cherish together. And be it about the international order or the economic order we believe in, we can only keep them if we constantly reinvent them by managing to convince, on a daily basis, our fellow citizens that this is the right thing for them. There can be no success detrimental to our peoples. And I know that we cannot succeed without protecting and continuing to cherish our values. This is against this background that we will face up to the challenges ahead of us, be they political or economic.

But I’m aware that in this city, and together with you, secretary of state, Mr. Vice President, and together with President Trump, we have reliable allies. We have one historical ally, which means that any disagreement we may all have at some point in time will not overcome the strength of history, the weight of our duty and the values that we’ve been sharing.