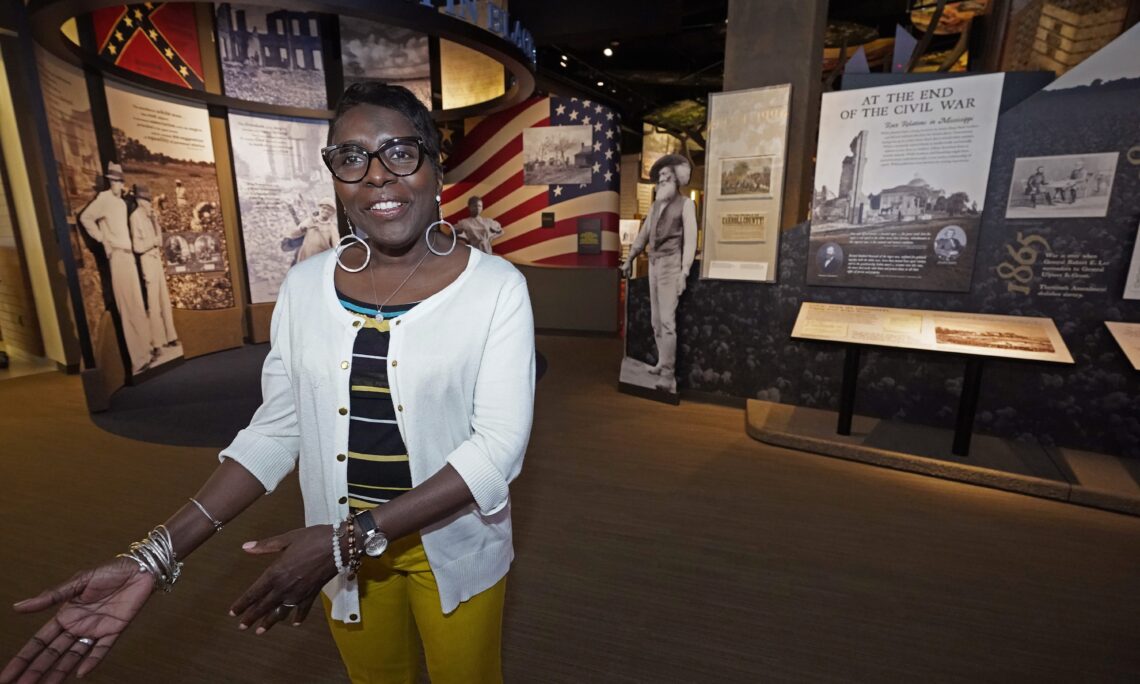 Pamela Junior, director of The Two Mississippi Museums, speaks about the historical roots of Juneteenth, as she stands before the entrance exhibits to the Mississippi Civil Rights Museum, Thursday, June 16, 2022, in Jackson. (AP)

After the Union Army captured New Orleans in 1862, slave owners in Confederate states migrated to Texas with more than 150,000 enslaved Black persons.  For 3 years, even after President Abraham Lincoln issued the Emancipation Proclamation, enslaved Black Americans in Texas remained in brutal bondage, immorally and illegally deprived of their freedom and basic dignity.  On June 19, 1865 — over 2 years after President Lincoln declared all enslaved persons free — Major General Gordon Granger and Union Army troops marched to Galveston, Texas, to enforce the Emancipation Proclamation and free the last enslaved Black Americans in Texas.

Those who were freed from bondage celebrated their long-overdue emancipation on June 19.  Today, our Nation commemorates Juneteenth:  a chance to celebrate human freedom, reflect on the grievous and ongoing legacy of slavery, and rededicate ourselves to rooting out the systemic racism that continues to plague our society as we strive to deliver the full promise of America to every American.

This Juneteenth, we are freshly reminded that the poisonous ideology of racism has not yet been defeated — it only hides.  Our Nation continues to mourn the 10 lives senselessly taken in Buffalo, New York, and grieve for the families who have lost a piece of their soul.  As we confront the awful reality of yet another gunman massacring innocent people in the name of hatred, racism, and fear, we must meet this moment with renewed resolve.  We must stand together against white supremacy and show that bigotry and hate have no safe harbor in America.

Juneteenth is a day to reflect on both bondage and freedom — a day of both pain and purpose.  It is, in equal measure, a remembrance of both the long, hard night of slavery and subjugation, as well as a celebration of the promise of a brighter morning to come.  On Juneteenth, we remember our extraordinary capacity to heal, to hope, and to emerge from our worst moments as a stronger, freer, and more just Nation.  It is also a day to celebrate the power and resilience of Black Americans, who have endured generations of oppression in the ongoing journey toward equal justice, equal dignity, equal rights, and equal opportunity in America.

Last year, I was proud to sign bipartisan legislation establishing Juneteenth as our newest Federal holiday, so that all Americans can feel the power of this day, learn from our history, celebrate our progress, and recognize and engage in the work that continues.  Great nations do not ignore their most painful moments — they face them.  We grow stronger as a country when we honestly confront our past injustices, including the profound suffering and injustice wrought by slavery and generations of segregation and discrimination against Black Americans.  To heal, we must remember.  We must never rest until the promise of our Nation is made real for all Americans.

The emancipation of enslaved Black Americans was not the end of our Nation’s work to deliver on the promise of equality — it was only the beginning.  On Juneteenth, we recommit to our shared work to ensure racial justice, equity, and equality in America.  We commemorate the centuries of struggle and progress led by abolitionists, educators, civil rights advocates, lawyers, activists, trade unionists, religious leaders, public officials, and everyday Americans who have brought our Nation closer to fulfilling its promise.

As my good friend, the late Congressman Elijah Cummings, said, “Our children are the living messengers we send to a future we will never see.”  Together as a Nation, let us continue our work together to build a country we are all proud to pass along to our children — one where the foundational promises and ideals of America ring true for every child and every family.

NOW, THEREFORE, I, JOSEPH R. BIDEN JR., President of the United States of America, by virtue of the authority vested in me by the Constitution and the laws of the United States, do hereby proclaim June 19, 2022, as Juneteenth Day of Observance.  I call upon the people of the United States to acknowledge and condemn the history of slavery in our Nation and recognize how the impact of America’s original sin remains.  I call on every American to celebrate the emancipation of all Black Americans and commit together to eradicate systemic racism and inequity that can never be tolerated and must always be fought against.

IN WITNESS WHEREOF, I have hereunto set my hand this seventeenth day of June, in the year of our Lord two thousand twenty-two, and of the Independence of the United States of America the two hundred and forty-sixth.