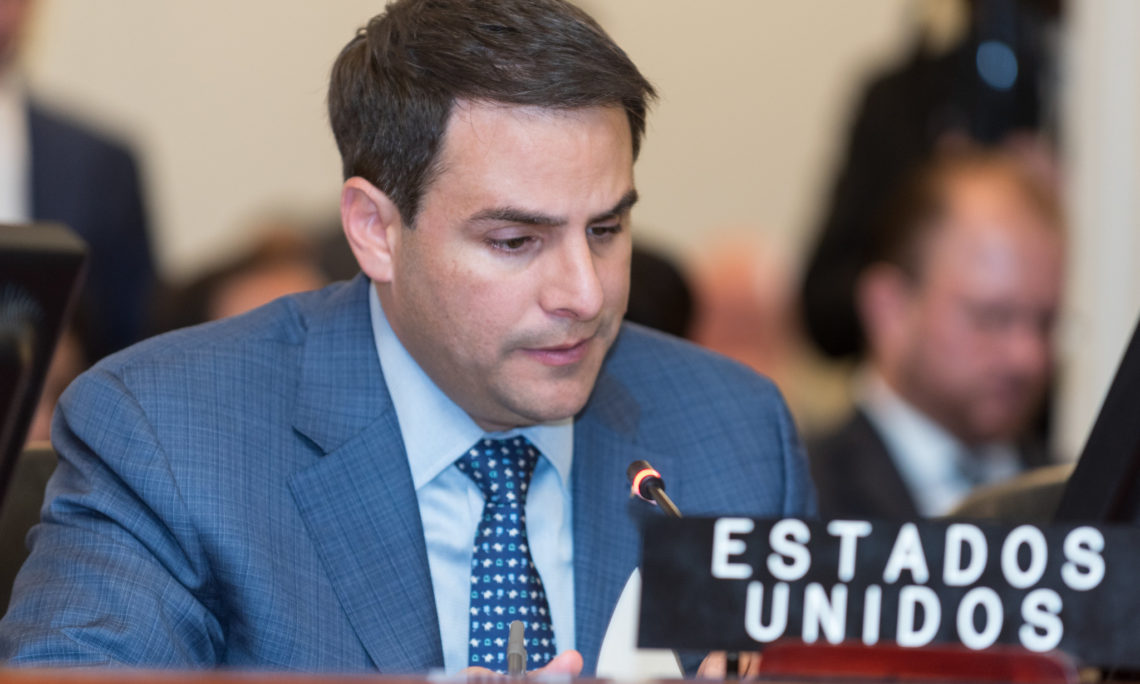 Ambassador Carlos Trujillo, Permanent Representative of the United States, addresses the special session of the Permanent Council on the report of the OAS High Level Commission on Nicaragua, November 25, 2019.

Mr. Chair, Mr. Secretary General: the OAS and the OAS Member States have been enormously patient in pressing the Ortega regime to meet its commitments under the Inter-American Democratic Charter — and its promises to the opposition Civic Alliance to conduct effective dialogue and restore democratic governance.

We would like to thank the members of the High Level Commission for their work, and for the presentation of the Commission’s final report today. We also thank today’s presenters for their testimonies.

Building on the important efforts of the OAS Nicaragua Working Group, the Commission held several meetings with civil society, victims, and various experts — here in Washington and also in El Salvador.

Mr. Chair, we also want to recall that the OAS has held multiple Permanent Council meetings over the past year, heard reports from Secretary General Almagro, the Inter-American Commission for Human Rights, and outside legal experts. We all have heard exhaustive expert testimony.

Despite such efforts, the Nicaraguan Government refuses any meaningful cooperation with OAS bodies, stonewalling requests from the Working Group and the High Level Commission.

In fact, at no time has the Nicaraguan government or its defenders ever offered any independent expert to deny the mountain of evidence accumulated through the Working Group, the MESENI, the Interdisciplinary Group of Independent Experts, or the Permanent Council. Instead, it has only replied with uncorroborated, political rhetoric aiming to mislead the international community.

The United States continues to hope for a political solution through dialogue, but the Ortega government balks at every turn, lacking good faith while cynically playing for time and hoping for continued regional distractions.

Colleagues, although we all may hope for and support dialogue, we must be realistic about what is happening in Nicaragua.

The United States condemns in the strongest possible terms the detention of 16 Nicaraguans delivering humanitarian assistance to hunger-striking mothers of political prisoners in Masaya.

Instead of fulfilling its commitments to unconditionally release all political prisoners, the Ortega regime has detained more of its citizens solely for attempting to provide life-saving water to peaceful protesters. This is just the latest example of the ongoing campaign of repression and human rights abuses perpetrated by the Ortega regime.

The United States calls on the regime to immediately and unconditionally release all individuals arbitrarily detained. It is also well past time for the Ortega regime to release the more than 130 political prisoners it continues to hold, contrary to its commitments made under the national dialogue.

It also is time for this Council to respond to the government of Nicaragua’s violations of the essential elements of democracy, as articulated in the Inter-American Democratic Charter.

No one should be fooled by the Ortega regime’s maneuvers to unilaterally impose cosmetic changes to the electoral system. Only through dialogue with legitimate representatives of Nicaragua’s civic opposition can credible, consensual reform be achieved.

Mr. Chair, as was made very clear today, the OAS needs to act expeditiously on the declaration by the High-Level Commission that the Constitutional Order in Nicaragua has been unconstitutionally altered in a manner that seriously impairs democratic order.

The government of Nicaragua’s lack of respect for the rule of law, due process, transparency, and human rights and fundamental freedoms impedes any good faith efforts at dialogue and reconciliation.

Quite simply — the Ortega regime’s repression and dismantling of democracy in Nicaragua must cease immediately. The regime needs to heed Nicaraguans’ call for early, free, and fair elections and restore human rights and fundamental freedoms.

However, the Nicaraguan government has made clear that it is not willing to engage in good faith with opposition representatives in negotiations on a political solution.

We must now acknowledge that enhanced and stronger diplomatic pressure is required for the Ortega government to negotiate seriously.

We all want a restoration of democracy in Nicaragua, and the United States trusts that the findings and recommendations of the High Level Commission provide us with the basis to convene a Special General Assembly to consider next steps.

Given the worsening crisis in Nicaragua, we can do no less than keep all Inter-American options open.

This is because the OAS, the organization most firmly committed to the defense of democracy in the Western Hemisphere, must support the people of Nicaragua.

For our part, the United States will continue to promote accountability for the regime’s corruption and human rights violations and abuses. We hope the OAS as an institution will do the same.