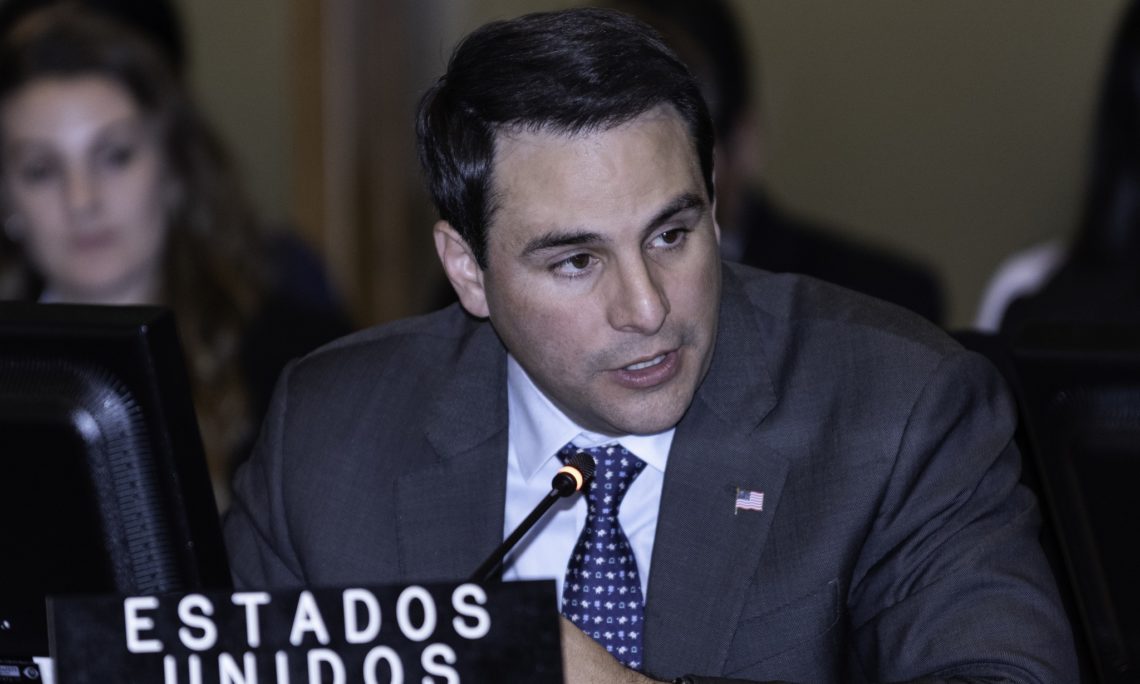 On January 10, 2019, the OAS Permanent Council approved a resolution to not recognize the Nicolas Maduro dictatorship. The measure was adopted with 19 votes in favor, 6 against, 8 abstentions and one absent. Ambassador Carlos Trujillo addressed the Council.

Mr. Chairman, today is a critical day for those striving to preserve the little that remains of democracy in Venezuela, and for the credibility of the OAS. Today’s sham Presidential inauguration, achieved through a fraudulent election, is another decisive step away from democracy and toward dictatorship by a regime that has repeatedly and wantonly undermined democratic institutions and violated human rights. Today was also a critical test for the OAS, to seize this opportunity to act in defense of democracy and human rights in Venezuela.

On June 5, 2018, the OAS General Assembly passed a resolution stating that the May 20, 2018 Presidential election – the basis for the sham inauguration today – failed to comply (even minimally) with international standards, and therefore lacked basic legitimacy. We here all know it was an undemocratic sham by any standard.

Moreover, in its June resolution the OAS General Assembly urged restoration of the full authority of the democratically elected National Assembly, and pressed the Venezuelan government to allow the entry of humanitarian aid to prevent a spreading humanitarian and public health crisis. It also identified increased migration of Venezuelans fleeing the economic and political collapse of Venezuela. The General Assembly called upon OAS member states to implement measures to help restore democratic order in Venezuela, and pledged to apply the letter and spirt of the Inter-American Democratic Charter for the defense and preservation of democracy in Venezuela.

Mr. Chairman, it has been six months since the OAS approved that resolution. Has the situation improved? Has progress been made? Can any member state point to anything that the Maduro regime has done to comply with OAS resolutions? Has the Maduro regime done anything to restore democracy or protect human rights?

In fact, as we all know, and as we have all discussed many times in various OAS bodies including this one, the opposite is true. The Maduro regime has only stepped up its attack on democratic institutions and deepened its repression of democratic actors. Do democratic governments throw their rivals out of 10th floor windows, use food as a weapon against their own populations, and hold sham elections that are fixed in advance in their own favor?

Meanwhile, not coincidentally, the humanitarian crisis has gotten dramatically worse. Can any member state cite any credible reason for which the OAS should refrain from acting responsibly in defense of democracy in Venezuela now? If there was room for legitimate debate before, there is none now. Not anymore. Nicolas Maduro’s inauguration is an undemocratic sham, and the OAS Permanent Council should take decisive note of this fact here and now.

Mr. Chairman, this brings me to our second, perhaps equally important question. Is the OAS serious about protecting democracy and human rights? Is it consequential in carrying out its most fundamental responsibilities? The current circumstance is shaping up as a decisive test case.

I congratulate the member states of the OAS who stood up for our values and principles in defense of democracy and the protection of human rights. Failure to recognize the situation in Venezuela for what it is not a legitimate option. The facts of the case are unambiguous and glaringly clear. The credibility of the OAS is at stake.

We thank those member states that stood on the side of democracy and human rights.  As Secretary of State Pompeo has stated: “It is time for Venezuelan leaders to make a choice. We urge those who support this regime, from every day employees getting by on food subsidies to the Venezuelan security forces sworn to support the constitution, to stop enabling repression and corruption and to work with the National Assembly and its duly elected leader, Juan Guaido, in accordance with your constitution on a peaceful return to democracy. The Venezuelan people and the international community will remember and judge your actions. Now is the time to convince the Maduro dictatorship that the moment has arrived for democracy to return to Venezuela.”

Following is the complete text of the resolution:

RESOLUTION ON THE SITUATION IN VENEZUELA

(Adopted by the Permanent Council at its special meeting held on January 10, 2019)

REAFFIRMING the right of the peoples of the Americas to democracy and the obligation of their governments to promote and defend it as reflected in Article 1 of the Inter-American Democratic Charter,

RECALLING that, through resolution AG/RES. 2929 (XLVIII-O/18) of June 5, 2018, the General Assembly declared that the May 20, 2018 electoral process in Venezuela lacked legitimacy for not having met the participation of all Venezuelan political actors, its failure to comply with international standards, and for being carried out without the necessary guarantees for a free, fair, transparent, and democratic process,

CONSIDERING that the 2019-2025 presidential period beginning in Venezuela on the 10th of January of 2019 is the result of an illegitimate electoral process,

UNDERSCORING the constitutional authority of the democratically elected National Assembly.

REITEREITING ITS DEEP CONCERN about the worsening political, economic, social and humanitarian crisis in Venezuela resulting from the breakdown of democratic order and serious human rights violations in that state, and the government of Venezuela’s negligence to meet the fundamental Inter-American standards of human rights and democracy;

RECOGNIZING that, as a consequence, a significant number of Venezuelans are being forced to flee the country because their basic needs have not been met.

REITEREITING its serious concern about the collapse of Venezuela’s health-care system, which has led to a reemergence of previously eradicated infectious diseases across Venezuela and into neighboring countries and the wider region.

NOTING that the exodus of Venezuelans is having an impact on the capacity of countries in the region to meet their humanitarian needs and poses challenges to public health and security.

TAKING NOTE, in this regard, of the Quito Declaration on the human mobility of Venezuelan citizens in the region, of September 4th 2018, and its Plan of Action adopted on November 23rd 2018.

CONDEMNING in the strongest terms the arbitrary detentions, lack of due process and the violation of other human rights of political prisoners by the Government of Venezuela.

UNDERSCORING that the Permanent Council and the Meeting of Consultation of Foreign Ministers remain ready to engage in diplomatic initiatives, including good offices, aimed at promoting dialogue in Venezuela, with a view to arriving at a political solution to the crisis in that country.

To not recognize the legitimacy of Nicolas Maduro’s new term as of the 10th of January of 2019.

To reaffirm that only through a national dialogue with the participation of all Venezuelan political actors and stakeholders can national reconciliation be achieved and the necessary conditions agreed upon for holding a new electoral process that truly reflects the will of the Venezuelan citizens and peacefully resolves the current crisis in that country.

To urge all Members States and invite Permanent Observers of the OAS to adopt, in accordance with international law and their national legislation, diplomatic, political, economic and financial measures that they consider appropriate, to contribute to the prompt restoration of the democratic order of Venezuela.

To call for new Presidential elections with all necessary guarantees of a free, fair, transparent, and legitimate process to be held at an early date attended by international observers.

To invite Member States and Permanent Observers to implement measures to address the humanitarian crisis in Venezuela and impacted countries, through the support to appropriate international and regional organizations.

To urge the Venezuelan regime to allow the immediate entry of humanitarian aid to the people in Venezuela, including epidemiological surveillance, to prevent the aggravation of the humanitarian and public health crisis, particularly against the reappearance and propagation of diseases.

To demand the immediate and unconditional release of all political prisoners.

To express the Organization’s ongoing solidarity with the Venezuelan people and its commitment to remain seized of the situation in Venezuela and to support diplomatic measures that facilitate the restoration of democratic institutions and the full respect for human rights.