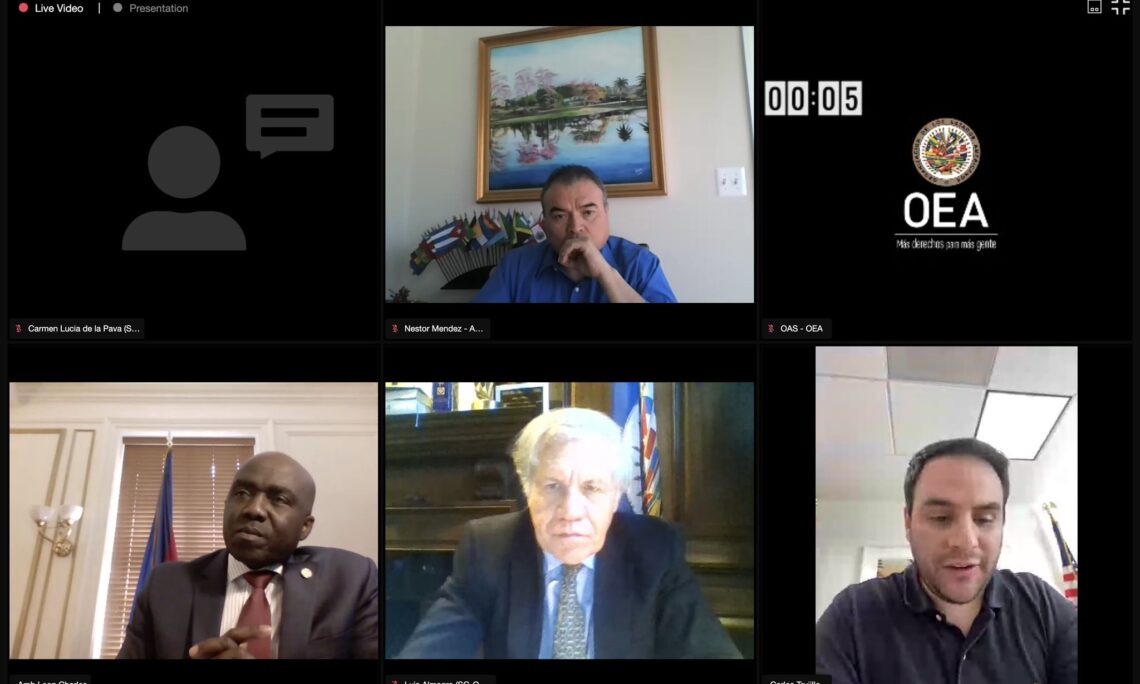 Mr. Chairman, Mr. Secretary General: the OAS and the OAS Member States have been enormously patient in waiting for the Ortega regime to meet its basic commitments under the Inter-American Democratic Charter — and its promises to the opposition Civic Alliance to conduct effective dialogue and restore democratic governance.

The OAS has held multiple Permanent Council meetings, heard reports from our Secretary General, the Inter-American Commission on Human Rights, the Nicaragua Working Group, the OAS High Level Commission, and outside legal experts.

We all have heard about exhaustive efforts to try to engage and dialogue with the Nicaraguan government.

However, despite such efforts, the Nicaraguan Government refuses any meaningful cooperation with OAS bodies.

Instead, the government continues its approach of replying to concerns and criticism with uncorroborated, political rhetoric aiming to mislead the international community, while silencing independent journalism and civil society that seek to tell the truth, and firing health care workers who advocate stronger measures to protect against the pandemic.

The United States continues to support a political solution through dialogue, but the Ortega government keeps playing for time and hoping for continued distractions.

Colleagues, although we all may hope for dialogue, we must be realistic about what is happening in Nicaragua.

Instead of fulfilling its commitments to release all political prisoners unconditionally, the Ortega regime continues to threaten, harass, and detain more of its citizens.

Rather than take responsible measures to protect its citizens from COVID-19, the regime organized mass gatherings that facilitated its spread and then prohibited medical workers from using personal protective equipment.

These are just the latest examples of the ongoing campaign of repression and human rights abuses perpetrated by the Ortega regime.

The United States calls on the regime to release all individuals arbitrarily detained immediately and unconditionally. It is well past time for the Ortega regime to release the 86 political prisoners it continues to hold.

Mr. Chair, it also is time for this Council to respond to the government of Nicaragua’s blatant violations of the essential elements of democracy, as articulated in the Inter-American Democratic Charter. This has been affirmed by the High Level Commission, as well as by the Secretary General again today.

No one should be fooled by the Ortega regime’s eventual maneuvers to impose cosmetic changes to the electoral system. Only through an agreement with legitimate representatives of Nicaragua’s civic opposition can credible reform be achieved and Nicaraguans’ confidence in their democratic process restored.

Mr. Chairman, the OAS needs to act on the determination by the High Level Commission that the Constitutional Order in Nicaragua has been unconstitutionally altered in a manner that seriously impairs democratic order.

The government of Nicaragua’s lack of respect for the rule of law, due process, transparency, its own citizens’ health, human rights, and fundamental freedoms has impeded all efforts at dialogue and reconciliation.

Let me be very clear – the regime needs to heed Nicaraguans’ call for free and fair elections and restore human rights and fundamental freedoms.

We all want a restoration of democracy in Nicaragua, and the United States believes that the recommendations of the Secretary General – combined with the findings of the High Level Commission – provide us with the basis to consider elements needed in order for any elections to result in a free and fair outcome.

The OAS, the organization most firmly committed to the defense of democracy in the Western Hemisphere, must support the democratic aspirations of the Nicaraguan people.

For our part, the United States will continue to promote accountability for the regime’s corruption and human rights violations and abuses. We hope the OAS as an institution will do the same. Thank you.