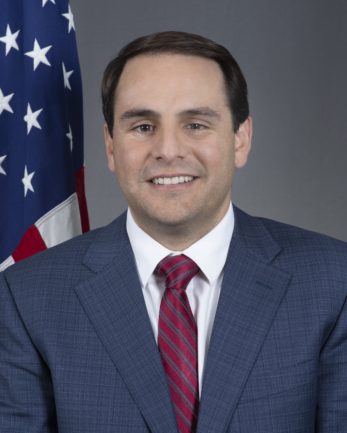 Ambassador Carlos Trujillo was sworn as the U.S. Permanent Representative to the Organization of American States on March 30, 2018, and presented his credentials to the organization on April 5, 2018. A former  prominent Florida attorney and politician, he served as the State Representative for the 105th District in the Florida House of Representatives, Tallahassee, Florida, from 2010 to 2017. He was a Founding Partner, of Trujillo, Vargas, Gonzalez and Hevia LLP, Coral Gables, Florida (2011 – 2017) and President, Carlos Trujillo, PA, Coral Gables, Florida (2007 – 2017.)

Known for his constituent advocacy, legal acumen and leadership, Ambassador Trujillo is fluent in Spanish and has a thorough understanding of Latin American politics. Prior to his ambassadorial confirmation, he also served as special advisor at the United States Mission to the United Nations.

Ambassador Trujillo earned a B.S. in business administration from Spring Hill College, Mobile, Alabama and a J.D. from Florida State College of Law, Tallahassee, Florida. He was Florida Prosecuting Association Legislator of the Year in 2016 and Florida Sheriff’s Association Legislator of the Year in 2015. He is married to Carmen Maria Mir of Coral Gables, Florida. Together they have four children – Carlos, Isabella, Juan Pablo and Felipe.