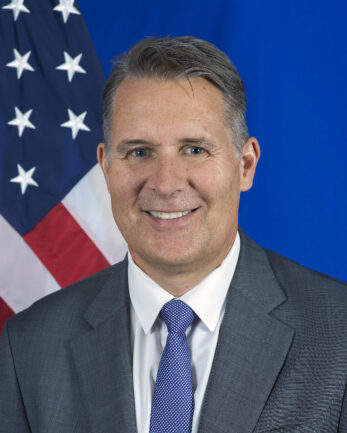 Tom Lersten is a member of the Senior Foreign Service, who currently serves as the Interim Deputy Chief of Mission in the U.S. Mission to the Organization of American States.  Previously, he served as the Political and Economic Counselor at U.S. Embassy Havana, and from 2018-2020 he served as the Deputy Director in the Office of Central American Affairs.

Mr. Lersten also served in the economic section in U.S. Embassy Managua.  Earlier assignments include U.S. Embassy Moscow, and the Consulate General in Dubai, UAE.  In Washington, he has served as the Nicaragua Desk Officer, in addition to other positions in the Department including as a Deputy Director in the Bureau of Counterterrorism and the Bureau of European and Eurasian Affairs.  In the Economic Bureau, he served as the Director of the Global Entrepreneurship Program, and worked to organize the annual Global Entrepreneurship Summit in 2016.

He earned an M.S. in National Security Studies from the National War College, and holds a B.A. from Gustavus Adolphus College, and an M.A. in International Affairs from the American University. Mr. Lersten is originally from Albuquerque, New Mexico.