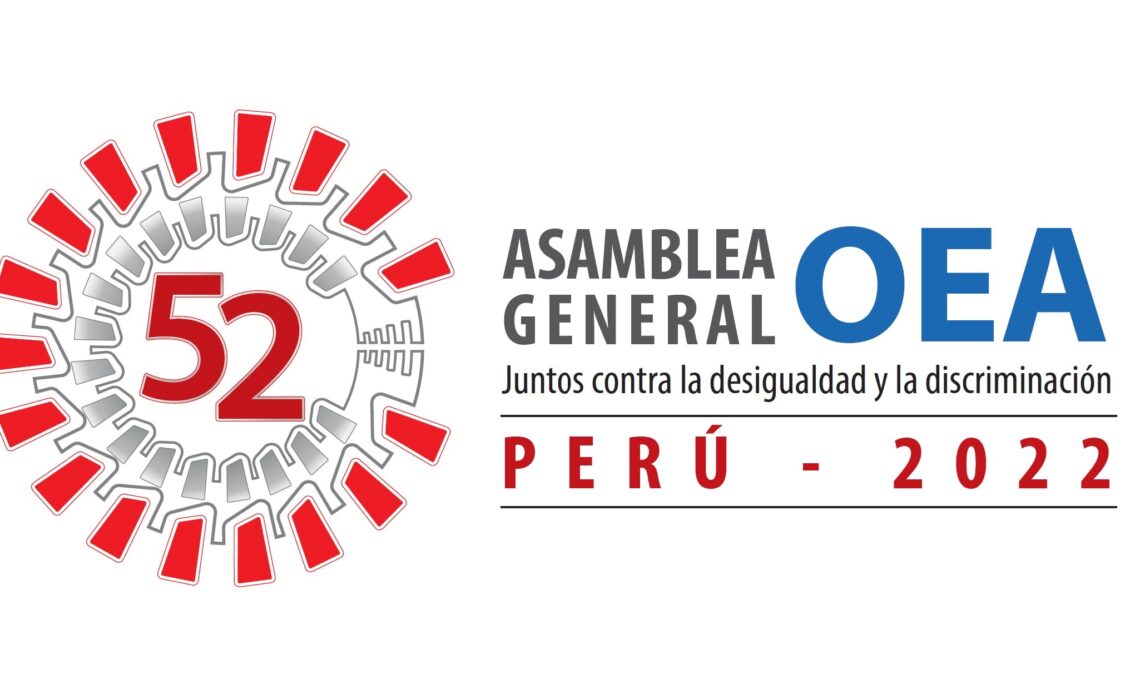 STATEMENT “SITUATION IN THE BOLIVARIAN REPUBLIC OF VENEZUELA”
(Read by the Permanent Representative of Canada to the OAS, Ambassador Hugh Adsett, on behalf
of the delegations of Brazil, Canada, Chile, Costa Rica, Ecuador, Guatemala, United States
of America, Paraguay, and Uruguay, during the fourth plenary session of the fifty-second regular
session of the OAS General Assembly, held on October 7, 2022)
GENERAL ASSEMBLY

STATEMENT ON THE SITUATION IN THE BOLIVARIAN REPUBLIC OF VENEZUELA
The Ministers of Foreign Affairs and Heads of Delegation of Brazil, Canada, Chile, Costa Rica, Ecuador, Guatemala, United States of America, Paraguay and Uruguay gathered on the occasion of the Fifty-second Regular Session of the General Assembly of the Organization of American States (OAS):

Committed to the principles contained in the Charter of the Organization of the American States, as in the Inter-American Democratic Charter;

Reaffirm the content of Article 1 of the Inter-American Democratic Charter which establishes that “the peoples of the Americas have a right to democracy and their governments have the obligation to promote and defend it”;

Reiterate that the essential elements of representative democracy include respect for human rights and fundamental freedoms, holding of periodic, free, and fair elections based on secret balloting and universal suffrage as an expression of the sovereignty of the people, the pluralistic system of political parties and organizations, and the separation of powers and independence of the branches of government;

Also reiterate that democracy is essential for the effective exercise of fundamental freedoms and human rights, in their universal character, indivisible and interdependent, enshrined in the respective constitutions of the States and in inter-American and international human rights instruments;

Express deep concern at the systemic violations and abuses of human rights that continue to occur in Venezuela, and the aggravation of the political, economic, social and humanitarian crisis in that country;

Concerned about the content of the Annual Report of the Inter-American Commission of Human Rights (IACHR) for 2021, which concludes that the erosion of the rule of law in Venezuela has generated “a favorable climate for the systematic commission of gross human rights violations”, the also IACHR notes “the consistent practice of extrajudicial executions (…), arbitrary detentions (…), forced disappearances, as well as torture and other cruel treatment in contexts of deprivation of liberty”;

Alarmed by the content of the recent reports of the United Nations’ Independent International Fact-Finding Mission on the Bolivarian Republic of Venezuela, A/HRC/45/33/CRP.11 dated 15 September 2020, and A/HRC/51/CRP.2, A/HRC/51/CRP.3 and A/HRC/51/43, dated 20 September 2022, whose “investigations demonstrate that crimes and violations, amounting to crimes against humanity, including extremely grave acts of torture, were committed by individuals holding various positions within the hierarchies of DGCIM and SEBIN as part of a plan designed by high-level authorities to repress opponents of the Government”;

Very concerned about the finding of the Independent Mission concerning state and non-state agents’ participation in human trafficking, forced prostitution, sexual and gender violence and violence against indigenous groups, among others, for the exploitation of the Arco Minero, in Bolívar state;

Note that the two Independent Mission reports urge the international community to consider
taking legal action against individuals responsible for the alleged human rights violations and crimes
identified in reports, in accordance with their national legislation and international principles
applicable;

Support the renewal of the United Nations’ Independent International Fact-Finding Mission
on the Bolivarian Republic of Venezuela;

Take note of the decision announced by the Prosecutor of the Criminal Court International, on
November 3, 2021, to open a formal investigation after concluding that crimes against humanity could
have been committed in Venezuela from the year 2017, in accordance with the Rome Statute;

Call for serious, expeditious and impartial investigations, so as to promote justice and
clarification of the truth regarding the involvement of senior officers involved in the violations of rights
human rights committed, in accordance with international human rights law;

Concerned about the subsequent serious migrants and refugee crisis, the largest in the history
of Latin America, which has brought 6.8 million Venezuelans to flee the country;

Urge the immediate and unconditional release of all political prisoners, the cessation of the
harassment, respect for independence of Political parties as well as freedom of expression including
for members of the press, and the restoration of full respect for human rights and fundamental
freedoms;