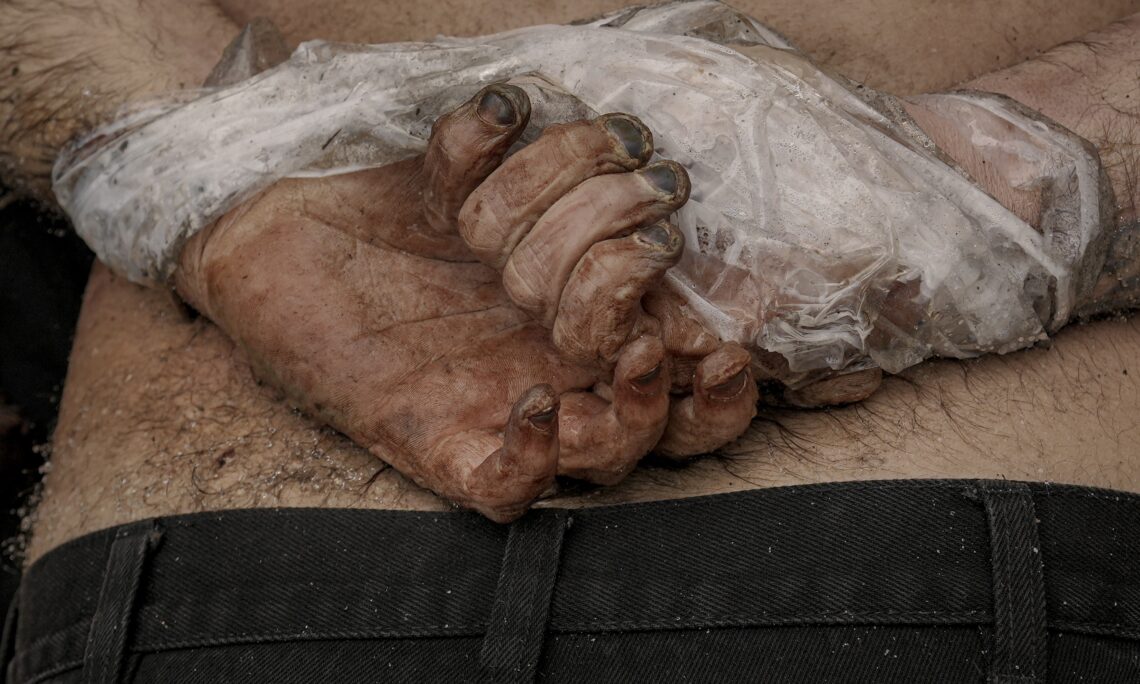 A lifeless body of a man with his hands tied behind his back lies on the ground in Bucha, Ukraine, Sunday, April 3, 2022. Associated Press journalists in Bucha, a small city northwest of Kyiv, saw the bodies of at least nine people in civilian clothes who appeared to have been killed at close range.

Thank you, Madam Chair. Let me start by recognizing Antigua and Barbuda’s and Guatemala’s leadership on this resolution, and all others who co-sponsored this resolution.

The impact of the Kremlin’s unprovoked and exceptionally-brutal war against Ukraine is clear. Thousands of civilians killed, more than six million Ukrainians internally displaced, and four million Ukrainians who fled the country.  Each of these over 10 million people harbor individual stories of hardship and tragedy.

We cannot remain silent as we witness Russia’s atrocities and its blatant violations of international humanitarian law. The horror is on full display:  civilians fleeing for their lives; brutal, unrelenting shelling of civilian targets, including schools, hospitals, orphanages, humanitarian corridors, and other critical civilian infrastructure.  Mass graves filled with Ukrainian civilians, many with their hands tied.  Rape as a weapon of war.  Each day brings more gruesome images to our television screens.

Secretary of State Anthony Blinkin stated on March 23 that Russian forces have committed war crimes in Ukraine. That is not a term we use lightly, and the decision to do so came after careful consideration of all of the evidence.  Sadly, this is likely just the tip of the iceberg.  Russia gives the world no visibility into the areas it occupies.  However, it strains credibility to think Russian forces have changed their ways since being driven out of Bucha without being given time to hide their crimes.

Excellencies, colleagues, ladies and gentlemen, we must hold the Kremlin and its enablers accountable for this brutal and inhumane war. As President Biden stated: “An overwhelming majority of nations recognize that Putin is not only attacking Ukraine, he is attacking the very foundations of global peace and security—and everything the United Nations stands for.”  By extension, the President’s words also mean “everything the Organization of American States stands for.”

That is why we strongly support the adoption of this resolution. The case is clear, and the need for action is urgent.  The OAS is sending a message to the Russian government that its actions violate international law, including international humanitarian law, and are completely contrary to the values of OAS member states and of this institution.  OAS action today sends a message to Russia that it must end hostilities, withdraw its forces, and abide by international law.

I predict Russia’s response will be to scoff at this action, just as they have scoffed at and belittled the OAS on numerous occasions in recent weeks. Why would we expect anything else?  Russia sees itself as an imperial power in the 19th-century model.  It’s attempt to conquer Ukraine is nothing short of naked imperialism.  Their statements disparaging the existence of a Ukrainian nation and asserting the right to rule Ukraine are clear evidence of this.

Even the Orwellian term they use to describe their war of aggression – Putin calls it “a special military operation” – implies that they see the war as a domestic matter. We may never know whether Putin and his advisors were truly blind to the existence of a sovereign, independent Ukrainian nation-state or were simple engaging in the height of bloody-minded cynicism to try to justify their crimes.  In the end, it matters little.

Putin has made clear in his statements and his actions that he will lay waste to Ukraine if the Ukrainian people do not lay down their arms and accept Russia’s demands for their incorporation into the revivified Russian empire he calls “Russkiy mir.”

Today’s action to suspend Russia’s Observer status at the OAS is important to ensure our own consistency with what is right and just, legal and acceptable. By doing so, we show respect and support for human rights and international humanitarian law, and we honor the OAS Charter.  We could not be silent in the face of Russia’s brutal attack on a peaceful, sovereign, member of the international community, a country whose only “crime,” if you can call it that, was to choose its own path and refuse to bend to Moscow’s dictat.

Our action signals to Russia that the world is watching. The Kremlin and its enablers will be held to account for atrocities such as those we have seen in Bucha and other Ukrainian cities temporarily occupied by Russia’s forces.

Our action today shines a bright light on an ugly reality, calling out the Russian government for its unjustified and illegal use of force and its utter disregard for humanitarian law. We – the OAS –cannot turn a blind eye to the suffering Russia’s invasion of Ukraine has caused.

We cannot proceed with business as usual—at the OAS or elsewhere—while Russia prosecutes a barbaric war of aggression against a sovereign neighbor, while at the same time issuing apocalyptic threats against all those who call on Russia cease its attacks on international peace and security.

Madame Chair, ladies and gentlemen, today’s resolution would have merit even if its only result was to show that we will not be associated with a permanent observer’s actions that run so contrary to our collective values and principles. We have the right to determine with whom we will break bread, and as long us Russia has Ukrainian blood on its hands, they are not welcome at our table.

To the Ukrainian people, please know we stand with you as you face this brutal attack on your sovereignty and freedom. Let us all hope to match your courage.

Adopted by the Permanent Council, April 21, 2022 by the following vote:

THE PERMANENT COUNCIL OF THE ORGANIZATION OF AMERICAN STATES

ALARMED by the rising number of deaths and the increasing displacement of people and, also, by the destruction of civil infrastructure caused by the Russian Federation’s aggression against Ukraine and its ongoing war;

APPALLED by the reports of the terrible atrocities committed by Russian armed forces in Bucha, Irpin, Mariupol and in other Ukrainian towns, and at the Kramatorsk train station;

EXPRESSING GRAVE CONCERN at the Russian Federation’s violation of international law including international humanitarian law, particularly the provisions of the Geneva Conventions of 1949 and Additional Protocol I thereto of 1977;

CONSIDERING the Russian Federation’s disregard of the exhortations of the Organization of American States (OAS) to withdraw its military forces from the territory of Ukraine within its internationally recognized borders and its continued gross and systematic violations of human rights in Ukraine which contravene the principles and purposes of the OAS,