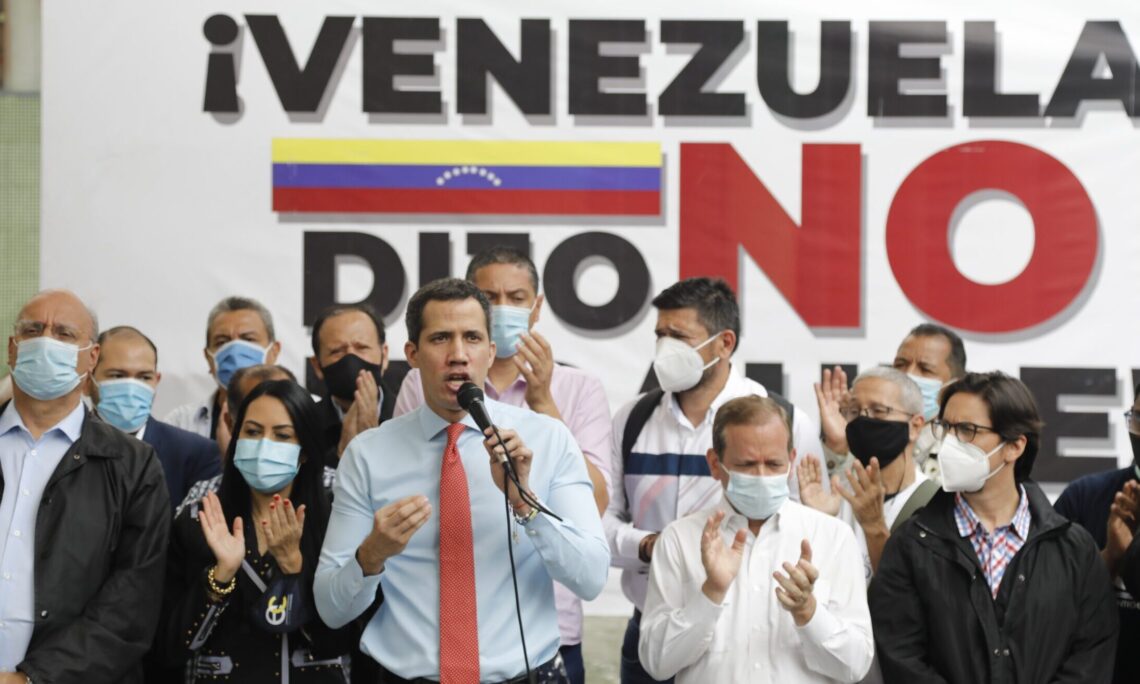 Venezuela’s legitimate President Juan Guaido speaks during a press conference a day after fraudulent parliamentary elections in Venezuela, rejecting the illegitimacy of the process which did not meet democratic standards and has been denounced by the international community. (AP Photo)

Madam Chair, thank you very much for convening this Special Permanent Council meeting, which reaffirms the OAS stance in support of a return to democracy in Venezuela. It is important for the OAS and the world to recognize the fraudulent December 6 elections as the latest act in the playbook of the Maduro regime to undermine and ultimately destroy democracy in Venezuela.

The Maduro regime has already subverted democracy and violated the Venezuelan constitution through the fraudulent 2018 Presidential elections, unconstitutional packing of the national electoral authority, and partisan control of the Venezuelan Supreme Court and legal system.

The last democratic election in Venezuela was the 2015 Parliamentary election, when the Venezuelan people overwhelming rejected Maduro and voted for opposition control of the National Assembly. Since then, the Maduro regime has  smothered the opposition’s constitutional authority, creating a rival and illegitimate Constituent Assembly filled with Maduro loyalists, and with the Supreme Court restricting the powers of the National Assembly, the police arresting its deputies , and the regime prohibiting access to the  National Assembly

Maduro has nearly destroyed a once prosperous country. The economy is in free fall and with hyperinflation has resulted in a month’s wage barely covering one day’s worth of food.  The coronavirus is ravaging the country, with the health care system  nearing collapse.  Over five million Venezuelans, roughly the number that voted in the so-called elections, have fled the country.  The people who remain are desperate, and the Maduro regime preys on their desperation, allocating  meager public assistance and food assistance to those who support and vote for the regime.

Madam Chair, the OAS and the majority of its member states can be proud of the stance they have taken to support democracy in Venezuela. Member States condemned the 2018 Presidential election.  We seated the representatives of the opposition National Assembly as the true democratic voice of the Venezuelan people.  We repeatedly denounced the grave human rights violations of the Maduro regime, supporting the right to peaceful protest, and condemning the practice of arbitrary arrest, including of opposition members of the National Assembly.  We have repeatedly called for the release of political prisoners.

In the 2020 OAS General Assembly, we denounced the Maduro regime for undermining Venezuela’s democratic system. We insisted that the planned National Assembly elections include all political actors and citizens, the release of political prisoners, and legitimate international electoral observation.  None of these came to pass.  We welcomed the United Nations independent fact-finding report that identified massive human rights violations and called for ending the use of excessive force, extrajudicial executions, forced disappearances, arbitrary detention, and torture. We called on the Maduro regime to allow the delivery of desperately needed humanitarian assistance.  Finally, we urged free and fair Presidential elections so the people of Venezuela could finally choose their own leaders.

Now that the Maduro regime has carried out its fraudulent elections, we are pleased that the OAS is upholding the principles of the Democratic Charter and standing firmly for the restoration of democracy in Venezuela. We have just approved a strong resolution, and with this resolution, the OAS joins the Lima Group, the European Union, the International Contact Group, and over 50 countries worldwide to reject this election farce. Today we have been called upon to take a stand for democracy, and we have done so.

The United States recognizes that the next months will be very difficult for the Venezuelan people. The illegitimate Maduro regime has done tremendous damage to this proud and once-prosperous country, damage that will take many years to repair.  We firmly believe that true democracy, with free and fair Presidential elections, is the only path forward.  Many countries and intermediaries have tried to negotiate with the Maduro regime, urging it to ease stop its authoritarian actions and put an end to their failed political and economic policies. None have had success, and Venezuela remains on the same downward trajectory.

The international community cannot allow Maduro, who is in power illegitimately because he stole the 2018 elections, to gain from stealing a second election. We urge all countries committed to democracy to join us in supporting the legitimate National Assembly and Interim President moving forward.  Neither Maduro nor a new, fraudulently elected National Assembly will represent the legitimate voice of the Venezuelan people, which must be expressed through free and fair elections.

REJECTION OF THE PARLIAMENTARY ELECTIONS
HELD ON DECEMBER 6 IN VENEZUELA

THE PERMANENT COUNCIL OF THE ORGANIZATION OF AMERICAN STATES:

REITERATING the principles and mechanisms established in the Charter of the Organization of American States and the Inter-American Democratic Charter for the preservation of democratic institutions in the member states;

REAFFIRMING that the peoples of the Americas have the right to democracy and governments the obligation to promote and defend it;

EXPRESSING its rejection of the fraudulent election of December 6, conducted by the illegitimate regime of Nicolás Maduro, with the evident purpose of eliminating the only legitimate and democratically elected institution remaining in Venezuela;

AFFIRMING, with grave concern, that the installation of a non-democratically elected entity deepens the process of destruction of democracy and the rule of law in Venezuela, aggravating the continuing deterioration of political and social conditions, including economic, humanitarian, human rights, and security in the country; and

NOTING with satisfaction the initiative of civil society, with the backing of the National Assembly, to hold a popular consultation for the purpose of allowing citizens to express themselves regarding the conditions of the fraudulent election held on December 6,

1.​To reject the fraudulent elections held in Venezuela on December 6, 2020, and to not recognize its results, for being neither free nor fair in accordance with the conditions established in international law; for lacking impartiality and transparency; for not having had the participation of all political actors and citizens; for not having released political prisoners; for the lack of independence of the electoral authority; and for not having an independent and credible international electoral observation.

2.​To condemn in the strongest terms the consistent and deliberate strategy of the illegitimate regime of Nicolás Maduro to undermine the democratic system and the separation of powers, including through the installation of a non-democratically elected entity as a result of the fraudulent elections of December 6, consolidating Venezuela as a dictatorship.

3.​To make an urgent call for the protection and physical security of the democratically elected members of the National Assembly to be guaranteed and for the safe return of those members of the opposition who are in exile

4.​To call for the immediate release of all political prisoners in Venezuela, and for the cessation of continued political prosecutions

5.​To express solidarity with the Venezuelan people and firm support for the persistent and broad efforts of democratic actors in Venezuela, particularly political parties and civil society, towards the restoration of democracy in the country.

6.​To reiterate the call to hold, as soon as possible, free, fair, transparent and legitimate presidential and parliamentary elections, with independent and credible international electoral observation, as part of a transition process that leads to the appointment of a democratically elected government in accordance with the will of the Venezuelan people and the Venezuelan constitution.

7.​To urge all member states and invite the permanent observers of the Organization of American States to support the Venezuelan people in their efforts to restore democratic order in Venezuela, through the adoption of diplomatic, political, economic, and financial measures aimed at finding a peaceful solution to the situation in Venezuela.

8.​To demand full access to the international community to allow the provision of assistance to the most vulnerable populations affected by the crisis in Venezuela, in accordance with generally recognized humanitarian principles and international law.