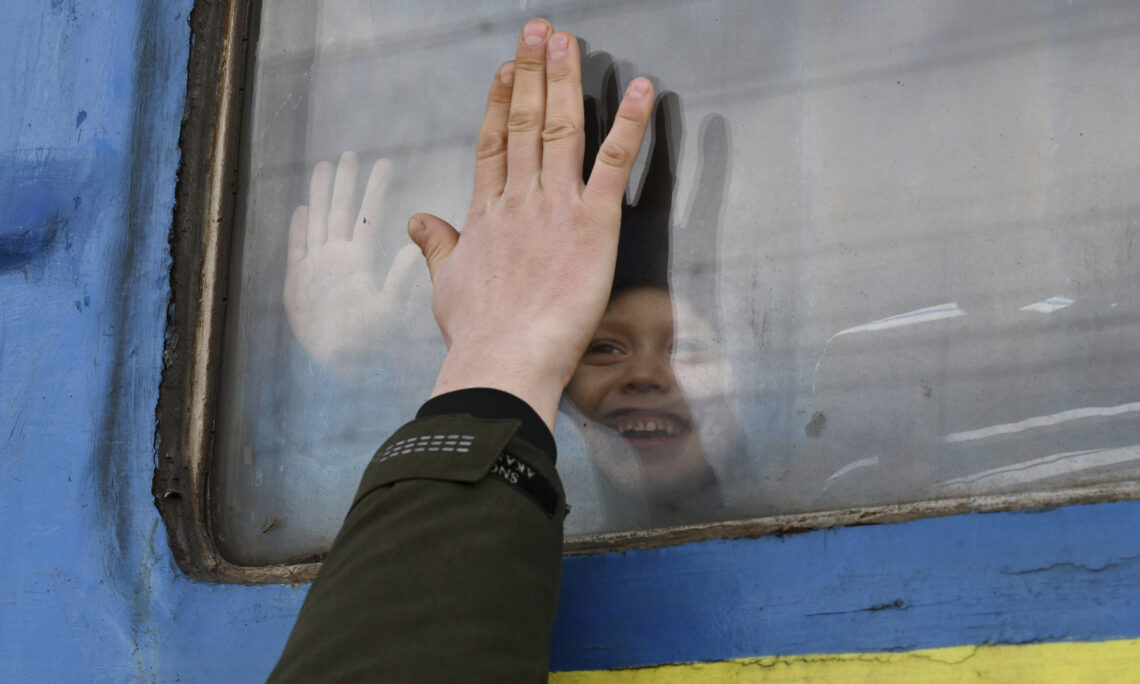 A child says goodbye to a relative looking out the window of a train carriage waiting to leave Ukraine at the railway station in Kramatorsk, eastern Ukraine. (AP Photo/Andriy Andriyenko)

Remarks by
Bradley A. Freden
Interim Permanent Representative of the United States
March 25, 2022

Thank you, Chair.  We express our solidarity with the people and Government of Ukraine.  As Secretary Blinken mentioned previously, “in this time of uncertainty, we have a clear way forward:  Help Ukraine defend itself.  Support the Ukrainian people.  Hold Russia accountable.”

Chair, since this distinguished body last met to consider the crisis in Ukraine, Putin’s unprovoked and unjustified war on Ukraine  has led to a humanitarian crisis, including repeated violations of international humanitarian law, human rights abuses and war crimes.

Putin has been clear about his war aims.  He seeks to conquer and annex Ukraine, its people, and its sovereign territory to the Russian Federation.  If he cannot conquer Ukraine, he aims to destroy it.  His purported justification for this unbridled war of aggression:  Ukraine once constituted part of an earlier Russian empire.

However, we have a message for Mr. Putin:  The age of empires and imperial conquest is over.  The age of large, powerful countries dictating the foreign policy of its smaller  neighbors is over.  And the age of resolving border disputes at the point of a gun is over.

The world has witnesses indiscriminate attacks on population centers and attacks deliberately targeting civilians, as well as other atrocities, many of which constitute war crimes.

Many of these sites have been clearly identifiable as in use by civilians.  This includes the Mariupol maternity hospital, as the UN Office of the High Commissioner for Human Rights expressly noted in a March 11 report.  It also includes a strike that hit a Mariupol theater, clearly marked with the Russian word for “children” in huge letters visible from the sky.

Putin’s forces used the same tactics in Gronzy, Chechnya, and Aleppo, Syria, where they intensified their bombardment of cities to break the will of the people.  Their attempt to do so in Ukraine has again shocked the world and, as President Zelenskyy has soberly attested, “bathed the people in Ukraine in blood and tears.”

Earlier this week, Secretary Blinken announced that, based on information currently available, the U.S. government assesses that members of Russia’s forces have committed war crimes in Ukraine.

Here I must disagree with my distinguished colleague and friend from Brazil.  While it may be true that the OAS is not the institution that will resolve the war Putin has unleashed on Ukraine, as an organization of peaceful democracies, it is certainly within our rights to decide with whom we will break bread.  Putin’s Russia does not belong at our table.  As a region, we cannot witness silently his actions.  We are called upon to act.

The OAS is the region’s premier political forum for multilateral dialogue and action.  Our Hemisphere has a rich diversity of peoples and cultures, but we are united in our common values.

Through this resolution, particularly with all the OAS member states who co-sponsored, we are reminded of our commitment in the OAS Charter to peace and justice.   I applaud the missions of Guatemala and Antigua and Barbuda for leading this resolution.

Today, the OAS is taking a step to speak clearly and directly.  We do not accept these serious violations of international law.

We urge Russia to cease its brutal attacks and withdraw from Ukraine.

We must remain united in our message to support the Ukrainian people and hold Russia accountable.

We look forward to continuing to work with OAS member states to uphold the values of the international system and support the full restoration of Ukraine’s territorial integrity.

Adopted by the Permanent Council, March 25,2022 by the following vote:

A RESOLUTION: “THE CRISIS IN UKRAINE”

RECALLING the obligation of all States under Article 2 of the United Nations Charter to refrain in their international relations from the threat or use of force against the territorial integrity or political independence of any state, or in any other manner inconsistent with the purposes of the United Nations, and to settle their international disputes by peaceful means;

REAFFIRMING the Charter of the Organization of American States in particular Article 1 by which OAS member states are committed, “to achieve an order of peace and justice, to promote their solidarity, to strengthen their collaboration, and to defend their sovereignty, their territorial integrity, and their independence”;

RECALLING Article 3(g) of the Charter of the OAS by which “American States condemn war of aggression: victory does not give rights”;

REITERATING that the essential rights of man are not derived from one’s being a national of a certain state, but are based upon attributes of the human personality, and also that these principles have been set forth in the Charter of the Organization of American States, in the American Declaration of the Rights and Duties of Man, and in the Universal Declaration of Human Rights, and that they have been reaffirmed and refined in other international instruments, worldwide as well as regional in scope;

ACKNOWLEDGING the shared values and common approaches contained in the Declaration on Security in the Americas (2003), and that peace is a value and a principle in itself and is based on democracy, justice, respect for human rights, solidarity, security, and respect for international law;

REITERATING that every State has the right to choose, without external interference, its political, economic, and social system and to organize itself in the way best suited to it, and that every state has the duty to abstain from intervening in the affairs of another State;

RECALLING the Declaration CP/INF.9293/22 in the OAS Permanent Council meeting of February 25, 2022, “The Situation in Ukraine”, by which 25 member states condemned the unlawful, unjustified, and unprovoked Russian invasion of Ukraine and called for the immediate withdrawal of the military presence and the cessation of any further military actions in the country;

RECALLING ALSO UN General Assembly Resolution A/RES/ES-11/1, “Aggression against Ukraine”, at its Eleventh Emergency Special Session on March 2, 2022, deploring “in the strongest terms the aggression by the Russian Federation against Ukraine” and demanding that Russia “immediately, completely and unconditionally withdraw all of its military forces from the territory of Ukraine within its internationally recognized borders”;

CONSCIOUS that the UN General Assembly Resolution also expressed grave concern at the deteriorating humanitarian situation in and around Ukraine, with an increasing number of internally displaced persons and refugees in need of humanitarian assistance, as well as the potential impact of the conflict on increased food and energy insecurity globally;

AWARE that the Resolution also demanded that safe and unfettered passage be allowed to destinations outside of Ukraine and to facilitate the rapid, safe and unhindered access to humanitarian assistance for those in need in Ukraine, to protect civilians, including humanitarian personnel and persons in vulnerable situations, including women, older persons, persons with disabilities, indigenous peoples, migrants and children, and to respect human rights;

ALARMED that the humanitarian situation in Ukraine continues to deteriorate and that the UNHCR has reported that more than 3.2 million people have now fled Ukraine, and that 13 million more of those hardest hit by the war are internally displaced and, also, that the situation in cities such as Mariupol and Sumy is “extremely dire, with residents facing critical and potentially fatal shortages of food, water and medicine”;

RECALLING that the UN General Assembly, by Resolution A/ES-11/L.2  “Humanitarian consequences of the aggression against Ukraine” adopted on March 24, 2002 deplored “the dire humanitarian consequences of the hostilities by the Russian Federation against Ukraine, including the besiegement of and shelling and air strikes in densely populated cities of Ukraine, in particular Mariupol, as well as attacks striking civilians, including journalists, and civilian objects, in particular schools and other educational institutions, water and sanitation systems, medical facilities and their means of transport and equipment, and the abduction of local officials, as well as attacks striking diplomatic premises and cultural sites”;

AWARE that, on 16 March 2022, the International Court of Justice issued an Order “indicating the following provisional measures: (1) The Russian Federation shall immediately suspend the military operations that it commenced on 24 February 2022 in the territory of Ukraine; (2) The Russian Federation shall ensure that any military or irregular armed units which may be directed or supported by it, as well as any organizations and persons which may be subject to its control or direction, take no steps in furtherance of the military operations referred to in point (1) above; and (3) Both Parties shall refrain from any action which might aggravate or extend the dispute before the Court or make it more difficult to resolve.”;

RECALLING resolutions CP/RES. 577 (896/92) of April 1, 1992 and CP/RES. 629 (987/94) of May 9, 1994, through which the Permanent Council granted the Governments of the Russian Federation and Ukraine respectively the status of Permanent Observer to the Organization; and resolution CP/RES. 52 (61/72), which established that the purpose of Permanent Observers to the OAS is to promote cooperative relations among states from both the Americas and elsewhere that participate in the Organization’s programs;

AWARE that the Russian Federation was granted the status of Permanent Observer to the OAS under certain conditions at the time, including paragraph 6 of CP/RES. 407 (573/84) of 27 June 1984 which empowers the Permanent Council to “review the permanent observer status granted to a state when it considers that the circumstances that determined the acceptance of its request have significantly changed or no longer obtain”;