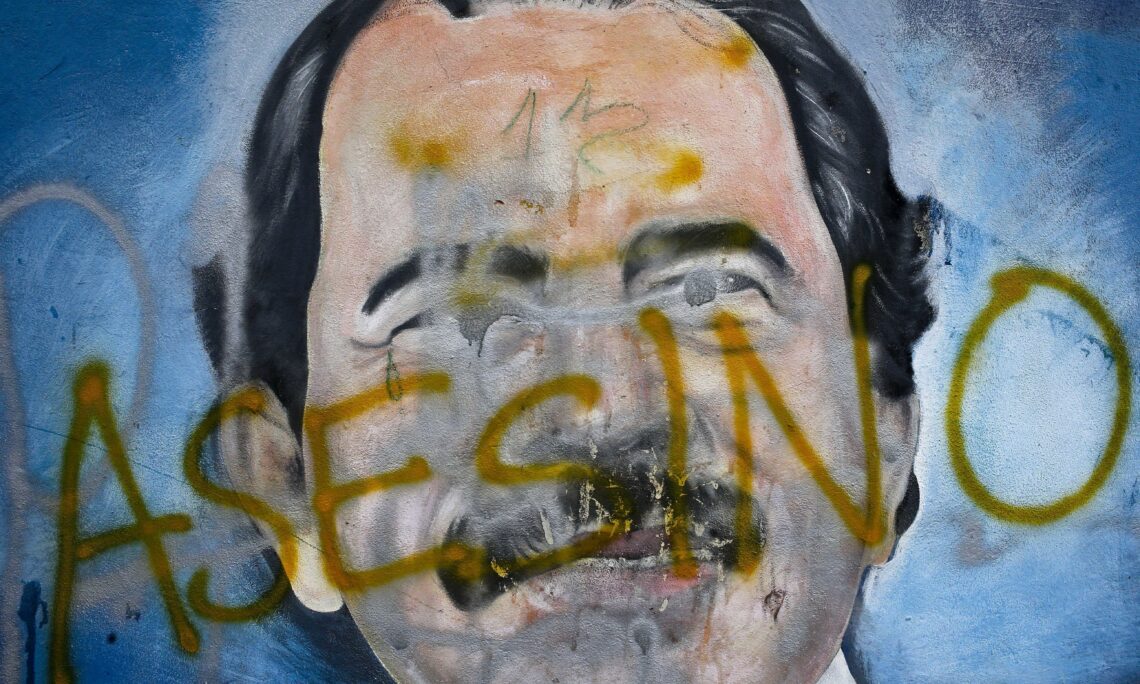 The Spanish word for "Murderer" covers a mural of Nicaragua's President Daniel Ortega, as part of anti-government protests demanding his resignation in Managua, Nicaragua, May 26, 2018. (AP Photo)

Thank you to our fellow delegations for convening today’s timely special session of the Permanent Council.

Madam Chair, I also want to thank the expert speakers from the Group of Human Rights Experts on Nicaragua (GHREN) as well as the Inter-American Commission on Human Rights for their observations on the worsening state of political and civil rights in Nicaragua. We value their contributions to our discussion here today.

I want to begin by stressing that instead of fulfilling past commitments to release its political prisoners unconditionally, the Ortega-Murillo regime continues to threaten, harass, and detain ever more of its citizens.

The United States, joined by many governments represented here today, has spoken out repeatedly on the ongoing threats to human rights organizations that seek to document incidents and provide legal representation to political prisoners.

Madam Chair, we have also condemned the ongoing harassment and surveillance of human rights defenders and former political prisoners and their families who continue bravely to call for democratic transition in Nicaragua.

However, the Ortega-Murillo regime continues to show where its priorities lie –by silencing and stifling civil society, human rights defenders, educational and religious institutions, and organizations which benefit the community and the people of Nicaragua.

Let me be clear: the United States supports the people of Nicaragua seeking peaceful democratic change in their country with all diplomatic and economic tools at our disposal.

The United States condemns the sentencing of political prisoners and ongoing repression of universities, journalists, and civil society, including human rights defenders and religious actors. President Ortega and Vice President Murillo continue to demonstrate their aim of entrenching their family’s authoritarian control over every aspect of life in Nicaragua. Targeted harassment and repression of Catholic Bishop Rolando Álvarez during the last two weeks is the latest example.

We have seen the brutal treatment of those unjustly detained, who only sought peaceful change through free and fair elections. These political prisoners have done nothing wrong.  However, this regime – terrified of losing power – has tightened its grip and punished political opposition, independent media, students, business leaders, educators, religious actors and civil society.

We have heard yet again today of abuses against political prisoners, which includes excessive confinement, continuous interrogations, denial of medical care and access to reading materials, including sacred texts, inadequate food, and sleep deprivation. These abuses are egregious and unconscionable for all, but especially for the many older or ill prisoners.

We are also concerned that Nicaragua continues its negative trend on religious freedom, including escalating threats against Catholic clergy, a topic recently addressed in our Committee on Juridical and Political Affairs last week.

As President Biden noted on November 16, 2021, “Members of the Nicaraguan National Police (NNP), along with violent mobs of pro-government supporters also controlled by government actors, have attacked religious institutions in retaliation for their support for political and religious leaders.”

Madam Chair and colleagues, we remain concerned that these groups, associated with the government and government officials continue to harass, insult, and make death threats against Catholic clergy.

We also express concern for the continuing verbal harassment and inflammatory rhetoric directed at religious leaders from President Ortega and Vice President Murillo who have labeled priests and bishops, “terrorists in cassocks” and “coup-plotters,” accused them of committing crimes, and threatened them with prosecution on trumped up accusations of inciting “hatred” against pro-government supporters. A week ago, Vice-President Murillo accused Catholic clergy of committing “crimes against spirituality.”

We continue to believe that the OAS, the organization most firmly committed to the defense of democracy in the Western Hemisphere, must support the democratic aspirations of the Nicaraguan people.

With this in mind, we thank Canada and Chile – as well as the leadership of the delegation of Antigua and Barbuda – for championing efforts to develop today’s Permanent Council resolution which addresses these concerns.

Madam Chair, this is why we also urge collective support to approve a strong OAS General Assembly resolution on Nicaragua.

To this end, the United States looks forward to working collaboratively with all of you on efforts in Lima to hold the Nicaraguan government accountable on its abuses. This merits ongoing attention here in this Council and at the upcoming General Assembly.

At the same time, we must continue to work with partners in the UN and EU to increase international pressure that will result in the transition to democratic government and respect for human rights the Nicaraguan people deserve.

Today is a key step in this effort, Madam Chair, and we thank all of the members of the OAS Working Group on Nicaragua for their commitment and engagement.

I reaffirm the U.S. commitment to work in partnership to secure a strong and broadly supported text in October. Thank you very much.

(Presented by the Delegations of Antigua and Barbuda,
Canada, Chile, Costa Rica, Peru, the United States and Uruguay)

THE PERMANENT COUNCIL OF THE ORGANIZATION OF AMERICAN STATES:

RECALLING Article 1 of the Inter American Democratic Charter which states that “the peoples of the Americas have a right to democracy and their governments have an obligation to promote and defend it”; and Article 4 which states that “freedom of expression and of the press are essential components of the exercise of democracy”;

REAFFIRMING the Charter of the Organization of American States (OAS) that representative democracy is an indispensable condition for the stability, peace and development of the region;

DEEPLY TROUBLED that despite all exhortations, contained in all statements, resolutions and mandates of the General Assembly and Permanent Council of the OAS, to the Government of Nicaragua to uphold its human rights obligations, the climate of oppression has worsened with an increasing number of arbitrary arrests and detentions; forced closure of non-governmental organizations; the autocratic seizure of Mayors’ offices in five municipalities held by an opposition political party; an intensification of repression of journalists and media freedom; and attacks on nuns and priests of the Roman Catholic faith;

AWARE that this worsening situation was confirmed in an Oral Report on June 16, 2022 by the United Nations High Commissioner for Human Rights, Michelle Bachelet; and ALARMED that the Report expresses serious concern that the Government of Nicaragua continues to perpetrate arbitrary detentions where detainees are held in appalling conditions;

AWARE as well of the establishment by the United Nations Human Rights Council in March 2022 of a Group of Human Rights Experts on Nicaragua;

NOTING the ongoing work of the Inter American Commission on Human Rights’ Special Monitoring Mechanism for Nicaragua (MESENI) in highlighting human rights concerns through its mandate to monitor the human rights situation in Nicaragua;

MINDFUL that, on May 27, 2022, the Special Rapporteur for Freedom of Expression of the Inter American Commission on Human Rights called for an end to the constant attack by Nicaraguan authorities against the Roman Catholic Church and that, on July 15, 2022, the Rapporteur condemned the escalating repression by Nicaraguan authorities against journalists and media outlets in Nicaragua;

ALSO MINDFUL that the Inter-American Commission on Human Rights has called, inter alia, for Nicaragua to guarantee that political prisoners have regular contact with their families in conditions of dignity and that women deprived of liberty be provided by the State urgent specialist medical care;

CONSCIOUS that the socio-political, economic and human rights situation in Nicaragua is driving thousands of people to flee the country to neighboring states in unprecedented numbers, and this is having a deleterious effect on these countries and on the refugees themselves;

FURTHER RECALLING the resolution of the Permanent Council CP/RES. 1188 (2355/21) “Outcome of the Permanent Council’s Deliberations of November 29th 2021 on The Situation in Nicaragua Pursuant to the Resolution Adopted at the Fifty First Regular General Assembly” of December 8, 2021 which concluded that Nicaragua was not in compliance with its commitments under the OAS Democratic Charter; and which offered to the Government of Nicaragua, the assistance of a high-level good offices mission of the OAS to return to compliance with the Inter American Democratic Charter;

WILLING to renew its offer of engagement and dialogue in the interest of Nicaragua and its people,