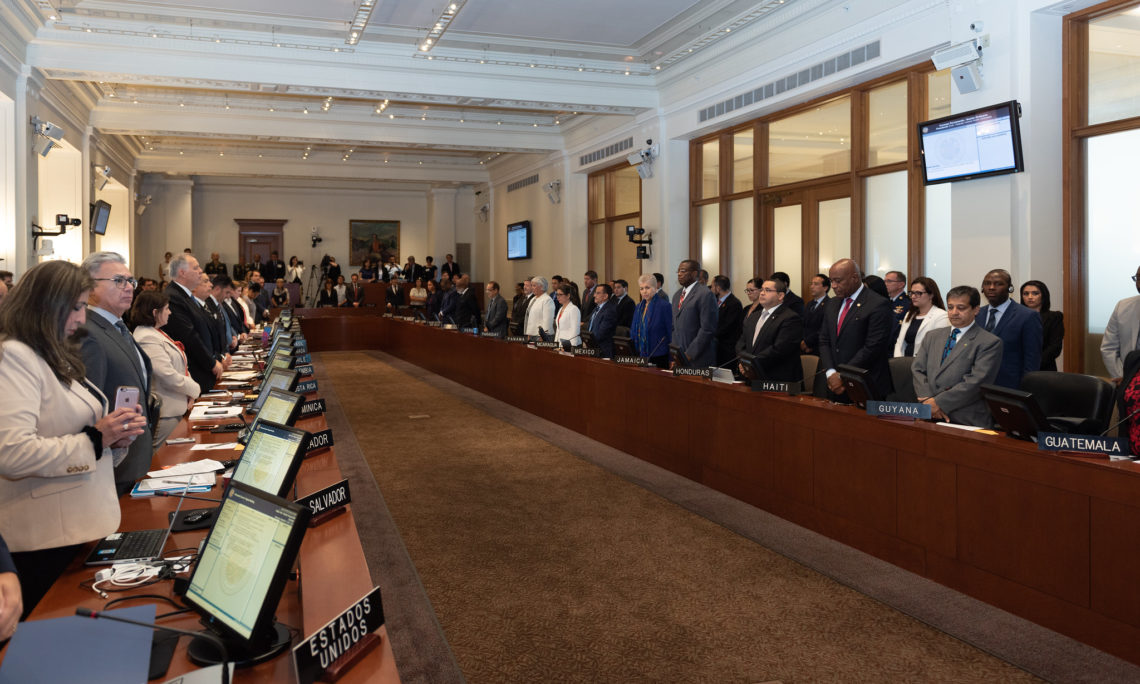 The OAS Permanent Council commemorates the anniversary of the September 11, 2001 terrorist attacks on the United States. (OAS Photo)

Thank you, Madame Chair. I would be remiss if I did not take the opportunity of this Permanent Council meeting to mention two signal event that mark this date – September 11 – in our memories.

Eighteen years ago today all the member states of this Organization, gathered at a Special General Assembly in Lima, adopted the Inter-American Democratic Charter, recognizing that “the peoples of the Americas have a right to democracy and their governments have an obligation to promote and defend it.”

On the same day, only minutes earlier, nearly 3000 innocents were murdered in a cowardly act of terrorism that cost the lives of citizens from more than 90 nations around the globe – including OAS member states … 47 innocent victims from the Dominican Republic…24 from Canada…18 from Colombia…16 from Jamaica…15 from Mexico…14 from Trinidad and Tobago…13 from Ecuador…5 from Peru…4 from Argentina…3 from Guyana…3 from Brazil…2 from Haiti…2 from El Salvador…2 from Paraguay… 1 from Chile, 1 from Honduras, and 1 from Venezuela.

Speaking in Lima at the Special General Assembly that day to sign the Inter-American Democratic Charter, then-Secretary of State Colin Powell told his fellow foreign ministers:

“A terrible, terrible tragedy has befallen my nation, but it has befallen all of the nations of this region, all the nations of the world, and befallen all those who believe in democracy. Once again we see terrorism, we see terrorists, people who don’t believe in democracy, people who believe that with the destruction of buildings, with the murder of people, they can somehow achieve a political purpose. They can destroy buildings, they can kill people – and we will be saddened by this tragedy – but they will never be allowed to kill the spirit of democracy.

They cannot destroy our society. They cannot destroy our belief in the democratic way” The Secretary continued “It is important… that I remain here for a bit longer in order to be part of the consensus of this new charter on democracy. That is the most important thing I can do before departing to go back to Washington, D.C. and attend to the important business that awaits me and all my other colleagues in the administration, and all Americans.”

Madame Chair, colleagues around the table in this room: May September 11 be a day of reflection for all of us — a day to remember those 3000 who perished at the hands of terrorists, and a day to recall the noble principles of the Inter-American Democratic Charter we pledged to uphold on this very same day 18 years ago.

We must never forget.