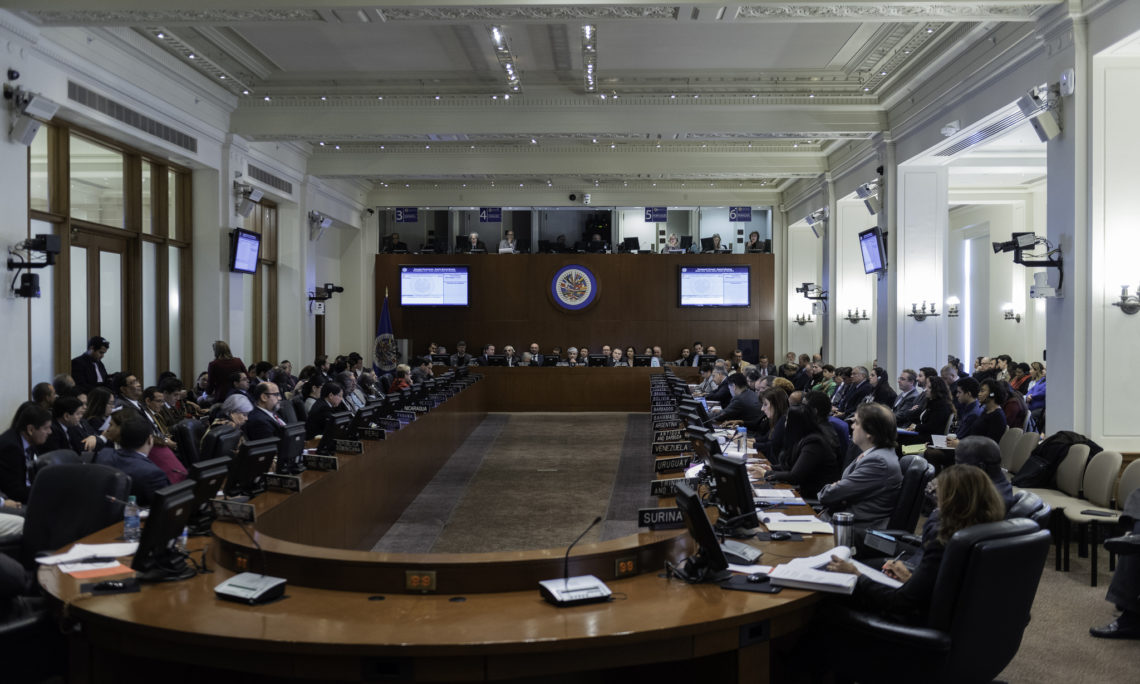 On January 11, 2019, the OAS Permanent Council met to consider the situation in Nicaragua. Ambassador Carlos Trujillo, U.S. Permanent Representative to the OAS, addressed the Council.

Thank you Mr. Chairman for convening today’s special session of the Permanent Council, at the request of Secretary General Almagro, to address the worsening situation in Nicaragua. We support for his call to action consistent with the spirit and terms of the Inter-American Democratic Charter.

The worsening and ongoing threats against the Ortega government’s perceived opponents clearly constitute an infringement upon the “right and responsibility of all citizens to participate in decisions relating to their own development,” as articulated in the Democratic Charter.

It is undeniable that many actions taken by the Government have severely undermined the foundation of Nicaraguan democracy and therefore constitute violations of the Democratic Charter.

Some of the actions that make up this larger pattern include:
• the manipulation of the Supreme Electoral Council, a fourth co-equal branch of government, to weaken or decertify opposition political parties;

• the refusal to invite and accredit credible domestic and international observers for elections;

• the subjection of non-governmental organizations and other members of civil society to increasing political and legal pressures to avoid criticizing the government;

• the incitement of organized violence against members of the political opposition and civil society who attempt to peacefully protest government actions, also noted in statements by the Inter-American Commission on Human Rights; and

• the use of the judicial branch to cover up crimes by the regime and its allies, instead of investigating and prosecuting those responsible for hundreds of killings during recent protests.

These actions, combined with the recent expulsion of the Inter-American Commission’s monitoring mechanisms – the Independent Group of International Experts (GIEI) and the Special Monitoring Mechanism (MESENI) – provide clear evidence of the Nicaraguan regime’s wanton disregard for human rights and democratic practices.
Indeed, the GIEI December report credibly documents extensive, systematic abuses, clearly ordered by the regime, during the months of April and May 2018 alone.

Just last night, Supreme Court Justice Rafael Solis, a strong Sandinista figure, resigned his position writing to President Ortega that he has created a “state of terror” that lacks rule of law and respect for the Constitution. It is a strong argument that the country’s constitutional order is broken when a prominent Supreme Court Justice within the government of Nicaragua writes a letter like that.

Also, this morning the superintendent of banks – Victor Urcuyo – also resigned his post.

Mr. Chairman, Mr. Secretary General – this Council has an obligation to take action regarding our shared commitment to uphold the Democratic Charter.

The United States continues to support the proposal for early, free, fair, and transparent elections made by Nicaragua’s broad-based Civic Alliance, as part of the National Dialogue process.

We also call on the government to reconsider its decision to suspend the presence of GIEI and MESENI. These mechanisms are needed in Nicaragua now more than ever.

The United States will continue to hold the Ortega government to account for its repression and violence. Our November 27 U.S. Executive Order is designed to counter further the Ortega regime’s rampant corruption, undermining of democratic processes or institutions, and serious human rights abuses.

Thus far, the United States has revoked the visas of dozens of persons with links to corruption, gross violations of human rights, and destruction of democratic norms. In certain circumstances, family members of those individuals are also subject to visa restrictions. We will not allow them to enjoy their ill-gotten gains in the United States – and no other likeminded country should either.

We cannot accept these violations of democratic order. The officials responsible for the violations of human rights, and the repression of civil society, must be held to account. They are not protecting democracy, they are endangering democracy, and they should be forced to resign their positions.

Mr. Chairman, governments and non-governmental organizations the world over have raised their voices of concern about what is happening to Nicaraguan democracy. The OAS, the organization most firmly committed to the defense of democracy in the Western Hemisphere, must join them in denouncing the Nicaraguan governments’ actions.