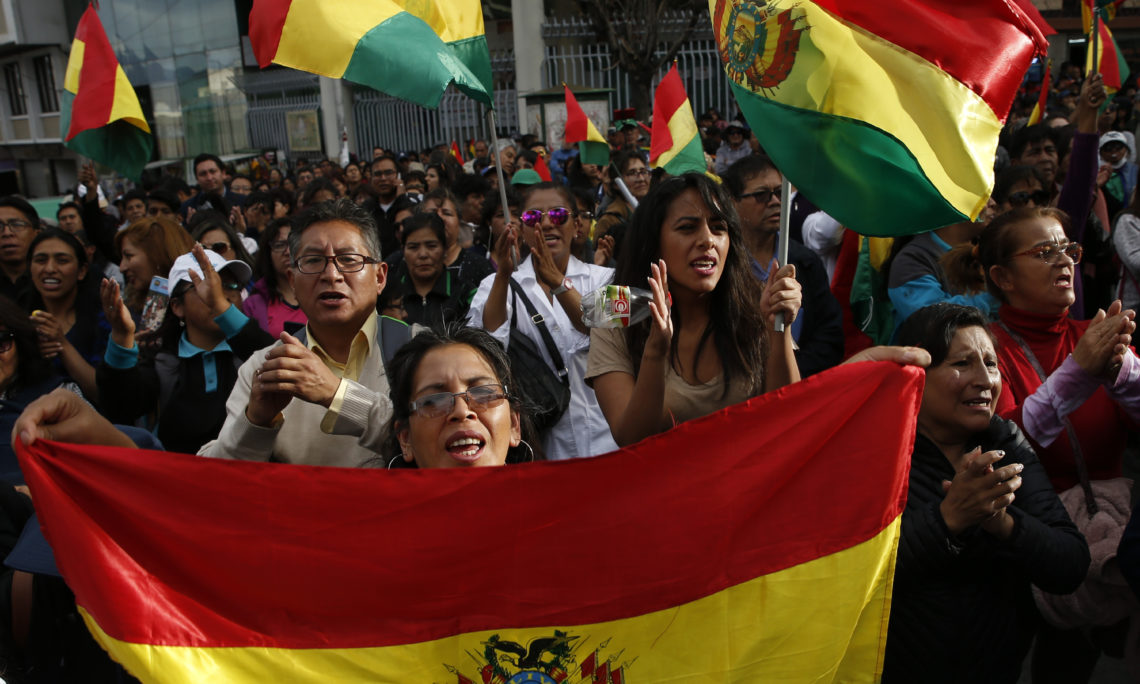 Remarks by Ambassador Carlos Trujillo
Permanent Representative of the United States to the OAS
at the Special Meeting of the Permanent Council on Bolivia
November 12, 2019

Madame Chair, the United States is very pleased that the OAS Member States are meeting to discuss the situation in Bolivia. The OAS stands for representative democracy, and it is fitting that we are here today when the democratic system in one of our member states, Bolivia, is threatened. The United States will make six brief points.

First, we salute the courage and strength of the Bolivian people who protested against a government trying to steal an election. They face danger, and they still face danger as they fight for democracy and free, fair and democratic elections. We also salute the restraint shown by the police and the armed forces. They have been loyal to their constitution, and they are also supporting the constitutional process in Bolivia.

Second, we honor the work and the expertise of the OAS. The OAS Electoral Observation Mission identified serious irregularities in the conduct of the October 20 election. At the invitation of the Bolivian Government, a separate OAS team followed up to conduct an analysis of the electoral process, often referred to as an audit of the election. Despite the difficulty of their mission, and doubts even by the opposition, they persevered and found conclusive proof of election fraud, such as forged signatures in electoral records and the presence of an unauthorized internet server interfering with the vote count. Other organizations involved in the process have confirmed these irregularities, including a consulting firm hired by the Bolivian government itself to audit the election. This was clearly an attempt by the government to subvert the will of the Bolivian people.

Third, we reject the ridiculous claim that the legal nullification of a fraudulent election is somehow a coup. We would note that former President Morales actually resigned. Moreover, if there ever was a threat to the democracy, it was conducted by the Bolivian government, led by former President Evo Morales, and defended by Foreign Minister Pary in this very chamber, to overturn the will of the Bolivian people. The Bolivian people wanted to choose their President, as is their right in a democracy. The opposition insisted on free and fair elections, as called for in Bolivia’s electoral law. The police and armed forces remained admirably neutral and in support of the Bolivian constitution, as is their sworn duty. All of these groups were protecting Bolivia from a President desperate to maintain his power through election fraud.

Fourth, the United States notes the hypocrisy of OAS member states who claimed that they were supporting democracy and non-interference in Bolivian issues. These states give high minded speeches about the importance of democracy and how they are dedicated to non-interference. If they support democracy, they should support efforts to ensure a free and fair elections and to reveal election fraud. The principle of non-interference does not mean that states should just stand by and let a government conduct election fraud to maintain power. Incredibly, certain states have chosen to violate both principles. They opposed any effort to determine if Bolivia had conducted a free and fair election, and now they are intervening in support of the former government officials who planned and executed massive election fraud.

Fifth, the United States calls on all parts of Bolivian society, including former President Morales and his party, to refrain from violence and to restore calm. Former President Morales has called for resistance, which has resulted in violence and threats to the opposition. He must rescind this call for extrajudicial violence and intimidation. This is a very delicate and difficult situation. We call on all Bolivians to support the Bolivian transitional government, electoral reform, new free and fair elections, and the Bolivian laws and constitutional process.

Sixth, the United States calls for the OAS to play its role to assist the Bolivian government to reform the electoral system and to conduct free and fair elections so that the Bolivian people can chose their next government. The OAS has already provided invaluable service by identifying and documenting the election fraud that occurred in the October 20 election. The OAS has internationally recognized expertise on the electoral process, and can help the government establish impartial election authorities.

Finally, I would like to close by reading a statement from President Donald J. Trump regarding the resignation of Bolivian President Evo Morales: “The resignation yesterday of Bolivian President Evo Morales is a significant moment for democracy in the Western Hemisphere. After nearly 14 years and his recent attempt to override the Bolivian constitution and the will of the people, Morales’s departure preserves democracy and paves the way for the Bolivian people to have their voices heard. The United States applauds the Bolivian people for demanding freedom and the Bolivian military for abiding by its oath to protect not just a single person, but Bolivia’s constitution. These events send a strong signal to the illegitimate regimes in Venezuela and Nicaragua that democracy and the will of the people will always prevail. We are now one step closer to a completely democratic, prosperous, and free Western Hemisphere.”