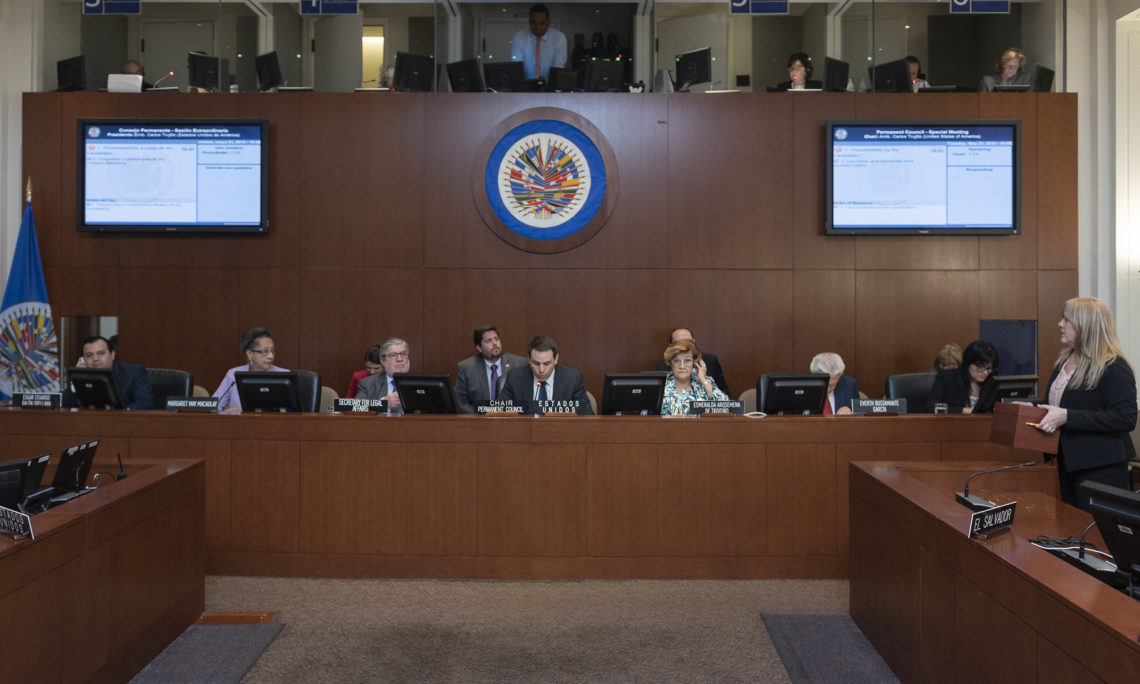 Ambassador Carlos Trujillo, Permanent Representative of the United States to the Organization of American States (OAS), presides as Chair of the OAS Permanent Council, May 21, 2019. (OAS Photo)

Mr. Chairman, the OAS and the OAS Member States have been enormously patient with the Ortega regime hoping that it will meet its commitments under the Inter-American Democratic Charter and its promises to conduct effective dialogue. I remind you that peaceful protests began April 18, 2018, more than one year ago. This hardly constitutes haste or hurry to arrive at any particular conclusion.

During that time, the OAS Working Group has had dozens of meetings, hearing from many different sectors of Nicaraguan society. The Working Group has sought to visit Nicaragua to ascertain the situation first hand. The Ortega government refused to allow the fact-finding visit, or even to meet with the working group.

Instead, the Ortega government expelled the Inter-American Commission’s monitoring mechanisms, clear evidence of the Nicaraguan regime’s wanton disregard for international mechanisms designed to promote human rights, rule of law, and democracy that it has agreed to support as an OAS member state.

The OAS has held multiple Permanent Council meetings, heard reports from Secretary General Almagro, the Inter-American Commission for Human Rights, and many outside legal experts. We have heard exhaustive expert testimony.

At no time has the Nicaraguan government or its defenders ever offered any independent expert to deny the mountain of evidence accumulated through the Working Group and the Permanent Council and has only replied with uncorroborated, political rhetoric aiming to mislead the international community.

Mr. Chairman, the patience of the OAS should not be infinite.

At each step of the way, we have interpreted the Nicaraguan government’s actions in the best possible light, hoping they were serious about meaningful dialogue and honoring basic human rights.

What has the OAS and OAS Member States gotten for all of our patience and good will? Not much. The Ortega government has simply used the international community’s hopes to feign an interest in dialogue, to play for time, and to use that time to crush the opposition in the streets.

Colleagues, I know that many of you hoped that dialogue could be successful to achieve a political solution in Nicaragua. We did too.
Although we may hope for and support dialogue, we must also be realistic about what is happening in Nicaragua.

Two events make it clear that the Government is playing for time and that the OAS and OAS member states must increase diplomatic pressure to force the Ortega regime to become serious about dialogue and to resolve its political issues.

First, the killing of U.S. citizen Eddy Montes last week, which further demonstrates the escalating breakdown of constitutional order and rule of law in Nicaragua. Mr. Montes was a political prisoner in Nicaragua, and he was held for seven months without facing formal charges. He was never provided due process as required under Nicaraguan law.  Instead, he died under suspicious circumstances. The government of Nicaragua’s lack of justice, due process, transparency, and respect for fundamental freedoms has impeded all good faith efforts at dialogue and reconciliation.

His death underscores the urgent need to release the hundreds of other political prisoners facing nearly identical circumstances.

The Ortega government continues to repress protesters and deny Nicaraguans their fundamental rights of assembly and free speech, going so far as to impede and repress Nicaraguans mourning the death of Mr. Montes this past weekend.

Reports of renewed detentions, torture of prisoners, and other abuses also increased this weekend.

Second, just yesterday the Civic Alliance announced that it would withdraw from the dialogue since the government had not fulfilled its promises, particularly as to the unconditional release of political prisoners in accordance with the bilateral agreement with the International Committee of the Red Cross.

Colleagues, I know that we hope for real political dialogue, but the Civic Alliance understands that the Ortega regime is not serious. They cannot even fulfill their own promises. Yes, the government periodically releases some political prisoners to house arrest, as it did yesterday in response to the action by the Civic Alliance.

But this does mean it is holding up to its promise. Those who have been released to house arrest are still considered criminals; they are not free to exercise their rights, and they can be thrown back into prison at any time. And hundreds more remain in prisons under terrible conditions and with no due process.

With these points in mind, the United States supports taking action within the OAS, through this Council and through the General Assembly, consistent with the terms of the Inter-American Democratic Charter.

As we made very clear during our two Special Council sessions, we need to act expeditiously on the clear and compelling evidence that the Constitutional Order in Nicaragua has been unconstitutionally altered in a manner that seriously impairs the democratic order in that state.

The Ortega government’s continuing threats and intimidation campaign against perceived opponents constitute a direct infringement upon the “right and responsibility of all citizens to participate in decisions relating to their own development,” as articulated in the Democratic Charter.

The absence of justice, due process, transparency, and respect for fundamental freedoms in Nicaragua has further impeded all good faith efforts at dialogue and reconciliation.

The United States also continues to support the Civic Alliance of Nicaragua in its efforts to represent the interests of Nicaraguans advocating for freedom, justice, democracy, and change.

The OAS, the organization most firmly committed to the defense of democracy in the Western Hemisphere, must also support them in denouncing the Nicaraguan governments’ actions, and in setting clear expectations for the collective defense of democracy as reflected in the Inter-American Democratic Charter.

The United States urges all OAS member states to vote for the resolution today. The resolution was drafted to obtain the widest possible support. The resolution discusses our on-going collective assessment of the situation in Nicaragua, but does not draw any conclusions.

The resolution simply urges the parties to return to effective dialogue in good faith, and presses the government to fulfill the bare minimum to promote democracy and human rights.

Finally, the resolution advances the issue to the OAS General Assembly, our highest deliberative body, to consider this critical issue of democracy and human rights in our hemisphere.

After what has happened over the last year, and especially this last week, the OAS must do more.

Simply put, the United States strongly urges all OAS member states to champion the democratic values enshrined in the Inter-American Democratic Charter and we thank you.

(Adopted by the Permanent Council at its special meeting of May 21, 2019)

CONSIDERING the process and steps laid out in Articles 18, 19, and 20 of the Inter-American Democratic Charter and the ongoing collective assessment on the situation in Nicaragua; and

TAKING NOTE of the negotiation process between the Government of Nicaragua and the Civic Alliance for Justice and Democracy,

1. Reiterate the concern of the inter-American community for the deterioration of democratic institutions and human rights in Nicaragua and its support for a peaceful solution to the political crisis in that country;

2. Urge the parties to further effective dialogue in good faith, through the implementation by the Government of the following measures:

a) Unconditional release of all prisoners, by June 18th 2019, as agreed by the parties in the Mesa de Negociación. This release must have independent monitoring and verification mechanisms.

b) Allow the effective work of the IACHR and its mechanisms in Nicaragua, including the MESENI, and assure them all the guarantees necessary for the fulfillment of their mandate.
c) In collaboration with the Department of Electoral Cooperation and Observation, initiate institutional measures necessary to ensure free, fair, transparent, and legitimate elections in accordance with international standards, with the presence of independent electoral observers, including the OAS.

d) Ensure freedom of expression and the press, allow the exercise of the right to demonstrate peacefully, stop arbitrary detentions, and guarantee the independent work of human rights defenders and organizations.

e) Guarantee the return and safe stay, without reprisals, of all the people who were forced to leave Nicaragua as a result of the current crisis.

3. Advance the collective assessment of the situation in Nicaragua, consistent with the Inter-American Democratic Charter, and bring this issue forward to the General Assembly in June 2019.