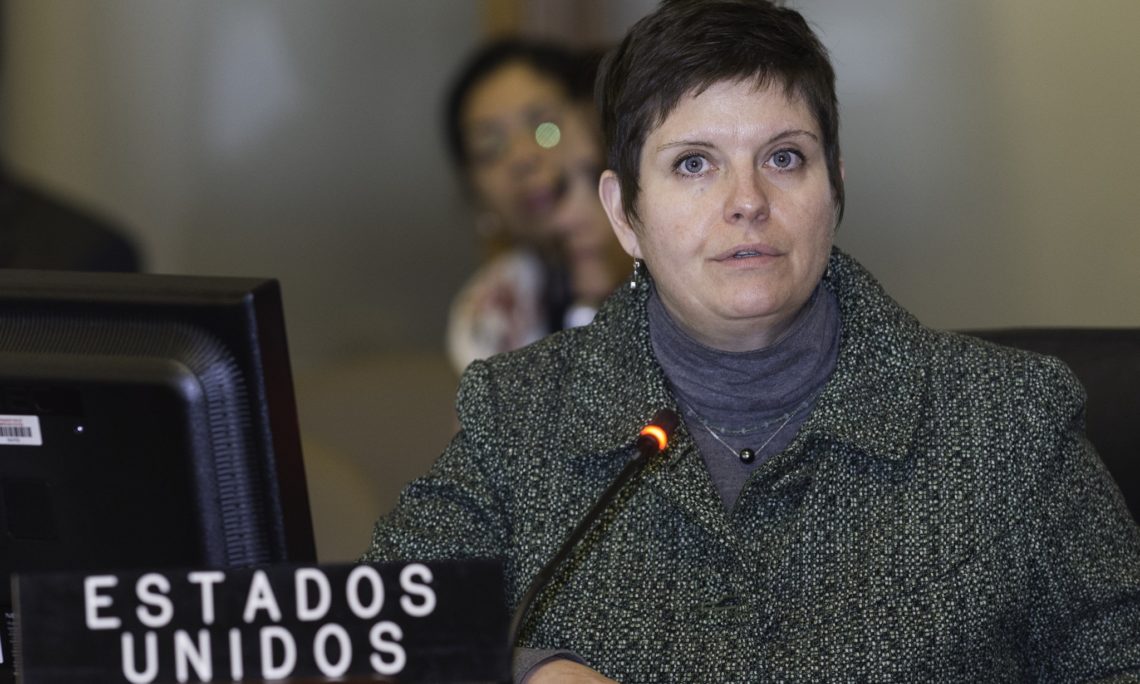 Acting United States Deputy Chief of Mission Genevieve Libonati addressed the gathering on behalf of the delegation of the United States. (OAS Photo)

On December 6, 2017, the OAS Permanent Council of the Organization of American States (OAS) held a special meeting at OAS headquarters in Washington DC, on the subject “Addressing Violence against Women in the Americas.”  Acting United States Deputy Chief of Mission Genevieve Libonati addressed the gathering on behalf of the delegation of the United States. (OAS Photo)

Thank you, Madam Chair for bringing this important issue before us today.

We also thank the speakers, Minister Choquehuanca, Commissioner Macauley, and Dr. Hennis, for their thought provoking and compelling presentations. The United States is firmly committed to defending the rights of women and girls to live free from violence.

As we heard, worldwide, one in three women will experience violence in her lifetime. Given the costs violence poses to individuals, families, communities, and economies, this is a statistic we cannot ignore.

On November 25, as already mentioned here today, the global community marked the International Day for the Elimination of Violence against Women and began the “16 Days of Activism against Gender-based Violence.”

The United States has been very active during this time, which focuses us all on the scourge of violence against women, including child and forced marriage, domestic violence, and all forms of human trafficking.

We know that violence against women and girls undermines global peace and security. It weakens the social fabric that binds families and communities together and prevents countries from achieving social stability and economic development.

Nearly two decades after the United Nations General Assembly established the International Day for the Elimination of Violence against Women, we continue to recognize that violence against women remains a persistent threat and an obstacle to achieving women’s equality.

The United States is especially alarmed by violent extremist groups’ use of violence against women as a tactic of terror to suppress women, recruit terrorists, and stigmatize communities.

We denounce terrorist organizations’ use of forced conscription, sexual exploitation, and abuse, including sex trafficking of women and girls.

The United States will never waver in its support for women’s equality. In partnership with governments, international organizations, and civil society around the world, we will continue to work to end violence against women and girls globally and to ensure that women and girls have equal rights and opportunities.

On December 4, our Deputy Secretary of State delivered remarks, following a panel discussion on the efforts of the United States and civil society partners to engage men and boys to break the cycle of violence against women and children.

At that event, the State Department launched “Voices Against Violence,” a public private partnership with the Avon Foundation that provides a new approach to combating gender-based violence, especially in areas of conflict.

Also last week, we participated in the Trilateral Working Group on Violence Against Indigenous Women and Girls in Ottawa, with representatives from Canada, Mexico, and the United States. This year, indigenous women leaders from all three countries attended the event as full partners in order to ensure that their voices and perspectives shape the discussion. Their participation is also seen as a critical example of the need for national governments to partner with indigenous peoples.

We believe that engaging men and boys as partners in the efforts to prevent and respond to gender-based violence is key to ending the suffering that affects millions of men, women, and children around the world.

In our hemisphere, we are highlighting innovative efforts the Department of State has taken to address how technology, human rights, and gender equality intersect.

Earlier this year, nearly 1,200 people came together from across the Western Hemisphere to talk about how to harness the power of technology to prevent and respond to violence against women and girls using digital tools.

The U.S. Department of State, together with representatives from Google, Twitter, Univision Washington, and Zoom Latino, partnered with civil society experts to launch a series of three interactive, Spanish language webchats focused. The #TecnologiaTransformadora series explored various challenges, opportunities, and tools to address gender based violence as it is experienced in both online and offline spaces.

In the Western Hemisphere, women and girls are disproportionately affected by conflict and violence and must be equal partners in, and beneficiaries of, the pursuit of peace and security.

Violence against women, particularly domestic violence and femicide, is an obstacle to security and development in the region. Combatting transnational organized crime and violence can only be achieved with comprehensive policies that address the impact of violence on the most vulnerable populations, including women and girls. Although many countries in the region have passed laws and created public services intended to protect the rights of women, implementation and enforcement still present obstacles.

Women and girls with disabilities as well as indigenous, African descendent, lesbian, and transgender women and girls often face multiple forms of discrimination, making them even more vulnerable to insecurity when conflicts arise.

Participation of women and girls from all backgrounds in security efforts is essential to ensure effectiveness and long-term security.

Effective diplomatic engagement on a sensitive topic like violence against women often starts with acknowledging that addressing this form of violence is a challenge in every country, including the United States.

Progress is achievable by working together across borders and in tandem with civil society, governments and the private sector.

Because we can all benefit from sharing unique experiences and best practices in addressing violence against women, the U.S. approach to preventing and responding to such violence globally is founded on the principle of collaboration and exchange.

To this end, on the International Day for the Elimination of Violence against Women and throughout the 16 Days of Activism, we hope all OAS member states will to continue to work together in our shared responsibility to end violence against women.