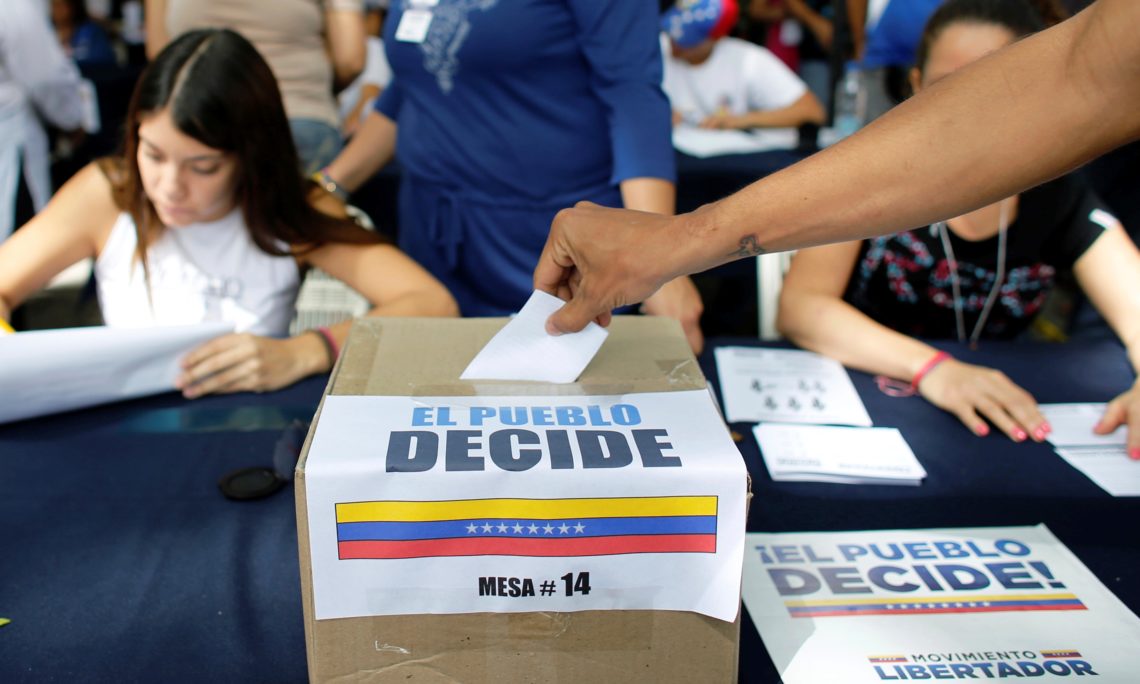 A man casts his ballot at a poll station during a symbolic referendum in Caracas, Venezuela, Sunday, July 16, 2017. Venezuela's opposition called for a massive turnout Sunday in a symbolic rejection of President Nicolas Maduro's plan to rewrite the constitution, a proposal that's escalating tensions

Mr. Chairman, my delegation would like to begin this afternoon by thanking you for including this topic on the agenda of today’s Council meeting.  The situation in Venezuela could not be more timely or relevant for this Council’s consideration.

Over the last 19 months, we have all witnessed the steady erosion of constitutional rule in Venezuela, from disputes over the National Assembly’s make-up and powers, to the thwarting of the recall referendum late last year.

The Supreme Court’s assumption of basic legislative functions, the ongoing imprisonment of opposition leaders, and the continued violent repression of peaceful protests are also unmistakable signs of Venezuela’s continued descent into authoritarian governance.

The July 5 attack on members of the National Assembly should be deeply concerning to all of us, as it was to the Secretary General.  This brutal assault by armed supporters of the government of President Maduro on duly elected representatives of the Venezuelan people inside the National Assembly building, under the watchful gaze of security forces, was perpetrated on the very day of Venezuela’s independence.  It represented not just an assault on Opposition politicians, but rather on democracy itself.  One cannot help asking what Simon Bolivar, whom we are honoring today, would have to say about this betrayal of his legacy.

Mr. Chairman, the United States also deplores the convocation and implementation of a National Constituent Assembly that is clearly designed to undermine – not strengthen — Venezuela’s democratic institutions.

There should be no doubt amongst us that this Constituent Assembly process does NOT enjoy the support of a majority of Venezuela’s citizens.  The recent plebiscite vote of July 16 represented a remarkable and massive repudiation of this effort.  Over seven million Venezuelans voted to reject a process that will at no point involve a proper popular consultation and is instead intended to turn their country into a one party dictatorship.

Mr. Chairman, these millions of voices must not be ignored by our Council or our Organization.  We should instead recognize the courage, ingenuity, and persistence of the Venezuelan people in valiantly defending their democratic institutions.

The United States shares concern about the growing threat to democratic institutions in Venezuela expressed by numerous voices from across Venezuela’s political spectrum — and also by leading democracies from across the Americas.

We join with many of these governments today – in the statement read by my colleague from Panama — in calling on President Maduro to abandon the Constituent Assembly process and focus instead on good faith negotiations to resolve Venezuela’s deepening crisis.

Mr. Chairman, U.S. actions will continue to support the aspirations of the Venezuelan people as they seek to preserve their democracy and to promote governance more responsive to their basic needs.

Rather than pursing its current undemocratic and autocratic path, the United States urges the government of Venezuela to live up to commitments made in the Vatican-supported dialogue process last fall.  These include:

We also join the renewed calls of the independent Inter-American Commission on Human Rights to the Government of Venezuela to comply with its international human rights obligations.  We encourage the Commission to provide this Council with an update regarding its most recent period of sessions in Lima, which included a focus on the situation in Venezuela.

Let me be quite clear: the United States fully respects Venezuela’s sovereignty and independence.  Nevertheless, we, as part of the hemispheric community of nations, cannot stand by as human rights are trampled and as citizens are arrested and attacked for expressing their opinions.

As the events of the past month demonstrate, not only have we witnessed “unconstitutional alterations of the constitutional regime that are seriously impairing the democratic order” in Venezuela, but the crisis is increasingly impacting our entire region.  Venezuelans are pouring across borders in search of food, medicine, and safety, and seek asylum in ever greater numbers.

Mr. Chairman, as you know well, this Council — and this Organization — has attempted to offer a helping hand to the Venezuelan government on numerous occasions.  This reflects the reality that the OAS remains the best forum for our entire region to express concerns, offer assistance, and make recommendations.

The OAS has many valuable tools at its disposal which we can and should utilize – from fact finding visits to the use of good offices.

Now is the time to deploy these tools, so that all of us can take meaningful action to address the situation in Venezuela.  To this end, the United States reaffirms its support for the establishment of a mechanism — such as a contact group or group of friends — to help the people of Venezuela return to peace, prosperity, and full rule of law.

Mr. Chairman, I would also like to recognize Secretary General Almagro for his ongoing efforts to hold the Venezuelan government accountable to its commitments to promote democracy and respect human rights.  We welcome his continued focus on the status of political prisoners — as well as on the increasing levels of infant mortality, malnutrition, corruption, and chronic illness in Venezuela.

With this in mind, Mr. Chairman, the United States remains hopeful that the OAS can come to a clear and timely consensus on the way forward in Venezuela, so we can all work together as the democratic community of nations that this organization represents to the world.

In conclusion, Mr. Chairman, as Secretary of State Tillerson recently stated, “the United States joins friends of Venezuela across the Americas and around the world in supporting a peaceful, democratic, and comprehensive solution.”  Thank you very much.

JOINT DECLARATION ON THE SITUATION IN VENEZUELA

Express our profound concern for the serious alteration of the democratic order in Venezuela, the worsening crisis, and the increase in violence.

Call urgently for the absolute respect for human rights, and constitutional order, including the separation of powers, and, in this regard, condemn the attack on the National Assembly and other acts of violence.

Urge the government of Venezuela to suspend the National Constituent Assembly process, which would mean the definitive dismantling of the democratic institutional framework and would run contrary to the popular will expressed in the public consultation on July 16.

Declare our willingness to support initiatives to address the most urgent economic, social, and humanitarian needs, especially the delivery of food and medicines.

Express anew the importance of establishing as soon as possible a group or other facilitation mechanism to support a process of dialogue and negotiation between the government and opposition as a means to contribute to the reestablishment of the democratic order in Venezuela, and to accompany and promote the timely fulfillment of commitments undertaken by the parties.