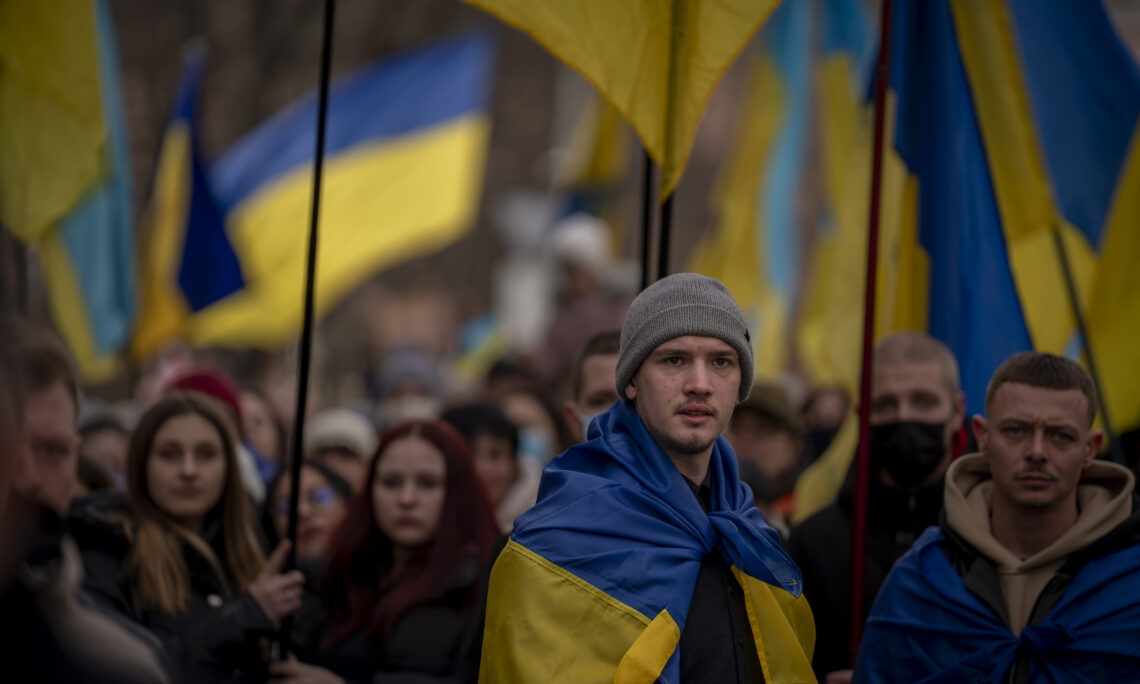 Thousands of demonstrators march in Odessa, Ukraine, Sunday, Feb. 20, 2022 in a show of unity. Waving national flags and placards, people said they had come out to demonstrate against a Russian invasion, and said that they were prepared to defend their city. (AP Photo)

Chairman, thank you for coordinating this vital session of the Permanent Council as the situation in Ukraine rapidly evolves.

To start,  it is no accident that I am wearing blue and yellow today. These are the colors of the Ukrainian flag, and our thoughts and prayers are with the people of Ukraine as they face off against Russia’s illegal, unprovoked, and completely unjustified attack.

As President Biden said: “President Putin has chosen a premeditated war that will bring a catastrophic loss of life and human suffering.  Russia alone is responsible for the death and destruction this attack will bring.”

We – as a democratic Hemisphere – must stand united against Russia’s unprovoked invasion of Ukraine, and we must continue to condemn it in the strongest possible terms.  Russia’s action are a violation of international law and of the global norms that we – as an international community – have all pledged to respect.

Let us be clear – as we witness a large-scale land war in Europe for the first time since WWII – Russia is the sole aggressor in this crisis.  After months of a relentless military buildup on Ukraine’s borders and hybrid warfare to destabilize Ukraine from within, Russia followed exactly the script we expected.

Let us not mince words:  Vladimir Putin is a revanchist dictator bent on conquest.  His goal is nothing less than the recreation the Soviet Russian empire.

We have a message for Mr. Putin:  this is not  1822 or 1922.  The Age of Imperialism is long gone.  Ukraine is a free, sovereign, and independent state, and the Ukrainian nation will continue to exist regardless of Putin’s efforts to crush it.

The consequences of Russia’s aggression will be felt for years to come.  Ukrainians will fight for their country, just as you and I would fight for our own, regardless of the odds.  Ukraine will not give up its sovereignty without a fight, nor should it.

Regardless of who eventually comes out on top, there will be death and destruction on a massive scale.    Russia, and Russia alone, must be held responsible for this tragedy.

Ukraine’s neighbors will face a humanitarian emergency as refugees pour across their borders.  International peace and security are in jeopardy, and the global economy weakened.  The implications of Russia’s decision to launch a war of conquest against its peaceful neighbor will reverberate globally, affecting us all, including those in our Hemisphere, for years to come.

We urge all countries in the Hemisphere to join us in strongly and publicly condemning Russia’s  aggression and affirming  our support for Ukraine.  We ask that you call on Russia through every possible channel to cease its hostilities.

We must remain united in our message to Russia:  the territory of a sovereign state cannot be seized by force of arms.   Borders cannot be redrawn at gunpoint.  Russia’s military aggression is illegal and unacceptable to the civilized world.

We call on all democratic countries to press Russia to halt its military operations in Ukraine immediately, return its troops and equipment to Russia, and cease all further aggression against Ukraine, including its ongoing cyber attacks.

THE SITUATION IN UKRAINE