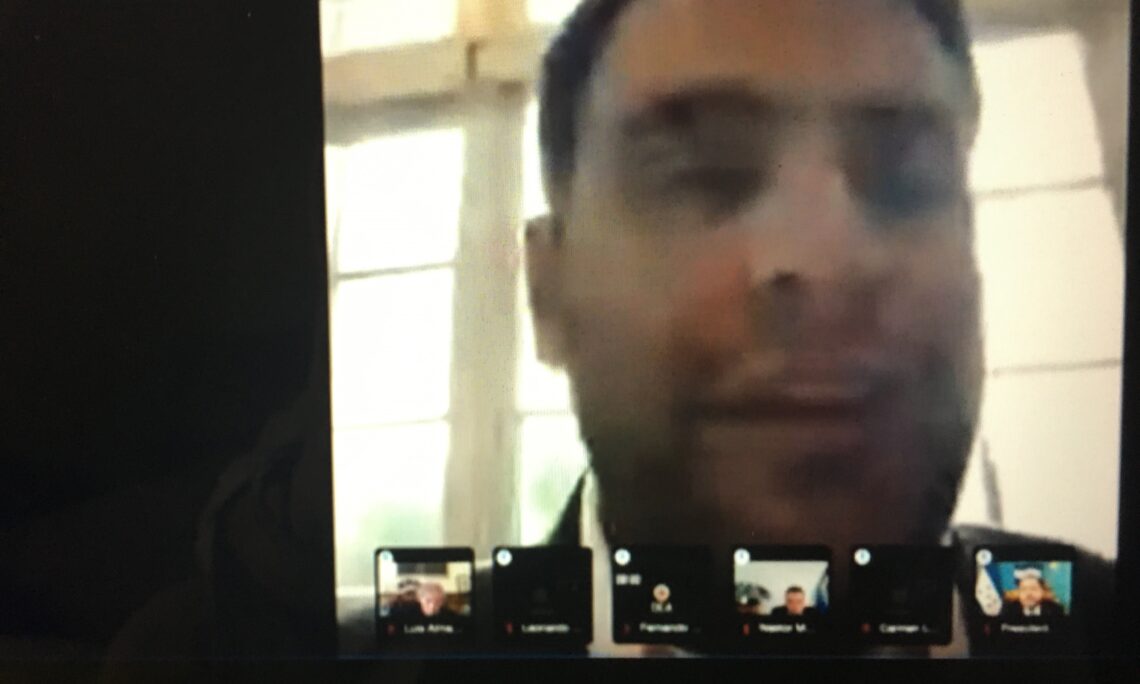 Mr. Chair, the United States thanks the presenters for their work and their insightful and persuasive presentations. After these presentations there can be no doubt that the brutal control by illegitimate Maduro regime has resulted in massive human rights violations. Their report notes the illegitimate Maduro regime’s systematic decimation of Venezuela’s democratic institutions and disregard for rule of law fomented an environment of impunity.

Similarly, the evidence is also clear that Maduro has engaged in ongoing electoral fraud to undermine the last democratic institution in Venezuela, the National Assembly.

The only real question is what OAS member states are going do about it. In the words of Pete Townsend, we hope that the OAS “won’t get fooled again.”

Let’s briefly review just a few of the reports of massive and systemic human rights violations in Venezuela perpetrated by the Maduro regime.

In 2018, the OAS Panel of Independent International Experts concluded, “the development of a policy that turned the country into a theater of military operations. The opposition, and those identified as such, were branded the “internal enemy” of the State, turning large segments of the civilian population into targets for the military, paramilitary, and regular security forces…at least since February 12, 2014, widespread and systemic attacks against the civilian population in Venezuela have been carried out according to a State policy to suppress views and opinions that dissent from those of the Government of Nicolas Maduro.”

We are proud to recall that the OAS was at the forefront of international efforts to hold the Maduro regime to account for its abuses, and that many of the elements detailed in the OAS Panel’s report have been validated over the past two years. The ongoing work of the Inter-American Commission on Human Rights, has also served to amplify many of the claims and facts presented in the 2018 report.

Similarly, in July 2020, the UN High Commissioner for Human Rights Michele Bachelet reported at least 6,856 suspicious deaths and extra-judicial executions by government security forces that occurred between January 2018 and May 2019. Indeed, the Bachelet report also states that there have been at least 1,324 deaths by Maduro’s security operations in the first five months of this year. Furthermore, the 2020 Bachelet report notes nearly all 2019 report recommendations went unaddressed. The regime’s tragic pattern of abuse leaves no doubt Maduro has and will continue to flagrantly ignore international calls for a peaceful, democratic transition and will continue to kill, torture, and terrorize those who stand in his way.

Finally, we have heard the carefully documented evidence presented here to the Special Permanent Council today by members of the UNHCR Fact-Finding Mission on Venezuela that there are reasonable grounds to believe these killings and human rights violations can be directly tied to Maduro and his top officials. This report has once again underscored the brutal nature of the Maduro regime.

Mr. Chair and colleagues, do these sound like the actions of someone who is interested in putting the Venezuelan people first and upholding one of the pillars of democracy – the conducting of free and fair elections? Why would anyone expect that Maduro would accept defeat in a free and fair election? Just as the regime has refused visits by numerous credible human rights experts and bodies, it would be preposterous for us to think that it would accept credible international election observation.

Now let’s turn to Maduro’s on-going election fraud. The United States again thanks the experts for their timely and persuasive presentations.

Let’s look at the facts. Maduro claims he was re-elected in a thoroughly fraudulent 2018 Presidential election, which the OAS member states rightfully refused to recognize. Since then, Maduro created an extra-constitutional alternative to the National Assembly, the so called Constituent Assembly, packed with his supporters. He now controls the National Electoral Council to make sure that the vote goes his way. He controls the Supreme Court to ensure that they vote to support him, no matter what fraud he commits. He even infiltrated the opposition parties, coopting them so that the Venezuelan people have no democratic choice.

In response, the OAS took the historic decision to declare a clear violation of the Inter-American Democratic Charter, which continues to inform our actions today – and in the lead up to our next General Assembly.

Mr. Chair and colleagues, are these the actions of someone who is open to improving electoral conditions? Or is this the end game of an illegitimate regime which has spent years undermining Venezuela’s democracy, and now they are squared aimed at subverting the last democratic institution in Venezuela.

There has been some discussion over the possibility of postponing the parliamentary elections, currently scheduled for December 6. A mere postponement would not make the elections any less fraudulent.

Quite frankly, it is hard to understand how, in the face of such evidence, some people with the best of intentions still advocate for discussing this with the Maduro regime. How can they believe that he has any interest in holding free and fair elections, let alone accepting the result if he loses? I think that it is because they think that he is like them, valuing democracy and caring about the welfare of his people. The evidence shows he isn’t. He simply isn’t, and no amount of hope will change him.

So what can we do? The OAS can follow the same policy of diplomatic pressure and support for the brave democratic opposition inside Venezuela.

The OAS and its member states can be proud of our actions supporting democracy in Venezuela. We rightly rejected the fraudulent 2018 Presidential elections. We have condemned the harassment and arrest of opposition deputies in the National Assembly. We have decried the failed policies that have forced millions of Venezuelans to flee the country. We have called for protection of the courageous Venezuelan opposition. Best of all, at last year’s OAS General Assembly we rejected the illegitimate Maduro regime’s representatives from our democratic institution, welcoming instead the representatives appointed by the democratically elected National Assembly.

The OAS must maintain our strong support for Venezuelan democracy. The hour is getting late. Maduro has increased his violence and repression. This is no time for the OAS to back off or go soft. We must not get fooled again. We must approve a resolution in next month’s General Assembly every bit as strong as last year, when we accepted the National Assembly representatives “until new Presidential elections are held and result in the appointment of a democratically elected government.”