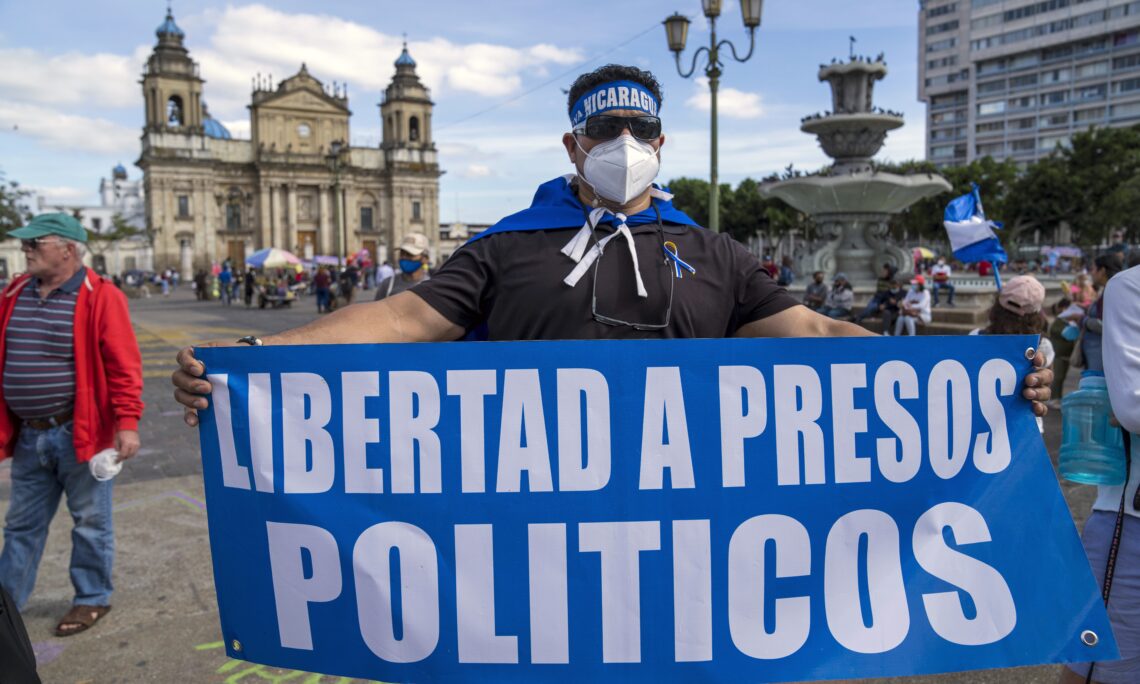 A Nicaraguan citizen holds a sign that reads in Spanish: "Freedom for political prisoners," during a protest against the Ortega-Murillo regime at the Constitution Square in Guatemala City, Sunday, Nov. 7, 2021.

Thank you, Foreign Minister Brolo, Secretary General Almagro, Excellencies, diplomatic colleagues, ladies and gentlemen.  The United States is heartened that so many OAS member states joined today’s resolution, a resolution that demands the release of political prisoners;  makes clear that the so-called elections of November 7 lacked any semblance of democratic legitimacy; and instructs the Permanent Council not only to assess the situation in Nicaragua, but to take further action as appropriate .

President Biden characterized the political exercise conducted in Nicaragua earlier this week as “a pantomime election that was neither free nor fair, and most certainly not democratic.”

The arbitrary imprisonment of nearly 40 opposition figures since May, including seven potential presidential candidates, and the blocking of political parties from participation rigged the outcome well before election day.   No one can dispute this fact.

It is shameful that this has happened in our hemispheres.  Because Nicaragua’s actions are contrary to the Inter-American Democratic Charter, OAS member states must keep the pressure on that country to change course and uphold the promise of democracy for its people.  We owe the people of Nicaragua our voices and our support during these difficult times.

Daniel Ortega and Rosario Murillo’s actions run contrary to everything this organization stands for:  democracy, human rights, security, and development. They have demonstrated that they do not respect either the OAS Charter or Inter-American Democratic Charter, and their actions must have consequences.

The would-be dynasty presided over by President Ortega and Vice President Murillo has shuttered independent media, locked up journalists and business leaders, and frightened civil society organizations into closing their doors.

Hugely unpopular and lacking any semblance of a democratic mandate, the Ortega-Murillo family rule Nicaragua as autocrats, no different than the Somoza family that Ortega and the Sandinistas fought to bring down four decades ago.

The United States stands in support of the inalienable right to democratic self-determination of the Nicaraguan people, and those of any other country in the hemisphere where popular sovereignty is compromised by the erosion of democratic norms, stifling of civil society, or violations of fundamental rights.

Chair, the Inter-American Democratic Charter obligates the hemisphere to stand up for the democratic rights of the Nicaraguan people, and we must uphold these obligations. We call on the Ortega-Murillo regime to take immediate steps to restore democracy in Nicaragua, and to immediately and unconditionally release those unjustly imprisoned for speaking out against human rights abuses and demanding the right  to vote in free and fair elections.

Until this happens, the United States will use all of the diplomatic and economic tools at our disposal to support the people of Nicaragua and hold accountable the Ortega-Murillo government .  The Nicaraguan people deserve nothing less.

As OAS member states and citizens of the Americas, we have an opportunity and an obligation to find a path forward under the Inter-American Democratic Charter.

We know there are no easy answers. We must resolve to make hard choices and uphold the obligations OAS member states signed onto  20 years ago.

The United States remains steadfast in its support for the principles  of  the Charter and the aspirations of all the people of the Americas who are demanding democracy in their countries, whether they live in Nicaragua, in Venezuela, in Cuba, or any other country where human rights and the rule of law are threatened by authoritarian rulers. .

THE GENERAL ASSEMBLY OF THE ORGANIZATION OF AMERICAN STATES

RECALLING the Inter-American Democratic Charter, which states that “the peoples of the Americas have a right to democracy and their governments have an obligation to promote and defend it”;

CONSCIOUS OF the resolutions and mandates, adopted since 2018, urging maintenance and strengthening of democratic institutions and human rights in Nicaragua, and of the many efforts by the OAS to engage constructively with the Government of Nicaragua in order to assist with political dialogue and electoral reform;

DEEPLY CONCERNED that the Government of Nicaragua has disregarded all recommendations of the OAS and, according to authoritative reports from the Inter-American Commission on Human Rights and the United Nations High Commissioner for Human Rights (OHCHR), has harassed, restricted and arrested candidates, parties, independent media and civil society in the elections process in contradiction to Articles 2 and 3 of the Inter American Democratic Charter;

ALARMED at the findings of the IACHR, in its report, “Nicaragua: Concentration of Power and the Undermining of the Rule of Law”, published on October 25th, 2021, which states that “a police state was also established” through repression, corruption, electoral fraud and structural impunity designed by the Government to achieve its “indefinite perpetuation in power and maintenance of privileges and immunities”;

1) To deplore that the diplomatic and technical initiatives undertaken since June 5, 2018, by the Organization of American States, to promote representative democracy and the protection of human rights in Nicaragua have been unsuccessful because they were ignored or rejected outright by the Government of Nicaragua

2)  To declare that, in the evident circumstances, the elections on November 7 in Nicaragua were not free, fair or transparent and have no democratic legitimacy;

3) To conclude that, based on the principles set out in the Charter of the OAS and the Inter-American Democratic Charter, democratic institutions in Nicaragua have been seriously undermined by the Government;

4) To reiterate its previous calls for the release of all political candidates and political prisoners, the restauration of their democratic rights, and an immediate end to the arrest and harassment of independent media and members of civil society.

5) To instruct the Permanent Council to undertake an immediate collective assessment of the situation, in accordance with the Charter of the Organization of American States and the Inter-American Democratic Charter, to be completed no later than November 30 and to take appropriate action.