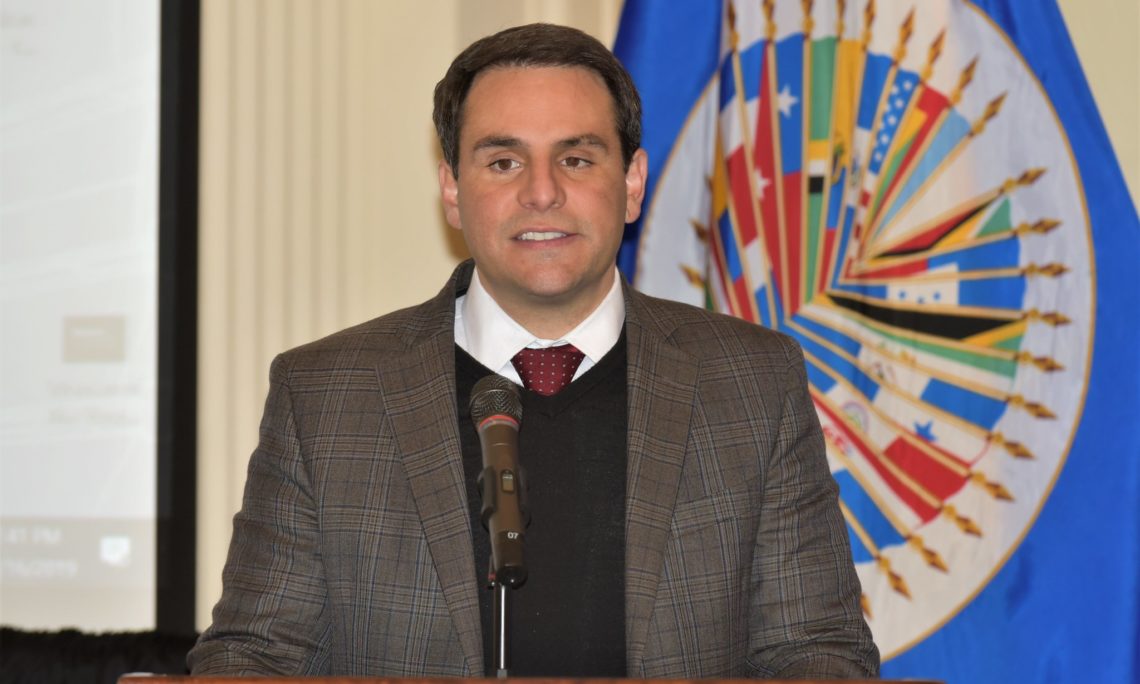 Ambassador Carlos Trujillo, Permanent Representative of the United States to the Organization of American States addresses the conference in the OAS Hall of the Americas. (OAS Photo)

Good afternoon. It is an honor to be with so many of you today to draw attention to the extraordinary tragedy of modern-day slavery in the Americas.

The testimonies you will hear today on the part of the Cuban doctors serve as sources for grave concern over trafficking in the Cuban Medical Missions programs around the Hemisphere and the world.

These powerful stories of injustice should move you and the organizations and countries that you represent to action.

In the 21st century, in a region marked by freedom and democracy – considered by Freedom House as second only to Western Europe in the levels of freedom and human rights – the Communist Cuban regime’s actions in the Americas are intolerable and profoundly unacceptable.

Although Cuba’s medical missions are oftentimes seen through rose-colored glasses by the media and host governments, the damage and abuse incurred on part of the Cuban doctors themselves cannot go unnoticed. Making sure this abuse does not go unnoticed is part of the important work we have ahead of us today.

The United States Trafficking Victims Protection Act defines labor trafficking as the “recruitment, harboring, transportation, provision, or obtaining of a person for labor or services, through the use of force, fraud, or coercion for the purpose of subjection to involuntary servitude, peonage, debt bondage, or slavery.”

The reports and stories shared by Cuban doctors at events such as this one – as well as in the media – share common elements of coercion into participating in these programs and engaging in activities not consistent with their job description such as falsifying statistics and political propagandizing.

Thus, Cuba’s programs are clear instances of trafficking in persons.

The abuses reported by doctors in these programs include payment of a small fraction of the doctors’ stipulated salaries, withholding doctors’ payments altogether, confiscation of passports by host governments, destitute and unsanitary living and working conditions, and sexual harassment facilitated by Cuban members of the medical teams.

Cuba has also effectively separated families and disavowed them the opportunity to reunite until completion of the mission. Countries where these abuses are reported to occur include, but is not limited to, Angola, Brazil, Guatemala, Qatar, and most egregiously in Venezuela.

The allegations of coerced labor, withholding of payment, inability to see family, and deplorable working conditions in Cuba’s medical missions serve as points for these to be condemned on a widespread scale. However, words are not enough.

The Cuban regime must know that its atrocious exploitation of its citizens will face international censure.

On September 11, 2001, the member states of the Organization of American States came together and signed the Inter-American Democratic Charter affirming “the promotion and protection of human rights is a basic prerequisite for the existence of a democratic society.”

Article 10 of that Charter underscores that “the promotion and strengthening of democracy requires the full and effective exercise of workers’ rights and the application of core labor standards.”

Some have accused the OAS of having lost relevance, of being broken, of not taking action on significant issues for the United States and for the region.

However, recent history shows that with key leadership, willing partners, and a united mission, the OAS is a critical force for good in advancing freedom and democracy, human rights, and the rule of law in the Americas.

I believe it’s important to underscore that with the right legal tools and political will, Western Hemisphere countries have incredible opportunities to work together and advance freedom in the region.

On Cuba, the OAS has taken new and important efforts to shine a light on the Cuban regime’s restrictions on its citizens’ political, economic, social, and religious freedoms, but we all must do more.

We value the focus of Secretary General Almagro on Cuba, and recognize also the ongoing monitoring and petition-based efforts of the Inter-American Commission on Human Rights, which is now working to finalize a new country report on Cuba.

With these efforts in mind, I believe we should continue to raise the travesty of the Cuban regime’s role — and ongoing efforts in the region to achieve justice for the Cuban doctors who have suffered.

Both the human rights and disruptive political aspects of these programs are a source of major concern for the OAS, and should be for the world at large.

With this in mind, I would like to thank the Cuban doctors who are here today for coming forward and providing testimony to the harsh and unfortunate reality they endured under the auspices of the Cuban regime.

The United States government recognizes it is extremely difficult to speak out against an institution and a regime that prides itself on using fear as a tactic to control and subjugate its citizens.

We understand this is done at great risk to yourselves and your families. So thank you again for being here today and speaking your truth.

In conclusion, friends and colleagues, I want to reiterate that the US government and the OAS prioritize respect for international human rights and labor standards across the globe.

We urge all nations engaging with Cuba to do the same, by denouncing actions taken by the regime in order to ensure accountability on part of a regime that lacks dignity for its citizens.

Through a concerted cooperative effort, I am optimistic about curbing the human rights violations and political disturbances perpetuated by the Cuban doctors programs.

I urge everyone here today to take this message back to your families, communities, and countries, and let’s work together to hold the Cuban regime accountable for its actions. Thank you very much.