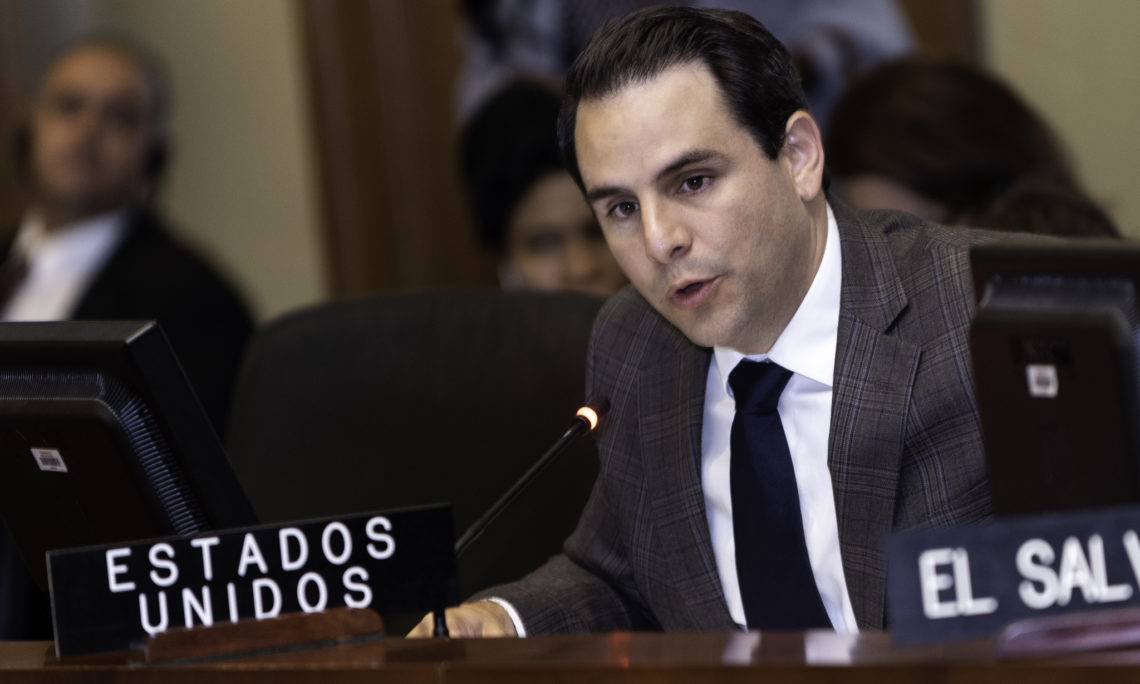 Thank you Madam Chair for convening another Special Session of the Council. We have an obligation to respond to the rapidly deteriorating situation in Nicaragua.

The situation is worsening day by day. This continues despite the growing international condemnation of the ongoing, government-sanctioned violence and intimidation campaign against the Nicaraguan people.

The new violence has been characterized as an “unprecedented bloodbath” by observers and this Council cannot ignore it.

The United States condemns the ongoing attacks by President Daniel Ortega’s para-police forces against university students, journalists, and clergy across the country — in addition to the arbitrary detention of Civic Alliance leadership and threats against those who support them, including the arbitrary detention of Medardo Mairena and Pedro Mena.

We likewise condemn the passage on Monday of a law against “terrorism” and money laundering which we fear will be used during the current crisis to arrest and prosecute those who are expressing their legitimate desire for political change — as well as to target peaceful, non-governmental organizations engaged in valuable work. Further, this Friday, July 19, is the 39th anniversary of the Sandinista Revolution that toppled the dictator Anastazio Somoza.

We will also be watching those who do not participate, and who do not allow their professional loyalty to be abused by a corrupt leadership seeking to cling to power through brutal means.

Every additional victim of this escalating violence and intimidation campaign further undermines President Ortega’s legitimacy. So we call yet again on Ortega to cease immediately his repression of the people of Nicaragua. Only then can Nicaraguans begin to plan a brighter future.

While the severity of this violence has taken some in this Council by surprise, this crisis has been years in the making.

Sadly, we are now experiencing the direct product of the hollowing-out of democratic institutions and consolidation of powers under President Ortega and Vice President Murillo.

The current government has disregarded the rule of law, basic tenets of democracy, and international commitments to protect human rights and fundamental freedoms in favor of “pacts” where they allocated the political and economic spoils of dictatorship with other groups.

So we meet again today to renew our commitment to work together to assist Nicaragua overcome an increasingly dire situation.

This body has taken decisive action, Madam Chair and fellow colleagues. Now more than ever, the world’s eyes are focused on how we — as the OAS — respond to the crisis in Nicaragua. Today is our moment to respond — through pragmatic and forward-leaning action.

The text reaffirms that we all are committed to working together on a grave matter of concern — as members of this Organization, as friends of the Nicaraguan people, and in solidarity with their democracy.

We strongly agree with the text’s appropriate condemnation of the ongoing violence and the Nicaraguan government’s intimidation campaign against its own citizens and church officials.

Despite the Nicaraguan government’s cynical efforts to disguise the truth, we know that the escalating violence is being perpetrated by government forces and government supporters, who are attacking religious leaders — including those whom the government earlier invited to mediate the current conflict — as well as students and other ordinary citizens exercising their right to protest.

We know this because the Inter-American Human Rights Commission on the ground has documented this reality in great detail based on eyewitness accounts and recordings. Church leaders, independent media and other credible observers, including many of our own diplomatic missions, have also confirmed this grim reality.

We must express very clearly that violators and abusers of human rights must be held accountable. And as member states, we must reaffirm our full support for the monitoring and investigative efforts of the Inter-American Commission on Human Rights.

Madam Chair, the cessation of government-sponsored violence is a primary condition necessary to resume dialogue on democratization and a peaceful path forward for all Nicaraguans.

Despite the Nicaraguan government’s disingenuous claims to this Council, so-called “terrorists” are not to blame for the over 300 deaths in Nicaragua since April. Those responsible for the violence are the very security forces who have a responsibility to protect its citizens.

The United States supports efforts at genuine and inclusive dialogue as a way of guaranteeing respect for the will of the Nicaraguan people.

Let me underscore this point. The Nicaraguan government must heed the Nicaraguan people’s call for democratic reforms immediately.

Madam Chair, the United States supports the proposal for early, free, fair, and transparent elections made by Nicaragua’s broad-based Civic Alliance, as part of the National Dialogue process.

Early elections represent the best path back to democracy and full respect for human rights in Nicaragua. The OAS has an important role to play in this regard if there is political will to implement the recommendations of the 2017 OAS electoral mission.

The United States will continue to work with the international community and other partners in support of the Nicaraguan people.

We congratulate this Council for adoption of today’s resolution. Such action is fully in line with the commitments all of us have freely undertaken as OAS member states.

As Nelson Mandela, whose 100th birthday would have been today, put it so eloquently — “It is easy to break down and destroy. The heroes are those who make peace and build.”

Let us all heed those words today in this Council — with action. The world is watching Nicaragua, but it is also watching us.

(Adopted by the Permanent Council at its special meeting, held on July 18, 2018)

BEARING IN MIND the principles enshrined in the Charter of the Organization of American States, the Inter-American Democratic Charter, and the American Declaration on the Rights and Duties of Man, of which Nicaragua is a State party;

TAKING NOTE of the Central American Integration System’s (SICA) “Special Declaration on Nicaragua” of 30 June, 2018; and

NOTING with deep concern the situation confirmed by the Inter-American Commission on Human Rights (IACHR) in the final report on its visit to Nicaragua, from May 17 to 21, 2018, titled “Gross Human Rights Violations in the Context of Social Protests in Nicaragua” and presented to the Permanent Council on June 22 and July 11, 2018,

1. To reiterate its vigorous condemnation of and grave concern over all acts of violence, repression, and human rights violations and abuses committed by police, parapolice groups, and others against the people of Nicaragua, as documented by the IACHR; to encourage that steps be taken to identify the individuals responsible, through the corresponding legal procedures; and to demand that parapolice groups be disbanded.

2. To also condemn attacks on the clergy, the harassment of Roman Catholic bishops engaged in the National Dialogue process, and the acts of violence at the National Autonomous University of Nicaragua (UNAN), the headquarters of CARITAS, and against other peaceful protesters.

3. To urge the Government of Nicaragua and all the parties to participate actively and in good faith in the National Dialogue as a mechanism to generate peaceful and sustainable solutions to the situation unfolding in Nicaragua, and for the strengthening of democracy in that country.

4. To call on the Government of Nicaragua to consider all options to achieve this objective, to collaborate in the effective pursuit of efforts to strengthen democratic institutions in Nicaragua through the implementation of the recommendations of the OAS Electoral Observation Mission, and to support an electoral calendar jointly agreed to in the context of the National Dialogue process.

5. To support the recently established Interdisciplinary Group of Independent Experts (GIEI) to investigate the acts of violence which have been taking place in the country, as documented by the Inter-American Commission on Human Rights (IACHR), as well as the Special Follow-up Mechanism for Nicaragua (MESENI) and the initiative to strengthen democratic institutions advanced by the OAS General Secretariat, and to urge the Government of Nicaragua to provide the conditions necessary to allow these groups to fulfill their duties.

6. To reiterate the willingness of the Permanent Council to collaborate and consider all possible measures and mechanisms it deems appropriate to find a peaceful solution to the situation faced by Nicaragua, as provided for by the Organization’s regulations.

7. To invite the IACHR to keep the Permanent Council informed as to the functioning of the mechanisms specifically established by the IACHR to monitor the human rights situation in Nicaragua and the follow-up of the implementation of the recommendations contained in the report of the IACHR.

8. To request the Inter-American Commission on Human Rights (IACHR) and the OAS Department for Electoral Cooperation and Observation (DECO), the United Nations High Commissioner for Human Rights, the OAS Secretary General and the European Union to support the work of the Verification and Security Commission.