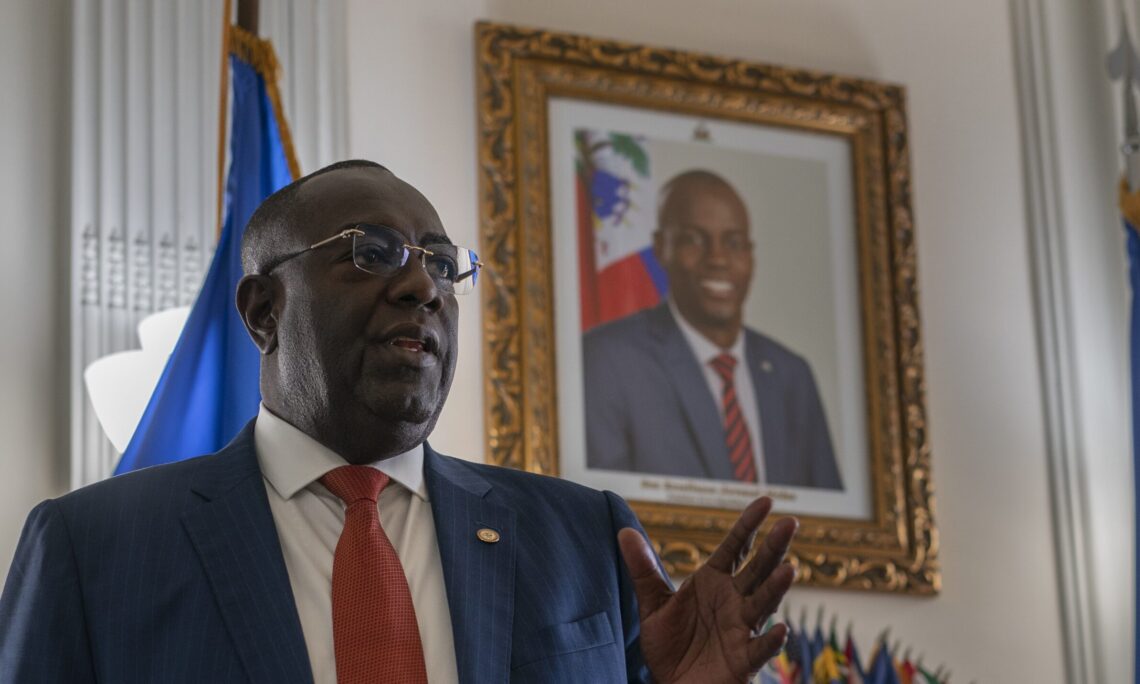 Ambassador Bocchit Edmond speaks of the late Haitian President Jovenel Moïse, during an interview with the Associated Press. A portrait of slain President Moise is seen on the wall behind, July 7, 2021. (AP Photo)

Remarks by
Bradley A. Freden
Interim Permanent Representative of the United States to the OAS
OAS Permanent Council Session on the Assassination of President Jovenel Moise
July 7, 2021

Thank you Chair for convening this special meeting of the OAS Permanent Council.

We were shocked and saddened to learn that President Moise was assassinated last night in his residence.  We met with him as part of the OAS Good Offices Mission just last month, and we believe that he was sincere in his efforts to negotiate with opposition representatives to organize legislative and presidential elections this year.

On behalf of my government, I would like to express our sincere condolences to the government and people of Haiti, and to the family of President Moise. May he rest in peace.

We call on the Haitian government to fully investigate this terrible crime.  We must determine who was responsible for the this heinous attack on Haitian democracy so that Haiti may bring the perpetrators to justice in accordance with the rule of law.

The United States is deeply concerned by the threat posed to the safety and security of the Haitian people and Haiti’s political stability.  Haiti faces several grave crises, including a lapsed legislature, serious security issues, a health emergency in the form of COVID 19, and great economic challenges.

This is a time for all Haitian stakeholders to come together, put aside personal ambitions, and compromise in the best interests of the Haitian people.  The people of Haiti are depending on you.  In the wake of this vile assassination, Haitians must join together to ensure peace and security, and to prepare for legislative and presidential elections this year.  This is the only way forward.  The people of Haiti need democratically elected leaders who can take action to re-establish security, rebuild confidence in the government, and re-invigorate the economy.

We say to the Haitian people, you are not alone.  We stand in solidarity with you.  The United States, in cooperation with the OAS, the United Nations, and Haiti’s many friends, stands ready to assist in the re-establishment security and democracy, but Haitians must lead.

As the second-oldest Republic in the Western Hemisphere and the first modern state to abolish slavery, Haiti has a proud history.  The Haitian people are strong and resourceful. In this time of tragedy and uncertainty, the patriotic leaders of Haiti must rise to the occasion, put aside their rivalries, and work together to overcome the interrelated challenges of security and democratic governance. They must delivery a secure and stable democracy that works for the benefit all  Haitians.

It is a time for national unity, for free and fair elections in accordance with the Haitian constitution, and for Haiti’s friends to rally around her in support of a peaceful, democratic end to the current crisis.

The Permanent Council of the Organization of American States (OAS):

HAVING received the sad news of a dastardly gun attack which occurred on Wednesday, 7th of July 2021 at the private residence of the President of the Republic of Haiti, and which resulted in the assassination of His Excellency, President Jovenel Moise, and serious injury to his wife, the First Lady of the Republic,