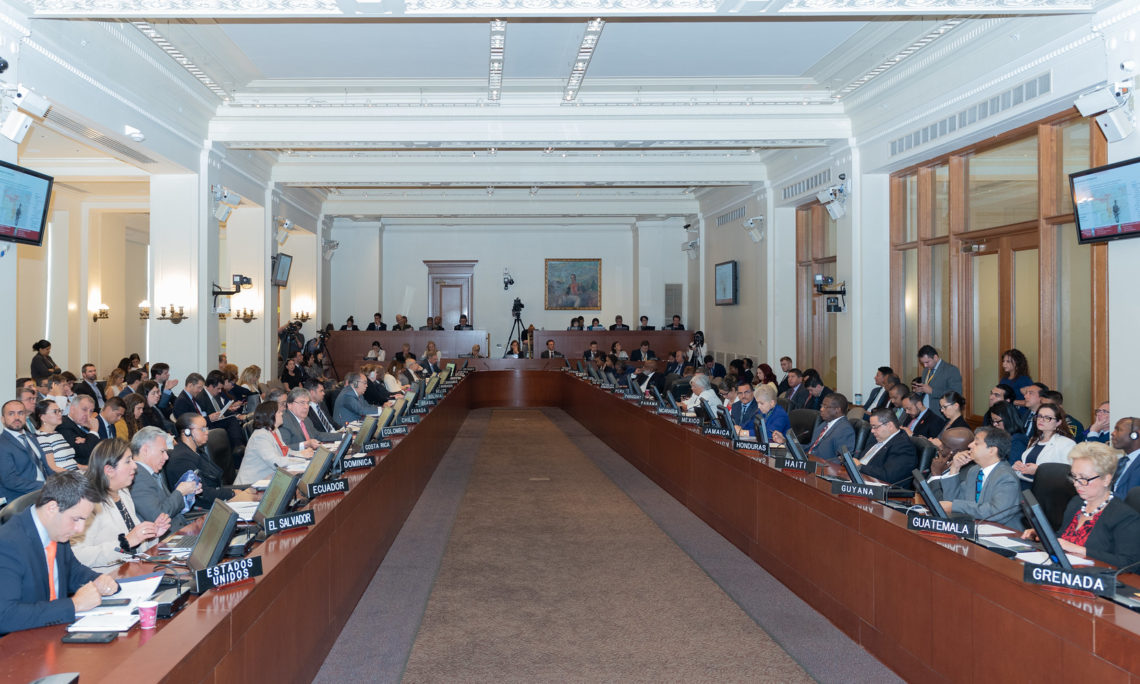 The OAS Permanent Council adopted a resolution condemning the lifting of the parliamentary immunity of deputies of Venezuela’s National Assembly during its meeting on September 11, 2019. (OAS Photo)

We appreciate the work of Colombia and other countries bringing this important issue to the attention of the Permanent Council.

Colleagues, let us be honest about what we are talking about here: the deliberate and systematic destruction of democracy in Venezuela. The illegitimate Maduro regime has undermined, overturned and assaulted Venezuela’s democracy in every conceivable way. They have committed systematic and brazen human rights abuses and violations, including extrajudicial killings and torture. They have orchestrated and implemented massively fraudulent elections. They have severely restrained all remnants of the free press. And since the opposition won a parliamentary majority in December 2015, they have sought to silence, delegitimize and ultimately delete Venezuela’s only remaining democratic institution – the National Assembly. The transparent reason behind lifting the parliamentary immunity for National Assembly deputies is to threaten, intimidate and – for all practical purposes – remove the deputies of the National Assembly from the political field. The purpose of lifting parliamentary immunity is to silence the voice of the Venezuelan people and to crush Venezuelan democracy itself. Any other purported claim is pure pretext and prevarication.

We are not alone in pointing out the obvious, that lifting Parliamentary Immunity is an effort to intimidate and silence political opponents. In May, the Inter-American Commission for Human Rights “categorically condemns the attacks on the National Assembly and its members. … and calls for the rights of the deputies and chief of staff of the acting president who are under arrest to be respected, including the right to personal freedom.” Similarly, in her report, Michelle Bachelet, the United Nations High Commissioner for Human Rights, noted the lifting of Parliamentary Immunity, and urged access to the jailed deputies.

We have been discussing and debating Venezuela in the OAS for years, as the situation in the country has continued to spiral downward and the suffering of the Venezuelan people has deepened and expanded. Meanwhile, some member states continue to argue that the OAS should not take sides, instead encouraging dialogue to reach a political solution. To these colleagues I ask: how does such dialogue work in this context? How can the Guaido government negotiate in good faith while the former Maduro regime arrests National Assembly deputies and threatens to arrest more, while forcing others into exile? If the former Maduro regime were truly committed to seeking a peaceful political resolution, would they be threatening and arresting opposition leaders?

OAS member states opposed to taking action also like to invoke the principle of non-intervention. About this I ask: If your neighbor’s house is burning down, do you stand aside and mutter that you shouldn’t intervene? Or do you help your neighbor put out the fire

Eighteen years ago on this very date the OAS General Assembly adopted the Inter-American Democratic Charter, “that the Charter of the Organization of American States recognizes that representative democracy is indispensable for the stability, peace, and development of the region, and that one of the purposes of the OAS is to promote and consolidate representative democracy, with due respect for the principle of non-intervention.”

According to the Democratic Charter, promoting and consolidating representative democracy is one of the core purposes of the OAS. It is why we are here. And it is why we are here now discussing the Maduro regime’s continuing efforts to crush Venezuela’s democratic system and to eliminate those who are fighting to defend and salvage it.

Those who truly care about democracy and democratic values must call out the lifting of parliamentary immunity for what it is: a direct attack at the heart of democratic values and institutions by the illegitimate regime in Venezuela.

Colleagues, we must stand with the brave women and men of Venezuela’s National Assembly in their valiant struggle to keep democratic values and ideals alive in spite of all the obstacles before them, in the teeth of the criminal regime’s brazen systematic efforts to snuff out these values and ideals. The time for excuses is over. The time to protect Venezuelan democracy is now. I strongly urge all OAS member states to uphold one of our core values by voting to support this important resolution.

RESPECT FOR PARLIAMENTARY IMMUNITY IN VENEZUELA

(Adopted by the Permanent Council at its regular meeting of September 11, 2019)

RECALLING that representative democracy is an essential precondition for the stability, peace and development of the region, in accordance with the Charter of the Organization of American States and the Inter-American Democratic Charter;

RECALLING resolution AG/RES. 2929 (XLVIII-O/18) of June 5, 2018, in which the General Assembly of the Organization of American States resolved that the electoral process carried out in Venezuela on May 20, 2018, lacked legitimacy;

ALSO RECALLING the provisions of resolution CP/RES. 1117 (2200/19) of January 10, 2019, in which this Permanent Council did not recognize the legitimacy of the presidential term 2019-2025 of Nicolás Maduro, for being the result of an illegitimate electoral process, and also emphasized the constitutional authority of the democratically elected National Assembly;

RECOGNIZING that resolution of the Permanent Council of the OAS, CP/RES. 1127 (2228/19) of May 13, 2019, affirmed that parliamentary immunity is a prerogative established in the Venezuelan Constitution that ensures the free exercise of parliamentary debate and prevents external pressures from impeding the effective work of representation of the people; and

UNDERLINING that resolution CP/RES. 1127 (2228/19) of May 13, 2019, also rejected the violation of the parliamentary immunity of representatives of the National Assembly and condemned the arbitrary detention of its First Vice President, Edgar Zambrano Ramirez,

1. To condemn the lifting of the parliamentary immunity of deputies José Guerra, Tomás Guanipa, Juan Pablo García and Rafael Guzmán, ordered on August 12, 2019, which constitutes a clear attack on the only legitimate and democratically elected body in Venezuela and another challenge to the rule of law.

2. To manifest its deep concern for the systematic undermining of institutions in Venezuela, particularly reflected by the continuous harassment of the deputies of the National Assembly of Venezuela, confirming an antidemocratic pattern of conduct inconsistent with the Inter-American Democratic Charter.

4. To reiterate its full support to the National Assembly of Venezuela.

5. To categorically reject the threat to unconstitutionally call for advanced elections of the National Assembly of Venezuela.

6. To continue monitoring the situation in Venezuela.